Completed in 1884, for Robert Goelet III (1841-1899) and his wife, Harriet Louise Warren (1854-1912). Robert was the brother of Ogden Goelet who a few years later built Ochre Court, one of Newport's most iconic chateaux, adjacent to Southside. Robert's house is situated on the Cliff Walk and costing some $300,000 it was the largest and most elaborate of McKim, Mead & White's new "rustic cottages". While Goelet and its architects referred to the house as "Southside," his daughter-in-law, Anne, later renamed it "Ochre Point" as she quipped the house was not on the south side of anything. Nonetheless, architectural historians refer to the house by its original name....
zoom_in 11 images 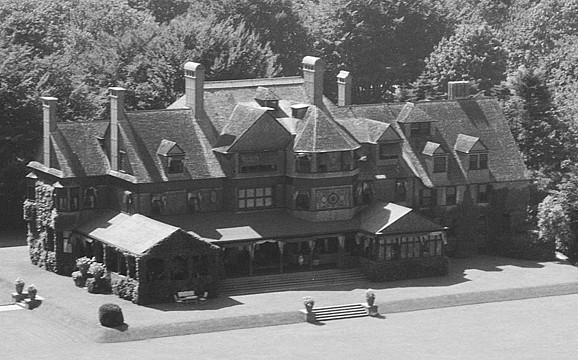 It was rare back then to see a shingle style house of such size (150-feet long by 50-feet deep) and internal opulence, and the critic Mariana Van Rensselaer thought it a mistake: "I think it is out of keeping both with the design and the interior". Nonetheless, today some historians regard Southside as, "a monument of the shingle style". Designed by Stanford White, the draftsman on the project was a young Cass Gilbert, the man behind New York's Woolworth Building and a future President of the American Association of Architects.

The house purposefully presented two fronts: a formal side facing the street, and a less formal side overlooking the ocean. On first glance, it can present the image of a simple, seaside home, but its scale and grandeur is immediately apparent on entering the oak-panelled hall draped in tapestries, "reminiscent of the manor halls of late Medieval England". The hall measures 44-feet long, 30-feet wide and reaches up 24-feet. The fireplace is large enough for a man to stand in and looking up, the gallery on the second floor is supported by balustrades, columns and arches with a projecting balcony.

The 7.5-acre plot of land on the southeast corner of Narragansett Avenue and Ochre Point Avenue cost Goelet $100,000 and the price of constructing the house - which took two years - came to $83,488. These numbers did not include the interior design nor the landscaping of the gardens which are thought to have cost a further $100,000. The Goelet's were survived by just one son, Bertie Goelet (1880-1941), who retained the house but spent more time in France than America. Nevertheless, Southside is one of the very few Gilded Age estates that - as of 2012 - is still owned by the same (Goelet) family.

Summer Houses by the Sea: The Shingle Style By Bret Morgan. Introduction by Laurie Ossman