Completed in 1892, for Ogden Goelet (1846-1897) and his wife Mary Rita Wilson (1855-1929). Ochre Court was built to outshine the Petit Chateau in Manhattan, and in turn, the Vanderbilts built Marble House, also in Newport, to outshine Ochre Court. It ranks among the most spectacular of Newport's Gilded Age chateaux and is also one of the Largest Houses in the United States: Ochre Court covers 44,229 square feet which makes it fractionally larger than the Vanderbilt Mansion at Hyde Park and Boldt Castle too. Since 1934, Ochre Court has been the heart of Salve Regina University and visitors are welcome to take tours on class days. In the movie True Lies (1994) its exterior was used to portray the Swiss château in the opening scene....
zoom_in 20 images 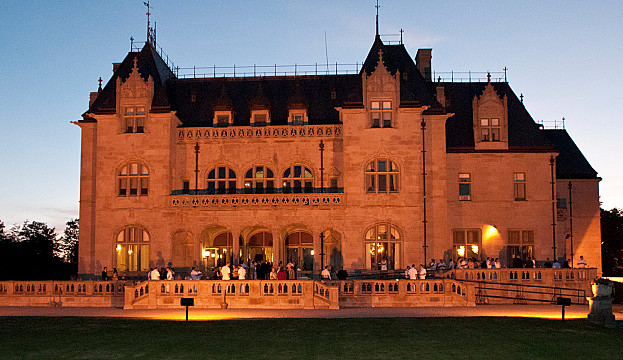 After the Astors, the Goelets were the second largest landowners in New York City. Their family fortune was established during the American Revolution and when Ogden and his brother, Robert, came into its possession one hundred years later (1879), it had grown to some $40 million, principally imbedded in Manhattan real estate and railroad bonds. Unlike preceding generations of the Goelet family who had gained a reputation for extreme miserliness, Ogden and his brother spared themselves no luxuries and Ochre Court is as good an example as any of their willingness to spend, dazzle, and impress.

In 1881, Ogden Goelet purchased Edgewater on the cliffs of Newport for $90,000 from Joseph Frederic Kernochan (1842-1929). Even before any money had changed hands, Ogden had already had architectural plans drawn up quietly for what he envisioned in its place. Nonetheless, he summered with his family at Edgewater for a further six seasons before work started on its grand transformation. In 1887, he purchased an adjoining parcel of land for his stables from George Peabody Wetmore (1846-1921), Governor of Rhode Island, and that year finally announced that he intended to pull down Edgewater.

Quite unabashedly, the Goelets hired Richard Morris Hunt (1827-1895), setting out to build a larger, more lavish version of Hunt's Petit Chateau in Manhattan, only recently erected for William Kissam Vanderbilt (1849-1920) and his first wife, the indomitable Alva. This not-so-thinly-veiled societal challenge was met with a quick response: within months, the Vanderbilts re-hired Hunt and started work on Marble House, also in Newport, in what was almost certainly a direct bid to now outdo the Goelet's château!
Hunt started work on both mansions in 1888, and both were completed in 1892. Whereas Alva went to great pains to keep Marble House hidden from prying eyes, the Goelets built theirs in full view and they must have taken some satisfaction when the local newspapers predicted that theirs would be the, "grandest of all the Newport manors, complete with a splendid garden and a great square portico". It was certainly grand: Ochre Court has 50-rooms, covers 44,229 square feet and cost an eye-watering $4.5 million.

Ochre Court is built of white Caen limestone and is punctuated with high slate roofs and gables in the Gothic style of 16th century France. Its rows of mullioned windows are identical copies of those found at the Château de Blois and others to a lesser extent were influenced by the Palais de Jacques Coeur. The grounds were laid out by the Olmsted Brothers, with formal perennial gardens and paths shaded by mature specimen trees that included the towering copper beeches.

Looking towards the ocean, the chateau has a double projecting terrace that opens up onto the lawn and two stone galleries with elaborately carved stone railings. The central room of Ochre Court is the Great Hall which rises up three stories high and is heavily influenced by the design styles of the French Renaissance: intricately carved wooden arches fringed with gilt lead up to the domed ceiling mural that crowns the vast space.

The principal reception rooms radiate off from the hall and each of them incorporate varying styles: the Tudor study is decorated with murals reminiscent of Holbein the Younger; one wall of the dining room was draped in a vast Gobelin tapestry; there was a Louis XV breakfast room; and, the ballroom was of German Rococo, though with the use of a great many mirrors it also resembled rooms found at the Palais de Versailles.

The richness and fine detail of the decorations are prevalent throughout with an array of classical ceiling paintings depicting mythical tales; a profusion of carved fleurs-de-lys representing the Goelet's French heritage; and, an extensive collection of antiques imported principally from France and Germany that include vast fireplaces, marble statues, stained glass windows and, of course, the furnishings. All this was lit up with its own electricity generator - one of the first of its kind in Newport.

During the typical 8-week summer season at Newport, Ochre Court required 27 house servants; eight coachmen and grooms; and, twelve gardeners. When Grand Duke Boris Vladimirovich (1877-1943) of Russia stayed as a guest at Ochre Court in the 1890s, he was heard to exclaim, "I have never dreamt of such luxury as I have seen in Newport!"

Only five years after Ochre Court was finished, Ogden Goelet was accidentally run down by a car during the Cowes Regatta on the Isle of Wight. His distraught widow upped and left for Europe with their two children and only returned to the States three years later.  That season (1900), she came back to Newport and re-opened Ochre Court to host the coming out/debutante ball of her only daughter, Mary Goelet (1878-1937).

In 1903, all eyes of Newport's fashionable society once again turned to Ochre Court when Mary's wedding reception was held here following her marriage to Henry Innes-Ker, 8th Duke of Roxburghe. The dashing Duke was a first cousin of Sir Winston Churchill, who he knew well being all but the same age, and the $8 million dowry his new wife took back to Floors Castle was given a further $20 million boost after her mother's death in 1929.

In 1904, Mrs Goelet gave Ochre Court to her only son, Robert Wilson Goelet (1880-1966) as a wedding present for him and his first wife, the broodingly good-looking, artistically inclined Elsie Whelan (1880-1959). While he worshipped her, she was careless of him and his money, and yearned for an artistic life. After ten years, she divorced him and then shocked everyone when she fled American society with her new husband, the eccentric sculptor Henry Clews Jr. (1876-1937), taking up residence with him on the French Riviera.

As the First World War continued to rumble on in a bloody stalemate across the north of Europe, Robert's ex-wife left for a life of idle pleasure in the South of France, while Robert headed to Northern France as a Captain to fight in the trenches. While on leave in Paris, he met another beauty, the married Fernanda Riabouchinsky (1885-1982) whose background was as dubious as that of her husband's empty claim to be a Russian Prince.

The Riabouchinskys came to the United States soon after 1918 and so ensued a scandalous year: Fernanda, still married to her 'Prince', was now frequently seen out in public with Robert, bedecked in ever-increasing displays of sparkling jewellery. Tongues wagged even more when Robert was seen in angry remonstrations with Fernanda's now bankrupt 'prince', and they went into a frenzy when it was heard that Fernanda might star in a movie wearing next to nothing! In 1919, Fernanda obtained a divorce from her husband before Robert whisked her off to Paris where they were discretely married.

Robert's mother was beside herself with anger. She refused to acknowledge her Russian daughter-in-law, let alone the marriage, and couldn't even bring herself to be on the same continent as the newly-weds, removing instead to Floors Castle with her daughter.

Undeterred, Robert and Fernanda returned to the States and attempted to carry on as usual. They opened Ochre Court for the season and sent out invitations... only to be met with embarrassing results. In return, the few invitations that came through the door at Ochre Court were addressed only to Mr Goelet, never "... and Mrs Goelet". Even from the remote grouse moors of Scotland, Robert's redoubtable mother maintained her considerable reputation as one of the leading hostesses in America and she made it very clear that anyone who recognized her son's new wife would be snubbed for life. Only her own sister, Grace, who'd previously eloped with Cornelius Vanderbilt III, dared defy her.

Home is where the Heart is...

Robert and Fernanda retreated back to Paris where they had a son, but she quickly tired of the struggle to achieve social prominence and fell in love with a man far removed from the world she'd been living in. Robert cut his losses and they divorced in 1924. The following year, he was married for a third time, but this time to a Newport girl, Roberta Willard (1893-1949), and with this happy news his mother finally returned to the States.

The End of the Era

By the Second World War, Robert and Roberta were finding the cost of opening Ochre Court for the eight week summer season a serious financial burden. For several years, they rented smaller properties in Newport before eventually buying Champ Soleil that required a mere five servants as opposed to the thirty needed at Ochre Court.

But, disposing of Ochre Court had not been easy: the real estate market was on its knees, so there was no hope of selling Robert's relic of better times. He offered it first to his youngest daughter, Mary Eleanor Goelet, who was then studying at Vassar College, but it was not practical for her and she turned down her father's generous offer. Then, in the knowledge that the United Nations was looking for a new home, Goelet proposed donating Ochre Court for that purpose, but the competition was stiff and his offer was politely declined. In 1947, he at last found a willing recipient in the Sisters of Mercy.

In 1934, the Sisters had established Salve Regina University, but they were lacking a building to house their project. Delighted with the acquisition of Ochre Court, the Sisters hired a special architect to carefully reconfigure the chateau so as not to spoil its magnificent interior, and classes were first held here by the end of the year.

Today, their campus covers some 60-acres and is comprised of almost a dozen historic buildings in the area, but Ochre Court remains very much the heart of the university. During class days, visitors are welcome to the building and a great many make the detour off the Cliff Walk to enjoy its grounds. In 2000, Ochre Court was added to the Save America's Treasures program, led by the National Trust for Historic Preservation.

A Gilded Grave By Shelley Freydont