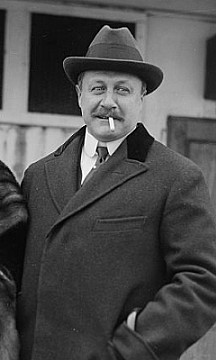 He was born in the same year and looked remarkably similar to his first cousin, Robert Wilson Goulet (1880-1966), and so from an early age he went by the name of "Bertie" to distinguish between them. In 1902, they both graduated from Harvard. That same year Bertie's only sibling, Beatrice, died leaving him as sole heir to $60 million. He owned several homes including an apartment in Paris, a fishing lodge on the Restigouche River in Canada, and Southside, but his favorite residence was the Chateau de Sandricourt that sat on an estate of 10,000 acres with 139 buildings.

For a period, he was obsessed with the English heiress renowned for breaking hearts, Muriel Wilson, but after that infatuation he married his French wife, the daughter of one of France's wealthiest wine merchants and a passionate breeder of thoroughbreds. In his will, Bertie left the Ritz-Carlton Hotel in Manhattan and the land on which it stands, free of any mortgage, to Harvard. He gave the yacht commissioned by his father, Nahma, to the US Navy for use during WWI. He and wife were the parents of four children.