Completed in 1886, for James G. Blaine (1830-1893) and his wife, Harriet Stanwood (1827-1903). After a particularly hard-fought - and dirty - campaign, Blaine lost the U.S. Presidential election to Grover Cleveland by a whisker in 1884. Retirement was now at the forefront of his mind and the following year he commissioned the firm of Furness & Evans to build him and his wife a summer home at fashionable Bar Harbor in their native Maine. Furness was the former partner of John Fraser, the architect who'd completed the Blaine Mansion in Washington D.C. just four years earlier, and which still stands. Their summer home wasn't so lucky and was one of the 397 summer cottages that were burned in the Maine Fires of 1947 that left 2,500 people homeless....
zoom_in 4 images 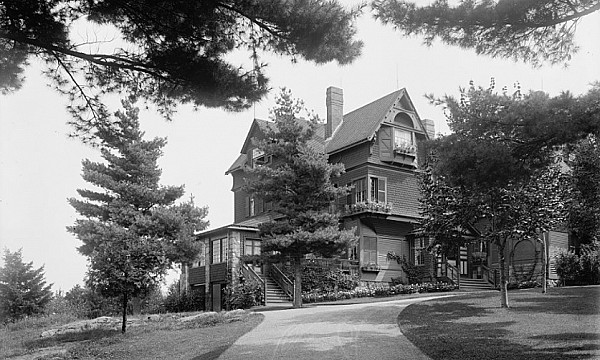 Owing all his success to his wife's family money, Blaine first bought her the Blaine House in Augusta which was their principal residence for 40-odd years. But, having been accused of fathering a child out of wedlock during the Presidential battle, the famously smooth-talking Senator was careful to name their new summer home for her family: "Stanwood".

Blaine did not run again for election, but in 1889 he accepted the position of U.S. Secretary of State under President Benjamin Harrison who was a guest at Stanwood for six days that August. Already in ill-health and having lost two of his adult children in quick succession, he retired in 1892, and died the following year. His family continued to summer here and Stanwood eventually devolved to his daughter, Margaret, and her talented husband Walter Damrosch, the long-time and celebrated director of the New York Symphony Orchestra.

The Damroschs were the last owners of Stanwood which is recalled in the childhood memoirs of their daughter, Gretchen, entitled From the Top of the Stairs. and published in 1946. The following year, the Maine Fires swept through Bar Harbor and took Stanwood with it. Today, the Atlantic Eyrie Lodge now stands on the land on which it once stood.

Summer Houses by the Sea: The Shingle Style By Bret Morgan. Introduction by Laurie Ossman

From the Top of the Stairs By Gretchen Damrosch Finletter