Built in 1845, for Peter Gerard Stuyvesant (1778-1847) and his second wife, Helena Rutherfurd (1790-1873). Stuyvesant died just two years later and he left the house to his grand-nephew (the eldest son of their adopted daughter and niece) on the condition that he changed his name from Stuyvesant Rutherfurd to Rutherfurd Stuyvesant. But, being then only four years old, until he reached adulthood the house was deeded to his father, the renowned amateur scientist, Dr Lewis Morris Rutherfurd (1816-1892). From 1849 to 1856, Dr Rutherfurd lived in Europe (France, Italy and Germany) and while there met some of the leading scientists of the day. On returning to New York he built, "a small but excellently equipped observatory" in the backyard from which he took groundbreaking photographs of the sun, moon and stars for which he is remembered today. The observatory was, "a circular brick building of 20-feet internal diameter with a light revolving roof supported on twelve wheels"....
zoom_in 5 images 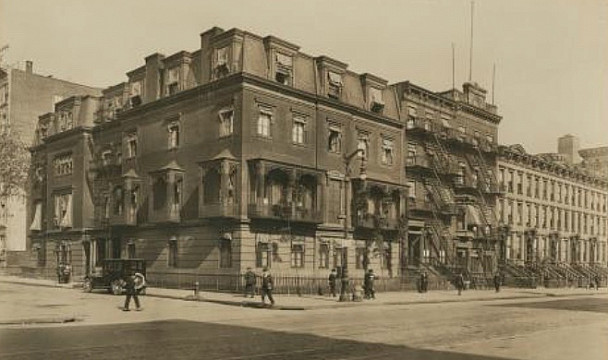 The house itself was described as "very large". The first story was made of brownstone while the three above were constructed with red brick. The windows on the second floor were coupled with ornate, wrought-iron balconies that overflowed with wisteria.

Dr Rutherfurd's observatory, "housed 'a very substantial instrument,' an equatorially mounted telescope whose 'objective is of 11.25 inches aperture, and 14-feet focal length, and was corrected for figure by myself (Dr Rutherfurd) after the methods and directions of Mr (Henry) Fitz'. It was fitted with 'a driving clock of the highest merit' constructed by Messrs. Alvan Clark & Sons. In the house nearby was a workshop with tools fitted for optical and mechanical work of the highest precision".

Dr and Mrs Rutherfurd remained in the house up until about 1885 when they retired to the old Stuyvesant Mansion in New Jersey. Their son - who built the first purpose-built apartment block in New York - then converted the mansion into apartments, adding a fourth story and replacing the original entrance that had been on 2nd Avenue with a new one on 11th Street. Once divided up, it could accommodate seven families.