Completed in 1900, for Amos Tuck French (1863-1941) and his first wife, Pauline LeRoy (1864-1928). Designed by the architects Warren & Wetmore, it was situated on a wooded hillside on the west side of Cliff Road overlooking Tuxedo Lake with 14-bedrooms and five bathrooms. Back in 1888, French was living at "Saddlerock" also in Tuxedo Park and quipped that, "I do not expect to move again until I go to the White House". He didn't get to the White House, but on moving to Tuck's Eden his new home was certainly of Presidential proportions. In the early 20th Century, the French family made something of a habit of fuelling the society gossip columns with scandal, and it would appear that back then Tuck's Eden was rarely a dull place to be....
zoom_in 2 images 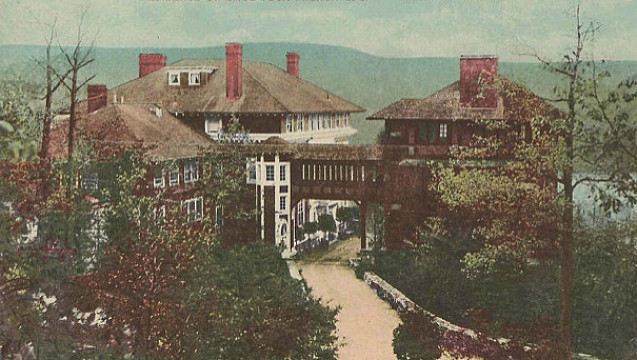 Amos Tuck French was the son of the President of the Manhattan Trust Company and a nephew of the famously philanthropic Edward Tuck. who made France his permanent home from 1890. Amos was one of three children and the brother of Mrs Elsie Vanderbilt and Lady Cheylesmore. In 1884, he married Lena LeRoy, a great-granddaughter of Herman LeRoy, President of the Bank of New York. In 1888, he was appointed Treasurer of the Manhattan Trust Company and built a "moderate-sized" home at Tuxedo Park that he named "Saddlerock" from where he made his daily commute to Wall Street. But in the same year (1899) that his wife bore their fifth child (of six), he sold Saddlerock for $20,000 and built Tuck's Eden into which the family moved in the Spring of 1900.

Tuck's Eden was to be their winter residence with summers divided between Europe, Newport, and Chester, New Hampshire. In 1908, French's sister, Elsie, retreated here to hide away from the press while she went through her divorce with Freddy Vanderbilt. But, if the press were disappointed that Elsie went to ground and didn't add any further spice to their gossip columns, the French family did not disappoint them for long.

In 1911, Elsie's favorite niece, the just-turned eighteen year old Julia French, eloped with the family's chauffeur, "Handsome Jack" Geraghty. In what sounded like a mash-up between a Charlie Chaplin movie and Downtown Abbey, Elsie set off in her fastest automobile in hot pursuit of the young couple, accompanied by a bevy of concerned relatives and followed by two further cars containing six Newport policemen and Boston detectives. The chase continued into the night but the lovers got away and were married in Connecticut. If Elsie had been press-shy, her niece was not, and took a delight in amusing the press who'd gathered outside the humble home of her husband's shell-shocked aunt!

The Apple Doesn't Fall Far From the Tree...

The rift in the family that was caused by Julia's elopement was also said to have been the precursor to the collapse of Amos and Lena's marriage. They were divorced in March, 1914, but it would seem that they had in fact drifted apart many years before and separated in 1911. Whereas Amos was one of the leading lights in Gilded Age society, Lena shrank from it, and not long after their marriage the invitations to various dinners, balls etc that piled in at Tuxedo were soon only addressed to him. To exacerbate matters, Lena never accompanied him on his trips to Europe and he soon came to "hate" her beloved Newport.

Just eight months after their divorce was announced, Amos caught everyone by surprise when he made his own announcement: not that he was engaged to, but that he had married Martha Beeckman, the sister of sister of Rhode Island's Governor R. Livingston Beeckman and sister-in-law of Louis Lasher Lorillard. Similarly, five years later, Julia had divorced "Handsome Jack" and publicly announced at Newport that she was to marry Howard Williams - who was not present at the announcement. When the press asked him to comment about his upcoming nuptials, he admitted it was the first he'd heard of it!

You Can Choose Your Friends...

Fortunately for Julia, she wasn't the only one of her siblings to cause her parents a headache. In 1915, Amos berated his sixteen year old son Ned for his "unacceptable behaviour" and the following year he was packed off to the Beacon Sanatarium - his great-uncle had said that the only alternatives for the boy were "jail or an asylum". He graduated from Harvard the following year (1917) but that summer rolled his car twice in Newport and although he escaped uninjured, he was badly shaken. In 1918, he was supposed to be on his way to Junior Officer's Training Camp in Plattsburgh when he made the headlines in Boston after marrying a telephone operator on a whim.

If Ned and Julia were reckless in love, it was nothing compared to their elder brother's spectacular fall from grace. It's fair to say that the career of Francis Ormond French II was the polar opposite of his distinguished grandfather whose name he bore. His street paving business failed in 1914 and his subsequent career in stockbroking was less about brokering and more about going broke. By 1923, the nephew of the former Mrs Vanderbilt and the 3rd Lady Cheylesmore could now be found driving a New York City taxicab. By 1933, Frank's great-uncle Edward Tuck - "the Dean of the American Colony in Paris" whose art collection alone was valued at $5 million - refused to give his erstwhile grand-nephew another dime, declaring Frank "a moron". Nonetheless, the next year saw Frank become the father-in-law of none other than John Jacob Astor VI while at the same time voluntarily declaring himself bankrupt, listing his assets at $300 and liabilities at $4,907. In 1935, he embarked on a new career in Boston as a golf club and accessories salesman.

On retiring from Wall Street in 1907, Amos closed up Tuck's Eden for the next three years as he spent much of his time abroad. He returned in 1910, but privately complained that Lena neither liked living nor entertaining at Tuxedo Park. Fortunately for him his new wife did enjoy Tuxedo and he retained it as his winter residence up until at least 1935.

Amos retired permanently to what had been his summer home ("Journey's End") in New Hampshire where he died in 1941. It's not entirely clear what then happened to the house, but his erstwhile son, Frank, ended up living at another house in Tuxedo Park and died there in 1962 having redeemed himself to the point that The New York Times now described him as a "Civic Leader". At about the same time that Frank died it was reported that a new structure had been built, "on the ruins of the Amos Tuck French House".

Tuxedo Park : A Wall Street Tycoon and the Secret Palace of Science That Changed the Course of World War II By Jennet Conant