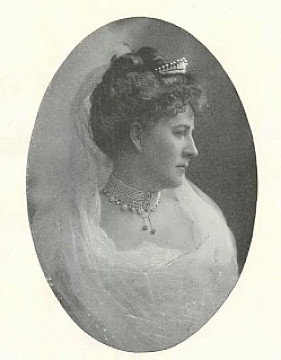 She was born at Boston, Massachusetts, and was the sister of Mrs Elsie Vanderbilt and Amos T. French. She grew up between New York City and Newport, Rhode Island. In 1892, she was married at the Guard's Chapel in Windsor Castle to Colonel Herbert Francis Eaton, of the Grenadier Guards, who in 1902 succeeded his elder brother to become the 3rd Baron Cheylesmore. Herbert's mother was also an American, being the only daughter of Thomas Leader Harman, of New Orleans, Louisiana. Bessie's bridesmaids on their wedding day included Flora Davis and Antoinette Pinchot.

Having originally met in Bermuda, when Bessie settled in England, "she became at once immensely popular in the smart military world" and was predicted to become one of London's most prominent hostesses: "As Mrs Eaton, she often entertained the Duke of Cambridge who was exceedingly fond of her; and, she and Lord Cheylesmore made a valuable addition to the group of hosts and hostesses of Royalty". She and her husband were enthusiastic golfers and spent part of every year at Cheylesmore Lodge in North Berwick. Their other residences were: 16 Princes Gate (next door to J.P. Morgan) in London; Cooper's Hill Park at Englefield Green, Surrey; the Villa Saint-Priest at Cannes on the Cote d'Azur; and, Easter Elchies at Craigellachie in Banffshire. Bessie remained in Europe after her husband's death in 1925 but returned to America during World War II (1941) taking rooms at the Muenchinger Hotel in Newport where she died.