Built from the 14th Century by the Monastery of Île Saint-Honorat that lies off the coast of Cannes. During the 18th century the house was used by pirates to store their contraband. It was gradually expanded until about 1880 and was given its present appearance from 1926 by the American couple Herman Livingston Rogers (1891-1957) and his first wife, Katherine Moore (1894-1949). The Rogers were the intimate friends of Wallis Simpson and the future King Edward VIII and it was here that Wallis fled while Edward abdicated from the British throne and here that they honeymooned in the winter of 1937-38. The 15-room house of rose-pink stone still sits on 2.5-acres at an elevation of 350-feet overlooking Cannes, the Mediterranean, and the Esterel Mountains....
zoom_in 15 images 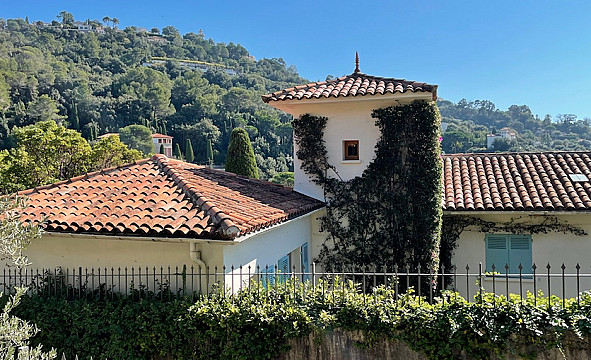 Herman Livingston Rogers grew up at Crumwold Hall in the Hudson Valley north of New York City where a young Franklin D. Roosevelt was a familiar face, learning German in the 'turret room' with Herman's elder brothers under their governess, Fräulein Reinhardt. Herman was a great-great grandson of merchant Moses Rogers and though his father was a millionaire in his own right, the majority of the Rogers fortune came through his mother's family. He started life as an engineer but at Peking at the age of 32 he took early retirement to, "devote himself to a life of travel and self-cultivation". In 1924, he bought this villa in the South of France and kept houses in Hyde Park (New York) and London.

In 1871, what would become the Rogers' villa was bought up by Charles Bourgeois de Mercey (b.1839) to form part of the estate on which he built the magnificent but since demolished Villa Isola Bella. In 1924, that estate was subdivided and the Rogers' bought Lot 13 on which their villa stood. They gave it the name Lou Vieï and two years later (1926) expanded and modernized the house and gardens, all but giving it its present appearance.

Before marrying Herman Rogers, Katherine had been the wife of Naval officer, Ernest A. Bigelow. In 1916, while the Bigelows were based at Coranado, California, Katherine became friends with a young Wallis Simpson who was then also married to a Naval officer, Win Spencer. In 1924-25, following her divorce from Commander Spencer, Wallis toured China - her 'lotus year' where she was supposed to have honed both her social and sexual skills - and while in Peking (Beijing) she stayed as a guest with the Rogers. During that time they cemented their friendship and Wallis was first invited to Lou Vieï in the summer of 1927 when, by telegram, she accepted the proposal of her second husband, Ernest A. Simpson.

Wallis married Simpson in 1928 but their relationship was soon eclipsed by her affair with Edward, Prince of Wales. While still married to Simpson, Wallis and the Prince spent the summers of 1934 and 1935 as guests of the Rogers at Lou Vieï. In January, 1936, Edward was crowned King of England and that September he and Wallis once again joined the Rogers, this time on board the yacht Nahlin which they'd chartered to tour the Adriatic Sea. It was after that voyage that Edward determined to abdicate the throne in favor of marrying Wallis. While he resigned his Royal duties on December 5th, Wallis had already taken Edward's Rolls-Royce to Lou Vieï, accompanied by Inspector Evans of Scotland Yard who made arrangements with the French police to have the household protected.

"We Will Never Forget a Great Friendship"

Despite Evans' best efforts, the morning after Wallis arrived at Lou Vieï she woke up to discover the world's media camped outside the villa. In just the first month of being there, no less than 5000-letters were delivered to Lou Vieï addressed to 'King Edward's Whore'. During the day, Herman Rogers acted as Wallis' press officer and intermediary while at night he slept in the room next to hers with a loaded gun on his bedside table - an Australian had written several times threatening to put a bullet through her.

This period put considerable strain on all the relationships within the villa. Wallis called Edward "a God-damned fool" for abdicating - furious that she would now never be Queen and in the process making her the most hated woman in the world. To further muddy the waters, she later admitted that Herman Rogers had been her only true love and he in turn had had to tell her firmly, "you can't go beyond that wall," meaning into his bedroom.

In March, 1937, Mrs Rogers organized to have Wallis quietly moved up to the Château de Candé in the Loire Valley that belonged to her controversial friends Charles and Fern Bedaux. Three months later, Wallis and Edward were married there and Herman Rogers gave the bride away. Now styled the Duke and Duchess of Windsor, they gave Herman a gold Cartier cigarette box. On the inside of the lid it was inscribed: "We will never forget a great friendship. Edward and Wallis." Two dates were given under the wording, the first being the date of Edward's abdication and the second being the date of their wedding.

Wallis and Edward spent a substantial part of their honeymoon at Lou Vieï in the winter of 1937-38. It was most likely to make their stay more comfortable that Herman Rogers employed the modernist American architect Barry Dierks (who'd relocated to nearby Théoule-sur-Mer in 1925) to add an extra wing, a new entrance, a patio, and a garage. Entertainments were often held on the patio which was lit with Chinese lanterns.

Gardens, Views, and the Villa Today

Further maintenance was carried out on the facade in 1947. Mrs Rogers died at Lou Vieï in May, 1949, and in August the following year Herman re-married Mrs Lucy Fury Wann when further work was carried out on the interiors. The new Mrs Rogers was the widow of the British Air Commodore Archibald Wann. They were married at the Town Hall in Cannes, where the Windsors acted as witnesses, and the wedding reception was held at Herman's 3-story villa. He died in 1957 and sometime afterwards Lou Vieï was put up for sale. The sales catalogue ("price on request") described the gardens and views:

The terraced gardens are embellished with citrus trees, ancient olives and oaks, mimosa, roses, bougainvillea and bignonia; the walls of the driveway are covered with masses of sweet peas. Across the patio, an octagonal pavilion connected by an arched cloister is an adaptation of Henry IV's Aix-en-Provence shooting lodge... All of the bedrooms have balconies commanding sweeping views of mountains and sea.

Its ownership from circa 1960 is unclear, but it remains a private residence as the home of Michèle Loridan. He employed the architects Pierre Fauroux of Cannes and Christian de Portzamparc of Paris to carry out recent renovations. Privacy is to be respected.

Riviera Dreaming: Love and War on the Côte d'Azur By Maureen Emerson

The Woman Before Wallis: A Novel of Windsors, Vanderbilts, and Royal Scandal By Bryn Turnbull

17 Carnations: The Royals, the Nazis, and the Biggest Cover-Up in History By Andrew Morton

Wallis in Love By Andrew Morton

Riviera Gold: A Novel of Suspense By Laurie R. King