Built in 1886, for Georges Guignard de Saint-Priest (1835-1898), the unmarried Comte de Saint-Priest who was "an old friend" of Edith Wharton's mother. He died here in 1898 and by 1903 his former home had become the seasonal home of Grand Duchess Maria Alexandrovna of Russia, Princess of Saxe Coburg and Gotha, who was widowed three years before when she lost her husband, the Duke of Edinburgh, younger brother King Edward VII. She entertained here with three of her four daughters (Marie, Victoria and Beatrice) whose beauty and affability charmed Cannes society. Their tenure directly mirrored Canne's golden era and the numerous garden parties, dinners, and balls they hosted here attracted the very best of society from the Cote d'Azur....
zoom_in 1 images 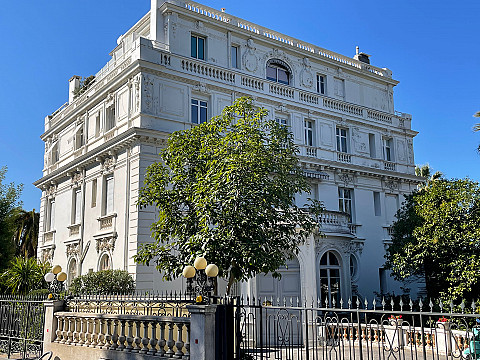 In 1906, another widow, Mrs Ellen French, purchased the villa for $80,000. She was the widow of the President of the Manhattan Trust Company and perhaps more notably the only sister of the famously philanthropic Edward Tuck who moved permanently to France from 1890 and whose generosity to his adopted country made him almost a household name. Ellen divided her time between here and Harborview in Newport, Rhode Island, and was visited at least once a year by her three children who included her youngest daughter, Elsie, then married to Freddy Vanderbilt. After she died in 1915, she left the villa to her elder daughter, Bessie, the wife of the 3rd Lord Cheylesmore.

The Cheylesmores were frequently visited by the French society leader André de Fouquières who remembered them in his memoirs as excellent hosts who gave the best welcome. In 1925, Lord Cheylesmore became the first British peer to die in an automobile accident. His widow continued to come here up until the outbreak of the Second World War. In 1951, six years after her death, her son sold the villa and after Lord Brougham's it became one of the first of Cannes' grand residences to be divided into apartments.

Above the Bay of Angels: A Novel By Rhys Bowen

Riviera Dreaming: Love and War on the Côte d’Azur By Maureen Emerson

The Riviera House By Natasha Lester