Built in 1865, for Ayres P. Merrill (1825-1883), a plantation owner at Natchez, Mississippi, and the former U.S. Minister to Belgium. It was located on Wellington Avenue by the Ida Lewis Yacht Club and was designed by the Newport's pre-eminent architect of that period, George Champlin Mason Sr. Just five years later (1870), Merrill sold the estate to Stephen Whitney Phoenix, of New York, a wealthy scholar who dedicated his life to Egyptology, genealogy, and travel writing....
zoom_in 2 images 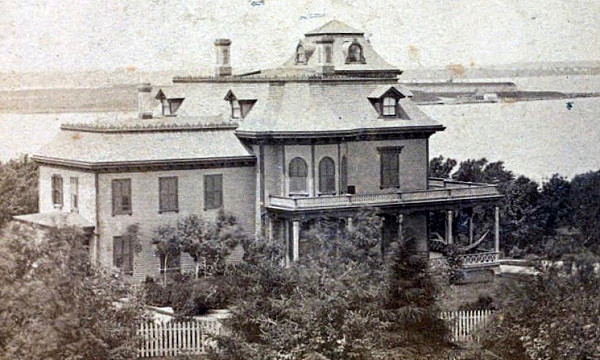 Stephen Whitney Phoenix was described as a, “fine Greek and Latin Scholar, rich as Croesus and simple in his habits as Ochiltree”. He died just six years later (1881) and in the same year his heirs sold Harborview to the newly retired banker, Francis Ormond French (1837-1893), of New York. After he died in 1893, his widow divided her time between here and her magnificent villa in Cannes on the Cote d'Azur, Villa Saint-Preist.

In 1908, the younger daughter of Mrs French divorced Freddy Vanderbilt and after a brief sojourn at Tuck's Eden retreated here to avoid the media spotlight. Not long afterwards she met her second husband, Paul Fitzsimons, and lived here quietly with him throughout the year until her death in 1948. As her mother had left the estate to her, she in turn left it to her eldest son, William Henry Vanderbilt, Governor of Rhode Island, who immediately sold it and two years later (1950) it was demolished for residential subdivision.

A World Beneath the Sands: The Golden Age of Egyptology By Toby Wilkinson