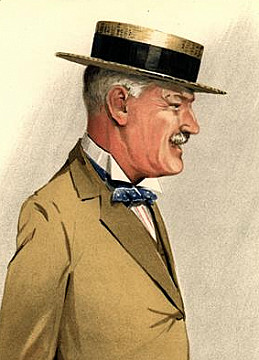 He was the third and only surviving son of the 1st Lord Cheylesmore who made a fortune in the silk trade and through insurance. He grew up between 16 Princes Gate in London and Tyttenhanger Park, Hertfordshire. He was educated at Eton where he was nicknamed "Cheeky Eaton" and at the age of twenty was commissioned into the Grenadier Guards. In 1891, "as some curious punishment" his entire battalion was sent to Bermuda following an act of insubordination. There, he met Bessie French, the eldest daughter of Francis Ormond French, of New York City, whose sister was the first wife of Freddy Vanderbilt. They were married the following year at the Guard's Chapel in Windsor Castle when he was described as being, "a very good and very popular Colonel".

In 1902, he succeeded his elder brother as the 3rd Lord Cheylesmore. Before World War I, he was Mayor of Westminster and Chairman of the London County Council. During the war, he was appointed Commandant of the School of Musketry at Bisley and presided over several court martials including sentencing the spy Carl Hans Lody to death. He and his wife had two sons and lived between: 16 Princes Gate in London; Cooper's Hill Park, Surrey; Cheylesmore Lodge in North Berwick; Villa Saint-Priest at Cannes on the Cote d'Azur; and, Easter Elchies at Craigellachie in Banffshire. He was the first peer to die in an automobile accident, meeting his end in 1925. His and Bessie's mausoleum at Highgate Cemetery in London was designed by the New York firm of Carrère & Hastings.