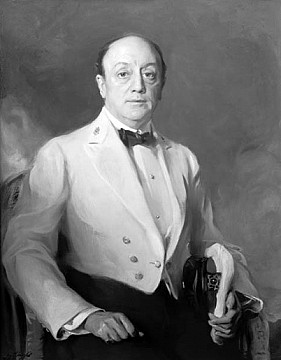 He was born in Manhattan, New York, a nephew of "Boss Croker" the former Leader of Tammany Hall. He was educated at St. Francis Xavier's College and Columbia Law School (1896) before becoming a partner in the legal firm of Douglas, Armitage & McCann. In his early years he was an Assistant District Attorney, Corporation Counsel for Poughkeepsie, and took an active interest in Catholic youth movements. In 1904, he married Helena, the eldest of the three daughters and co-heiresses of F.W. Woolworth. Through his marriage he became President of the of the Broadway Park Place Company that owned the Woolworth Building and was the attorney for his father-in-law's estate in 1919. He had a reputation for being one of society's best dressed men and was a member of a number of clubs in New York City, Long Island and Florida.

He retired in 1933 having already amassed a considerable art collection that boasted several works by Frans Hals. He maintained a 247-foot diesel-powered yacht, Chalena, and kept one of the last coaches to be driven on Long Island. He and his wife lived between 2 East 80th Street in Manhattan; the ill-fated Sunken Orchard on Long Island; "the magical architectural collage" that is Beaufort in Gloucester, Massachusetts; 'El Azulejo' at 6 Golf View Road in Palm Beach, Florida; and, for a few years in the 1920s they sporadically used Lena's father's spooky country estate, Winfield Hall. Their four children inherited about $20-million each, almost entirely from the Woolworth estate.

Gilded Age Patrons of the Arts