Completed in 1916, for Fay Ingalls (1882-1957) and his wife Rachel Gaff Holmes (1885-1966). Six years later, the 29-room Georgian-style mansion on Long Island's North Shore was bought by one of the Woolworth heiresses but is unfortunately still best associated with what Life magazine referred to in 1955 as "the shooting of the century," since popularized by the publication of three books (This Crazy Thing Called Love, The Two Mrs Grenvilles and Answered Prayers). The main house and gardens remain privately owned, therefore privacy is to be respected. However, the music room that once formed part of a separate outbuilding known as "The Playhouse" (where the shooting took place) is today the St. Pius V Chapel which is open to the public....
zoom_in 16 images 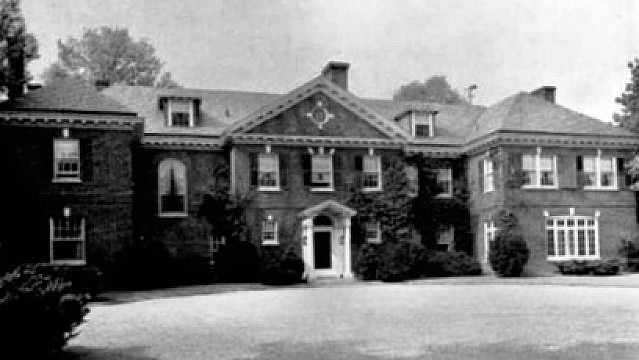 Ingalls was a younger son of Melville Ezra Ingalls (1842-1914), President of the Big Four Railroad, co-founder of the Cincinnati Art Museum, and a candidate for the U.S. Presidency at the turn of the last century. Originally a lawyer, Fay Ingalls successfully entered the munitions business during World War I, but growing tired of Manhattan's greed and corruption he quit his job and removed to The Yard in Virginia where he ran a luxury hotel. He is remembered today as a conservationist, outdoorsman, author, and diplomat. His wife, Rachel, was a noted horse rider until left crippled by an accident.

George Bruno de Gersdorff (1866-1964) was an architect who had trained with the celebrated firm of McKim, Mead & White from 1895 to 1912. In 1914, the Ingalls' hired him to design their three-story, 29-room, Georgian-style mansion with an interior featuring old oak-panelled rooms and frescoes on the walls depicting rural scenes.

Set amid beautiful rolling countryside and mature woodland, the estate itself contained several outbuildings and encompassed a working farm with chickens, ducks, and a vegetable garden. There were two sizeable hidden ponds and also two orchards plus a further "Sunken Orchard" for which the house is named. The landscaped gardens surrounding the main house were designed by Innocenti & Webel, the same men who were responsible for those at Clarendon Court and Champ Soleil among others. The excellent blog halfpuddinghalfsource vividly describes its rich gardens:

The grounds included a woodland carpeted with wild flowers, a pond bordered with iris and azaleas, the sunken orchard was planted with a carpet of violets, a bridle path, a pond made in the woodland, and a dogwood allee surrounding the outdoor tennis court. In spring, a brilliant display of Darwin tulips, edged with tiarella, creeping white and lavender phlox, viola, candytuft, and forget-me-nots filled the beds. In early summer views of the perennial beds along the path show delphiniums, phlox, Japanese iris, and Oriental poppies are blooming.

The Ingalls' remained at Sunken Orchard for six years. In 1922, they sold up to Charles McCann and his wife "Lena" Woolworth. Three years later, the McCanns would add another Long Island gem to their portfolio, Winfield Hall, the spectacular - if slightly eerie/possibly haunted - home built by Helena's eccentric father, Frank Woolworth.

While their second purchase had kept Winfield Hall in the family, Charles and Lena McCann preferred their home at Oyster Bay. They spent $3.5 million on the initial purchase plus improvements that included expanding the estate until it encompassed 192-acres. In 1927, they employed architect James W. O'Connor to make some minor alterations to the main house while adding "The Playhouse" in the gardens.

"The Playhouse" was a separate outbuilding that consisted of a skylit indoor clay tennis court with adjoining bathrooms and changing rooms. Next to it was the Tudor-style 33-x-70 foot music room/ballroom with obligatory pipe organ, minstrel's gallery, and Elizabethan stained glass windows beneath a high-arched timber frame ceiling. In addition to a caretaker's apartment, kitchens, and a wine cellar, it also enjoyed its own bar in the style of an English Tudor pub (known as "The Tap Room") with a comfortable lounge, carved panelled walls, and a large, open fireplace.

Many of the music room's features have since been removed to Post University and the room itself is now open to the public in its new role as the St. Pius V Chapel. It had its own terrace surrounded by French gardens that led down to the outside tennis court and a 25-x-60 foot swimming pool overlooked by a summer house. These French gardens consisted of 12 interconnecting ones that were laid out in 1932 by Annette Hoyt Flanders who received the Gold Medal of the Architectural League of New York for her work.
The McCanns devoted much of their time to charitable causes. In stark comparison to her Woolworth relations, Lena McCann's life was calm and composed. She was an enthusiastic gardener and her interest in European art led to her building a highly-regarded collection of antique porcelain. In 1934, the youngest of their three children, Helena Woolworth McCann (1913-1965), was married at Sunken Orchard in a prominent society wedding to Winston Frederick Churchill Guest (1906-1982). The following year, the McCanns purchased Beauport, an historic house in New England. At around this time, they subdivided the 192-acre estate, maintaining 46-acres around the main house but carving up much of the remaining land into 3-acre parcels for development.

As the McCanns started to spend more time at Beauport, from 1935 it was not always entirely clear who was occupying Sunken Orchard. It remained in the hands of the McCann family and certainly their children benefitted from the subdivision of the land as each of them were given substantial houses on the estate as wedding presents, eg., Beau Pré. Although members of the family - including their grandson, Winston Alexander Guest - continued to live in the area until the 1980s, at some stage, the McCanns started to lease out Sunken Orchard and in about 1950 William Woodward, Jr. (1920-1955) was resident there before purchasing it outright.

Billy Woodward was a tall, dashing, Harvard-graduate and heir to a banking fortune. He was a well-known horse-breeder (among others he owned the celebrated thoroughbred Nashua), polo player, and, owner of the famous stables at the Belair Mansion in Maryland. He shocked his blue-blood family in 1943 when he married Ann Eden Crowell (1915-1975), a former actress from rural Kansas who re-invented herself on coming to New York.

Ann was voted "The Most Beautiful Girl in Radio" in 1940 and entered into the world of the Woodward family while working as a showgirl at "FeFe's Monte Carlo," a nightclub in New York City. It was there that she met William Woodward Senior, and was rumored to have been his mistress before she started dating his only son and heir, Billy.

After acquiring Sunken Orchard, Billy and Ann Woodward divided "The Playhouse" into two separate buildings and for tax reasons leased the music room to the Cinerama Corporation for $1,500 a month where they recorded soundtracks for movies including Around the World in 80 Days (1956). Billy and Ann's relationship was toxic, they seemed to wind one another up, and rumor had it that Billy had asked for a divorce in 1947, but Ann refused to relinquish the position in society that their marriage afforded her.

On the night before Halloween in 1955, Billy and Ann attended a dinner party locally given by Edith Kane Baker for the Duke and Duchess of Windsor. On returning home the Woodward's went to their separate rooms, both more on edge than usual due to the rumors that there was a prowler doing the rounds in the neighborhood. With overtones of the Oscar Pistorius case, Ann claimed that she was woken by a noise and saw a figure go past her window by the indoor tennis court. Terrified, she grabbed at the gun by her bed and shot at the shadow twice, unwittingly killing her husband.

The following morning, the Duchess of Windsor organized an impromptu lunch party for all those who had attended the dinner the night before. Once gathered, she informed everyone that they would all be closely questioned before politely but firmly ordering them to hold rank and if asked were to say that, "Bill and Ann Woodward were an ideally-suited couple". Irrespective of justice, for the Windsors what mattered more than anything was that their lives could carry on unhindered without prying eyes judging their lifestyle or the characters of the people they called their friends.

Though acquitted by a jury, Ann's detractors (and there were many, mainly due to her less than blue blood) were happy to let the rumor mills roll to the tune that she had murdered him and she was dropped like a hot rock from the society she was so eager to be part of. Emphasizing on the strained relationship between Ann and Billy's particularly steely mother, Elsie Ogden Cryder (1882-1981), Dominick Dunne published The Two Mrs Grenvilles (1986) - also made into a movie. But when Truman Capote revealed his intentions to write a thinly-disguised and particularly caustic version of the events that framed Ann - Answered Prayers (1987) - she took her own life after reading an excerpt in Esquire. To round out the tragedy, both Billy and Ann's sons killed themselves too.

After Woodward's death, Ann left New York for Europe. Sunken Orchard was sold in 1957 to the Oyster Bay Town Golf Club and the west wing of the house was subsequently knocked down. In about 1983, it was sold to the newly-formed Catholic Society of St. Pius V, but today it is once again a private residence.

This Crazy Thing Called Love: The Golden World and Fatal Marriage of Ann and Billy Woodward By Susan Braudy

The Two Mrs Grenvilles: A Novel By Dominick Dunne

The Big Oyster: History on the Half Shell By Mark Kurlansky

Making a Landscape of Continuity: The Practice of Innocenti & Webel By Gary R. Hilderbrand

Winfield: Living in the Shadow of the Woolworths By Monica Randall

Jennifer Bartlett & Pierre Bonnard: In and Out of the Garden By Klaus Ottmann