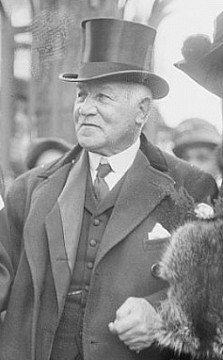 He was born in Ireland at Balliva House, County Cork. The Crokers were an old Protestant landed family but his father wasted every advantage handed to him and by 1846 was forced to start afresh in New York. By age thirteen, Richard had quit school and was working as a machinist but quickly gained a reputation as a street fighter and became the leader of the Fourth Avenue Tunnel Gang, living in the niches of the train tunnels leading out of Grand Central Station. By nineteen (1862), he'd made a name for himself in the boxing ring and he sought to improve himself by joining Boss Tweed's Fire Department where his aptitude for winning multiple votes for Tammany Hall candidates and breaking the bones of those who didn't saw his star rise. By 1868, he was elected an Alderman and two years later he was appointed superintendent of markets, rents, and fees - fertile ground for lining his pocket through bribes and extortion.

He was elected Coroner in 1873 and became the protégé of "Honest John" Kelly. The following year, he was charged with the murder of their political rival John McKenna but the jury acquitted him and after Kelly died in 1884 Croker became the boss of Tammany Hall and its finance committee, ruling over 90,000 party workers with "an iron fist".

Although officially Croker occupied an unpaid position, he became a multi-millionaire through bribery, extortion, paybacks, and insider deals. He ensured he was paid handsomely to turn a blind eye towards the thriving brothels, opium dens, and gambling houses. Businesses wishing to win civic contracts made Croker a partner and either sold him stock at deflated prices or bought surety bonds from the insurance companies with which he was affiliated. He made huge profits from insider trading on Wall Street and from real estate deals before development details were made public, notably via Andrew Freedman (owner of the New York Giants), his best man at his second wedding in 1914.

In 1890, he moved from his modest home in Harlem into a mansion off Fifth Avenue at 5 East 74th Street. He bought it for $80,000 and paid a further $200,000 to redecorate and furnish it. In addition, he kept a private Pullman railroad car to convey him between New York and his summer home on Florida's Palm Beach, "Wigwam". In 1893, two years after paying $500,000 for a stock farm at Richfield Springs near Utica, he paid a further $250,000 for a half-share in Tennessee's highly successful Belle Mead stud farm.

In 1894, a police investigation into corruption at Tammany Hall saw them lose at the polls and the Committee of Seventy - with such heavy-weight names as Henry Clews, Anson Phelps Stokes, J.P. Morgan, Cornelius Vanderbilt II etc. - was brought together with the one aim of putting an end once and for all to Tammany's political stranglehold. In the face of such formidable opposition, Croker was wise enough to know when to throw in his chips. He quit New York for rural England where he lived between London and Antwicks Manor near Wantage. Barred by the Jockey Club from establishing a racing stables at Newmarket he purchased Glencairn House in his native Ireland. He lived between Glencairn and Palm Beach for the remainder of his life and in 1907 he made the headlines again when his horse Orby became the first Irish horse to win the famous Epsom Derby.

During his reign as "Master of the City" Croker amassed a fortune estimated to be between $5-10 million. His first wife (for whom he converted to Catholicism to marry) was Elizabeth Frazer (aunt of Charles McCann who married Helena Woolworth) and the mother of his seven children, but they became estranged when he left New York. When he was married again in 1914 he granted her power of attorney over his property and fortune which prompted all but one of his surviving children to launch a very bitter and public legal battle against them. He died at Glencairn in 1923 but his will was not settled until 1943 by which time Bula had had to sell his property and been declared bankrupt.