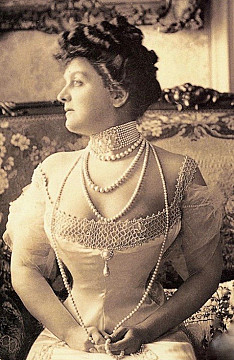 She was born in Brooklyn, New York, and was educated in England before returning to the States. She turned to acting as a way of supporting her mother who had been left penniless when Edith's father died young. She started on the stage in Brooklyn in 1882 before being noticed and taken on the road in several leading roles with a company from Boston. In 1884, she came to the attention of Augustin Daly, "one of the most influential men in American theatre," and her career took off, principally in Boston but also touring Europe. That November, while performing in New York as Mrs Marjorie Gwynne in "Love in Crutches," she made a young Mr Gould weak at the knees: aside from her talent treading the boards, she was also viewed as one of the great beauties of her day.

In July, 1886, news reached New York from Paris that she was engaged to railroad heir George Jay Gould. Many hopeful would-be fathers-in-law and put-out debutantes refused to believe it, but two months later (September 14th), they were married in the Drawing Room at Lyndhurst. It was, "a quiet ceremony" with all the Gould family in attendance, but being an only child and without a father, Edith's mother was the only member of her family there. It was reported that, "the gossips who have conjured up bogies in the matrimonial path of George Gould would have been deeply pained to see the pleasure there so universal and so manifest". She was said to have won the affections of the Goulds when George had presented her to his family over a year before: "The refined ways, the clever sallies, the lovable disposition of the young woman won admiration and regard".

They initially lived at 1 East 57th Street connected by a passageway to her in-laws mansion on Fifth Avenue. In 1892, the Goulds built a typically Victorian, 50-room mansion ten blocks further north on Fifth Avenue. But, after just 15-years they scratched it entirely in favor of a spacious modern, Beaux-Arts home, 857 Fifth Avenue, that they put up in its place. These were good times for Edith: in 1903, George lavished her with pearls valued at $500,000 from Tiffany's and in 1908 he presented her with their new mansion as a place from which she could entertain equal to any other society hostess.

Over the years, Edith's once admired buxom figure relaxed with age and as she began to spend more time at their country home, Georgian Court, her husband's eye began to rove. In a bid to win back his attentions, aside from taking up golf, she took to wearing a prescribed, tight rubber suit under her clothes to constrict the unwanted bulges. On November 14th, playing off the 5th tee with George (by then the father of two children by his younger mistress) on their 9-hole golf course at Georgian Court, she dropped dead of a heart attack. The job of the two physicians called to the estate to determine the cause of death was made that much easier when the excruciating undergarment was revealed.

Having quit the stage to marry George, she didn't altogether abandon her natural calling and on at least two occasions starred in private performances - notably in "Twilight of the Gods" in 1899, a play put on in the carriage house at Georgian Court, written and directed by none other than Edith Wharton. During World War One, Mrs Gould was Chairman of the Entertainment Committee of the New York City Mayor's Committee of Women on National Defense. In that capacity, she directed entertainments given at the Brooklyn Navy Yard and at various hospitals across the city. Her city mansion became the committee's de facto warehouse, storing, “theatrical properties, wigs, grease paints, costumes, etc.".

Despite the fact that she knew her husband kept a mistress housed with the two children born from their affair, she was not bitter which was reflected in her will: to "my beloved husband," she gave their mansion on Fifth Avenue and all therein, plus another property that was in her name: 177 East 64th Street. These properties were then thought to be worth somewhere between $2-3 million. However, not unreasonably, she did stipulate that should he remarry, these would pass to their children - just six months later, they did.