Built in 1907, for Mrs Edith (Kingdon) Gould (1864-1921), as a gift from her husband, George Jay Gould (1864-1923). Standing on a footprint of 114-by-45-feet, it was situated on the north east corner of Fifth Avenue and 67th Street. Their five-story limestone mansion with two basements floors cost them $1.25 million and was designed by one of the masters of Beaux-Arts architecture, Horace Trumbauer. It replaced their by-then outdated 50-room, turreted Victorian mansion built on the same plot just 15-years earlier, and it was boasted that not one brick from the old structure was re-used in the new. After George died in 1923, it was bought by Harry Payne Whitney on behalf of his mother-in-law, Mrs Alice Vanderbilt. She downsized here in December, 1925, having lived for the previous thirty years at the Vanderbilt Chateau ten blocks further south....
zoom_in 16 images 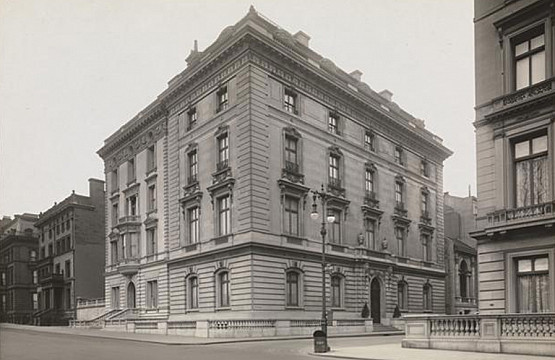 George J. Gould was the eldest son of Jay Gould, one of the most infamous "Robber Barons" of the railroad era who died with a fortune of $84 million - and a reputation as one of the most despised men in America. George shunned college to work directly under him and aside from receiving an ample fortune, from 1892 he not only took over his father's railroads, but he also became the head of the family: he was kept a busy man on both fronts. In 1886, at a quiet wedding held at Lyndhurst, George married Edith, a talented stage actress and one of the great beauties of her time. She quit the stage for her new role in society and this mansion replaced the one they'd built earlier in 1892.

The Gould's new home was entered via a large bronze door on 67th Street that opened onto a 35-foot high, marble stair hall ornamented with bronze light fittings. The hall concealed a lady's powdering room, a cloakroom, and a small pantry. However, the house was designed on the anti-Victorian principal that it was better to have fewer, larger rooms rather than many, smaller rooms. Therefore, the 5,130-square foot ground floor contained just two, very large receptions rooms separated by 50-feet of hallway: the Dining Room punctuated with statues and finished in swirling Cipollino marble; and, the library.

The next (third) floor contained the Gould's bedroom-suite (with Adam-style boudoir) plus four guest rooms, each with their own dressing room and bathroom. All the bathrooms were floored and lined in marble; the baths and basins were all carved from solid marble; and, the fittings were all plated in gold. The next (fourth) floor up was for the children: there were 7-bedrooms, a private dining room, and a pantry. The fifth (attic) floor was for the staff with 10-servants rooms that included the housekeeper's room, linen room, sewing room, and clothes pressing room. In addition to the staircase, there were two elevators, and in 1911 Trumbauer added a roof garden with a sun room.

Aside from the servant's dining room, male staff bedrooms, a vast wine cellar, trunk and store rooms, the two-story basement contained every modern contrivance then imaginable: built-in refrigerators; an ice plant; a central vacuum system; a central ash depositary connected to every fireplace; electric irons; hot air-blown clothes dryers; and, a 13-foot high by 5-foot wide safe encased in silver which made it entirely fireproof.

The Curse of the Pharaohs?

Edith's weakness was for candy, which did not help curtail her husband's weakness for showgirls. By 1921, George had fathered two children outside of wedlock with his by then long-standing mistress, Guinevere - a chorus girl twenty years his junior. But, Edith wasn't going to give up that easily: she embarked upon a weight loss regime that involved golf, steam baths, massages, and less pleasantly: a tight rubber undergarment to hold in any unwanted bulges. Having been in retreat at their winter home, Georgian Court, in January she launched herself back into society hosting a dance on Fifth Avenue for more than 600-guests. Ten months later, she was dead, having collapsed on the 5th tee at Georgian Court while playing golf with George - her rubber suit under her clothes.

Six months later, to the horror and anger of Edith's many friends, George had married Guinevere and to avoid the inevitable remonstrations wasted no time in hot-footing it to Europe. Following a visit to King Tutankhamun's newly discovered tomb in Egypt, George fell ill and having been married to Guinevere for barely a year, succumbed in France.

Despite the size and grandeur of the Gould Mansion, for Mrs Alice Vanderbilt, this really was downsizing being just half the size of the houses in which she'd lived for the previous thirty years. She'd placed the colossal Vanderbilt Chateau on the market in 1923. It took two years to sell at which point she was able to repay her son-in-law (Harry Whitney) the $800,000 he'd paid on her behalf and she was in her new home for Christmas, 1925.

Alice died in 1934 when this mansion and The Breakers - the iconic home of the Vanderbilt's in Newport - were inherited by her youngest daughter, Gladys, Countess Szechenyi. By 1951, she barely made use of her Fifth Avenue home and sold it for $400,000 to the Institute of International Education. The institute made an educated decision 11-years later (1962) and sold it to developers for a tidy profit who replaced it and the Thomas Fortune Ryan House next door with a pair of unremarkable 19-story blocks.

In the Valley of the Kings: Howard Carter and the Mystery of King Tutankhamun's Tomb By Daniel Meyerson

Fifth Avenue, 1911, from Start to Finish in Historic Block-by-Block Photographs By Christopher Gray