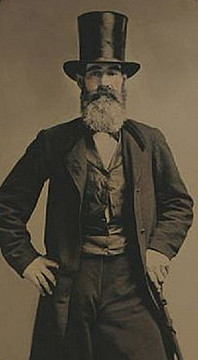 He was born at Chester, New Hampshire - the paternal grandson of the Attorney-General of New Hampshire and the maternal grandson of the Chief Justice of New Hampshire. He grew up in Washington D.C. and the diaries that he kept during boyhood give a unique insight into life among the capital's political elite and are kept with his other papers in the Library of Congress. He was educated at Phillip's Exeter Academy and graduated from Harvard College (1857) where he was secretary of the Hasty Pudding Club and class poet. He had seriously considered following a literary career and became a pupil of James Russell Lowell but changed his mind and took the degree of LL.B. at Harvard in 1859. He was librarian of the Harvard Law School before finishing his legal education in the offices of Thomas Nelson after which he was admitted to the Bar (1860).

During the Civil War, he was appointed Deputy Naval Officer at the Port of Boston (1862) and Deputy Collector in 1863. In that same year he started working for the banker Samuel A. Way at Boston which later became known as Foote & French. He stayed in Boston until 1870 when he accepted a position with Jay Cooke & Company at New York, funding U.S. government loans. When Jay Cooke went under, he continued to represent the London house which continued under the name of McCulloch, Melville, Evans & Co. In 1874, he was one of the group that acquired control of the National Bank of the City of New York. He retired in 1880 and spent several years abroad but returned to New York and in 1888 became President of the Manhattan Trust Company, a position which he held until his death in 1893. He was a Member of the State and City Bar Associations; the Union League; the Colonial Club; and, the New England Society. He was a Charter Member and Vice-President of the Century Club and President of the Harvard Club of New York.

He lived between New York City and his country homes in Tuxedo Park and Harborview at Newport, Rhode Island. In 1861, he was married to Ellen, daughter of Amos Tuck, Founder of the Republican Party, and sister of Edward Tuck, "the Dean of the American Colony in Paris". They had three socially prominent children. In 1906, his widow paid $80,000 for the Villa Saint-Priest at Cannes in France, living between there and Harborview while often staying with her daughter Lady Cheylesmore in England.