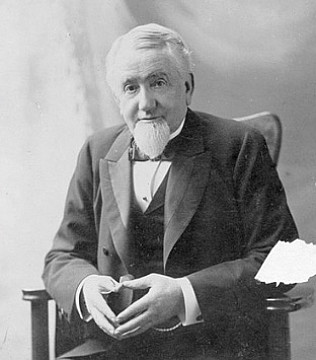 He was born in Brocton, New York, and dropped out of school to help his father's business which moved entire buildings out of the way to help construct the Erie Canal at Albion. His father died in 1853 and Pullman continued the business, making headlines in Chicago when he moved a six-story hotel - with all the guests still inside! In 1859, he purchased the patent for a sleeping car from Edward Collings Knight and by 1864, influenced by the packet ships he'd watched on the canals at Albion, he designed the Pullman "Palace Car". It not only grabbed the headlines in 1865, but it was seen by hundreds of thousands of mourners when it was commissioned to take Abraham Lincoln's corpse from Washington back to Springfield. By 1867, he founded the Pullman Palace Sleeping Car Company and introduced the first "hotel on wheels" with food and service as good as in any top restaurant. He grabbed headlines yet again by employing former slaves as "Pullman Porters" which became a very respected and sought-after job.

By 1875, Pullman's owned 700-carriages and hundreds of patents, notably for the vestibule trains that allowed passengers to pass from one carriage to the next without being exposed to the elements. During this period, he also fought off the undisputed king of the railroads, Billy Vanderbilt, who attempted to sink his business in favor of the luxury car company owned by his son-in-law, Seward Webb - which Pullman ended up taking over.

In 1880, he developed 4,000-acres south of Chicago on which to build his new plant, around which he created the Pullman Company Town, again attracting nationwide attention. But, in his effort to keep the town morally pure, he ruled over it like the worst kind of despotic king. By 1893, Pullman had 2,000-cars on the railroads and the company was worth $62 million. But, when business slowed the following year, he cut jobs and reduced wages by 30% while increasing working hours, all of which resulted in the famous Pullman Strike. President Grover Cleveland ordered in the army to quell the riots, but still Pullman refused to negotiate terms with the union, and locking up his home and business he left town and removed all his cars from the railroads. The ensuing unrest led to 34-deaths and although the courts sided with the railway owners, Pullman's reputation never recovered. His health failed and he died of a heart attack in 1897.

Pullman lived with his family between the Pullman Mansion in Chicago; Castle Rest, on Pullman Island in the Thousand Islands; and, Fairlawn at Elberon, New Jersey. In the year after his death, the Supreme Court ruled the Pullman Town "un-American" and forced its annexation with Chicago. Pullman left the bulk of his $17 million fortune to his wife, all but cutting off his troublesome twin sons with just $3,000 a year while each of his daughters received a million. When his wife died in 1921 she left the bulk of her $12 million to charity. Their daughter, Harriet, built Carolands in California with the very George Pullman-orientated dream of creating, "the wonder and admiration of America".

Rising from the Rails: Pullman Porters and the Making of the Black Middle Class By Larry Tye

The Edge of Anarchy: The Railroad Barons, the Gilded Age, and the Greatest Labor Uprising in America By Jack Kelly