Completed in 1876, for George M. Pullman (1831-1897) and his wife Harriet Sanger (1842-1921). Following the Great Fire of Chicago (1871), Pullman, along with fellow millionaires Marshall Field and Philip Danforth Armour, led the migration south to Prairie Avenue which would become the new enclave of the city's elite until Potter Palmer opened up the North Side Gold Coast some ten years later. Standing on the northeast corner of Prairie & Eighteenth Street, Pullman's mansion was as luxurious as the "Sleeping Palaces" that made his fortune, and having spent an estimated $350,000 to $500,000 building it, it was generally acknowledged to be, "the grandest" in all Chicago....
zoom_in 16 images 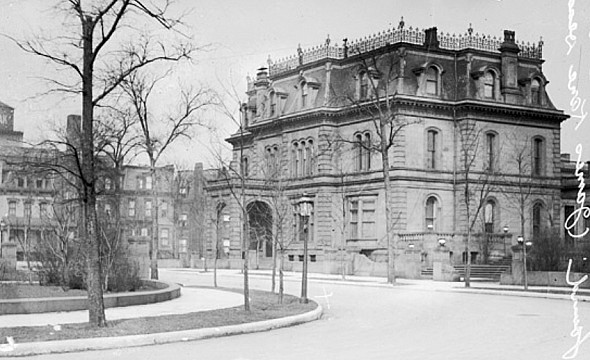 George M. Pullman's early career was filled with glowing headlines that heaped wonder and praise on his seemingly endless list of innovations that for the first time ever made overnight travel by train as luxurious as a stay in any top hotel. But, when the town he built rebelled against its despotic ruler resulting in the Pullman Strike in 1894, he was left with blood on his hands and died three years later with his reputation in shreds. Nonetheless, after the Great Fire, it was men like him who invested their wealth back into the city in which they'd made it to see it rise quite literally like a phoenix from the ashes.

In 1873, having reputedly paid the highest price ever recorded for a residential lot in Chicago, Pullman brought together four men all under the age of forty to build what he intended to be a showpiece home. It was designed by architect Henry S. Jaffray; built by John Mathew Dunphy; its famously sumptuous interiors were the work of Solon S. Beman; and, its gardens were landscaped by Nathan Franklin Barrett.

Jaffray and Beman were then all but unknown in Chicago, but both men had spent the previous decade learning their trades from the best in New York: Jaffray cut his teeth in the offices of the Vanderbilt family's architect of choice, Richard Morris Hunt, while Pullman invited Solon S. Beman to Chicago who up until 1877 had been in the employ of Richard Upjohn, the first President of the American Institute of Architects. Barrett went on to work with the leading architectural names in Gilded Age America and he contributed to some of the country's most famous estates, eg., Lynnewood Hall and Woodlea.

The Luxurious Home of the Man who Made Travel Luxurious

Pullman was a master of self-publicity and the 3-story mansion that was created here was nothing short of a magnificent example of Second Empire architecture. Surrounded on three sides by a lawn that occupied an entire square, the mansion was centered by a massive porte-cochere on 18th Street. It measured 70-by-108 feet for a footprint of 7,650-square feet which combined for 22,680-square feet of living space. No expense was spared: it was built with what was then America's most highly-prized building material, Connecticut Brownstone - the same used for the Vanderbilt Triple Palace in New York - and its interiors were made up of equally costly woods, perhaps most conspicuously displayed within the rich and ornately carved and pillared mahogany hallway.

The reception rooms here included a 200-seat theatre, a billiard room, conservatory, library, and a bowling alley, but it was the ivory and gold Drawing Room with its six vast mirrors that led The Tribune to opine that, “in point of location, size, and architecture, it surpasses any room of its kind in Chicago, whether public or private”. Nor did its cavernous rooms go unused as the Pullmans went out of their way to ensure that their soirées were, "the most lavish of all" in Gilded Age Chicago. It was said that the house was, "forever ablaze with party lights" and after one such evening a member of the press gushed that, "the gardens of Cashmere were not more beautiful than the superb apartments of the Pullman residence, caught, as it seemed, in a shower of roses”.

Solon Beman became Pullman's preferred architect and would build the model settlement at Pullman Town before returning to Prairie Avenue in 1890 to add a new extension to the mansion. By 1894, Pullman's point-blank refusal to negotiate with the railway unions and the ensuing civil unrest that followed cost him not only his reputation, but his life. In 1897, he suffered a huge heart attack and died. One of the last happy events to be held at his mansion prior to the Pullman Strike debacle was in 1892 when his daughter, Harriett (builder of Carolands), married Francis Carolan in the Drawing Room.

After Pullman died, his widow lived here for part of every year up until her death in 1921. That November, a three-day auction was held dispersing the art and antiques that had gone unclaimed by her two surviving children and in 1922 the house that had once been the pride of Chicago was reduced to a pile of rubble. Since the ascendence of the North Side Gold Coast from the 1880s onwards, Prairie Avenue gradually lost its appeal and the lot stood unoccupied for a further two decades. In 1941, a drab bus depot was built in its place but Prairie Avenue has since seen a return to gentility and from 2000 the lot has been redeveloped with upmarket houses and a condo tower.

Chicago's Great Fire: The Destruction and Resurrection of an Iconic American City By Carl Smith

The Devil in the White City: Murder, Magic, and Madness at the Fair That Changed America By Erik Larson

Inside The Beauty of Chicago's Mansions By Roger Prioleau