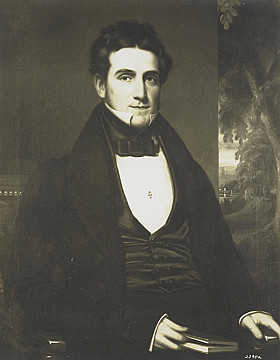 He was born into a Baptist family at "the old red house" built by his grandfather, "Squire Opdycke" in Hunterdon County, New Jersey. For two years, he was a schoolmaster before working as a clerk in a local store. Having saved $500, he travelled to Cleveland where he opened a dry goods business before continuing south to New Orleans in 1827. There, he started a successful clothing store and pioneered the idea of making cheap, ready-made clothing to buy off the hook. The outbreak of Yellow Fever in 1832 saw him return to New York where he built, "the city’s first important clothing factory". He imported wool from Europe (mainly Germany and Switzerland); made it into cheap clothing in New York; and, then sold the finished product to plantations in the south for their slaves. Ironically, he was a staunch and vociferous opponent of slavery which led him to enter politics. In 1851, on publishing his Treatise on Political Economy that favored the opinions and received the approval of the great English philosopher John Stuart Mill, he denounced slavery as, "a gross violation of natural laws".

Opdyke's opposition to slavery led him into politics and he became associated with the Free Soil Party from 1848 that later merged with the Republican Party. He unsuccessfully ran for Congress but was later elected to the New York State Assembly. In 1860, he attended the Republican National Convention and threw his weight behind Lincoln and the war effort, pledging $20,000 towards his campaign. In 1861, he was elected the 76th Mayor of New York City. His pro-war stance drummed up fervor and support for the Union Army but ultimately backfired with the Draft Riots in 1863. While it was true that he made a second fortune putting clothes on the back of the Union Army, unlike others who made similar fortunes, his support of the war seemed to stem from a genuine wish to see slavery abolished even at the expense of the business that made his first fortune.

He was replaced as Mayor, but in 1864 he was elected the first President of the Fourth National Bank of New York; from 1867 to 1875, he was President of the New York Chamber of Commerce; and, in 1868, he co-founded the bank George Opdyke & Company with his sons to provide financing for railroads. His fortune was severely affected by the financial panics in the 1870s, but nonetheless he died leaving an estate of $1.2 million. In 1869, he built a brownstone mansion at 579 Fifth Avenue - afterwards purchased by Jay Gould - and he summered in Saratoga Springs. In 1829, he married Elizabeth Stryker of New Jersey. They had seven children and were survived by four sons (William, Charles, George & Henry) and two daughters, (Mrs Edward C. Strobell and Mrs George W. Farlee).

The Lions of Fifth Avenue By Fiona Davis