Completed in 1869, for George Opdyke (1805-1880), then President of the New York Chamber of Commerce, and his wife Elizabeth Hall Stryker (1805-1891). Their four-story brownstone on the northeast corner of Fifth Avenue and 47th Street was designed by Stephen Decatur Hatch (1839-1894) whose next project was the Gilsey House Hotel, a NYC Landmark still standing at 1200 Broadway. Opdyke was barely in the ground in 1880 before his neighbor, the notorious robber baron Jay Gould, paid $250,000 for the mansion, having splashed out the same amount in the same year for Lyndhurst, his magnificent country estate - "home was worth more to him than his enormous wealth". In 1892, he willed his townhouse to his extremely philanthropic daughter, Helen, who apart from a few changes kept it exactly as it was while she grew up there. Outlasting the Goulet House by over a decade, it evaded development until 1953....
zoom_in 9 images 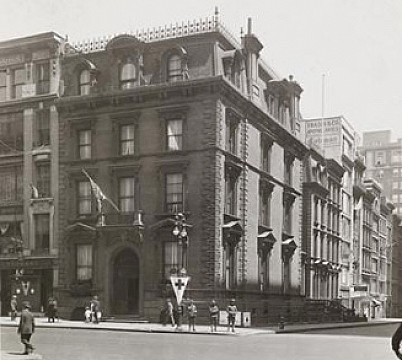 George Opdyke grew up in New Jersey before establishing himself in New Orleans where he pioneered the idea of making cheap, ready-made clothing to buy off the hook. By 1832, he was in New York and built "the city’s first important clothing factory". Ironically, his products were popular with slaveowners but he himself denounced slavery as, "a gross violation of natural laws" and put his full weight behind Lincoln to see slavery abolished. To that end he was voted the 76th Mayor of New York City but his pro-war stance caused the Draft Riots in 1863 that scarred his tenure. In later years, he financed the building of railroads and his fortune took a hit during the 1870s, but he still died a millionaire.

Construction started on his new mansion in 1868, designed by up-and-coming architect Stephen Decatur Hatch. It was described in 1892 as, "a square brownstone house, about double the width of the average house, with an extension in the rear... The main entrance is in the middle of the Fifth Avenue front, under a portico into a deep vestibule with handsomely-carved oaken doors and mosaic floor. The hall is 50-feet long. On the left of the hall is a small reception-room, with one window facing Fifth Avenue. On the other side of the hall are the great drawing-rooms. The library and the dining room are in the rear... everywhere (it is) a model of comfort, unostentatious elegance, and good taste".

Opdyke died in June, 1880. By that Christmas, his heirs had sold the mansion for a massive $250,000 to the notorious robber baron and railroad president, Jay Gould, who had been their neighbor across the street at 578 Fifth Avenue since 1870. Gould hired the Herter Brothers to refurbish the house and moved in with his family in 1882.

It was said of Gould that, "home was worth more to him than his enormous wealth". Despite his appalling business reputation, he was a devoted family man, well-read, and a lover of art and horticulture. The walls of his townhouse were lined with silk and velvet and groaned with French Romantic, Realist and Impressionist artwork by the likes of Eugène Delacroix, Jean-François Millet, Henri Rousseau, Charles-François Daubigny, William-Adolphe Bouguereau, Rosa Bonheur etc. Similarly, the conservatory brimmed with a profusion of exotic flowers - particularly Jay's favorites, orchids - supplied from what was then the largest greenhouse complex in America at Lyndhurst.

"The Best-Beloved Woman in the Country"

Despite having had the reputation of being the most hated man in the country when death finally took Gould in 1892, a throng of some 2,000 (mostly) well-wishers gathered outside the mansion to (mostly) pay their respects: of these only 150 gained entrance. Having outlived his wife, Gould left both his homes to his eldest daughter, Helen, who was as philanthropic as he had been despotic. She converted the second floor of the mansion into a sparse office from where she dispensed her charity with the help of three secretaries and Margaret Terry (1820-1898), who'd joined the Gould household as a housekeeper in 1877.

In contrast to her siblings, Helen cared little for society and had no desire to upsize nor spruce up her childhood home. She maintained it as it always been for nearly 20-years until 1910 when she employed Carrère & Hastings to modernize the exterior. The changes included removing the 40-year old lamp-posts that had stood either side of the main entrance - a leftover from Opdyke when Mayor's houses were distinguished that way.

Helen remained a spinster until the age of 45 when - to the suprise of everyone, possibly even herself - she became smitten with Finley Johnson Shepard, a railroad executive and son of a parson, and they were married in 1913. The Shepards made only one change to both their townhouse and country house which enabled the parson's son to enjoy his favorite pastime at both his new homes: Aeolian Organs were installed at both No. 579 and Lyndhurst. The former was the larger of the two and was installed at a cost of $21,750.

Helen died in 1938 at Kirkside, her summer home in the Catskills. By then, her husband was almost blind and he retired to Lyndhurst where he still enjoyed playing the organ and lived for the remainder of his life with his widowed sister-in-law, Anna, Duchesse de Sagan, recently returned from France. In the meantime, No. 579 surpassed the Goelet House to become the last Gilded Age mansion of its era left standing on Fifth Avenue, but it sat empty and lifeless. Its last hurrah was the auction that took place there after Mr Shepard's death in 1942 and its magnificent collection of art, porcelain, tapestries and glassware was dispersed to a new generation. Yet it still managed to evade the wrecking ball until 1953, when it was replaced by the 16-story block that stands in its place today.

A Most Wicked Conspiracy: The Last Great Swindle of the Gilded Age By Paul Starobin

Seeking New York: The Stories Behind the Historic Architecture of Manhattan--One Building at a Time By Tom Miller

Time After Time: A Novel By Lisa Grunwald