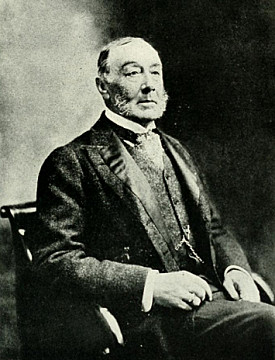 He was born at Mount Hope, Hyde Park. He was a nephew of William Henry Aspinwall (1807-1875) of Rockwood Hall. He was educated at Union College in Schenectady after which he took two years to travel through Europe and the Holy Land, during which time he fought for freedom with Garibaldi's Legion in Italy. Returning to America, he entered Harvard University. He graduated in law, aligned himself as a "Bourbon Democrat" and made his career managing important corporations. He was a founding director of the Consolidated Coal Company of Maryland; President of the Southern Railway Security Company; and, Vice-President of the Delaware & Hudson Railway. During an 1853 visit to England, he served as Secretary to the U.S. Minister to the United Kingdom, James Buchanan. In 1847, he inherited Mount Hope from his grandfather. When it burned down in 1866 he purchased Springwood in Hyde Park.

He spent as much time as he could at Springwood where he was known as "Squire James" and bred "Gloster" the first trotter to do the mile in less than 2.20. However, he sold his stable in the 1870s when trotting was no longer considered a, "gentleman's sport". He was a vestryman and warden of St. James Church for 40-years; he managed the Hudson River State Hospital; and, was a Member of the Board of State Charities. He smoked cheroots and travelled to Europe at least once a year to stay with friends in England and France. He particularly enjoyed hunting in Pau and the spa resorts of Germany. He was married twice: (1) In 1853, he married his second cousin, Rebecca Howland, sister of Meredith Howland. They had one son, "Rosy" Roosevelt (2) In 1880, he married Sara Delano who was 26-years his junior. They also had one son, U.S. President Franklin Delano Roosevelt.

The Wars of the Roosevelts: The Ruthless Rise of America's Greatest Political Family By William J. Mann