Built from 1826, for Ephraim Holbrook (1782-1852) and his wife, Nancy Sanford (1782-1852). In the same year that they moved into Bellefield they built another house on the property: a square, two-story frame house (most likely for the estate manager) which still sits at the core of Springwood today. In 1845, the new owner of Bellefield sold the 76-acres on which the dwelling stood to his son-in-law, Josiah W. Wheeler (1807-1882). To the existing farmhouse, he added wings and remodelled it into an Italianate villa that he named "Brierstone" as a summer home for his family. In 1866, this house plus further acreage was bought by FDR's father, James Roosevelt, for $40,000 after the house that was left to him by his grandfather, Mount Hope, burned down....
zoom_in 7 images 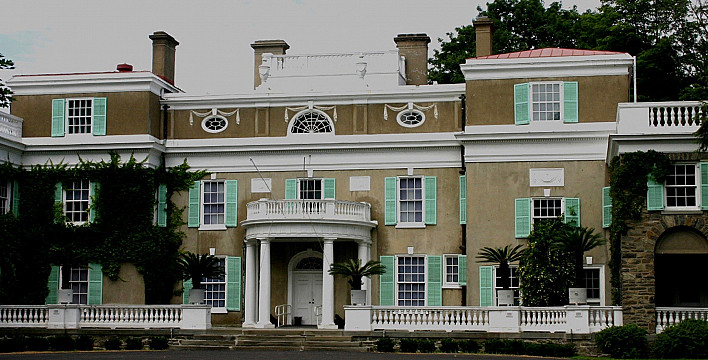 James Roosevelt renamed the estate "Springwood" and since then it has been remodelled and enlarged to its present state. It is best known as the summer home and "Summer White House" of Franklin D. Roosevelt (1882-1945), 32nd President of the United States. In 1943, two years before his death, FDR gifted Springwood to the American people. Since 1945, it has been known as the "Franklin D. Roosevelt National Historic Site" and operated by the National Park Service. Both the house and gardens are open to the public.