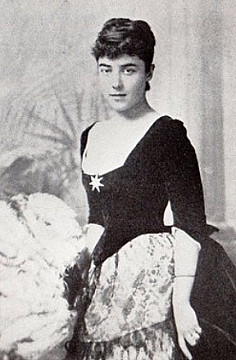 Born at Brooklyn, New York, she was the youngest of the three surviving daughters of the "King of Wall Street" and the maternal aunt of Sir Winston Churchill. She and her sisters are remembered for their absolute loyalty to one another and despite the attention that "the beautiful" Jennie garnered, Leonie was said to be "incapable of jealousy". She met her husband, Jack, after he'd left the army to study Art in Paris. At first, neither family had approved of the match, but it didn't take long before Leonie's in-laws grew to love her as much as everyone else did too:

Of the three sisters, Jennie was known as "the beautiful" one; Clara as "the good" one; and, Leonie as "the witty" one universally adored by all. Leonie's grand-daughter, Anita Leslie, later recalled that, "apart from her music (she played Chopin beautifully) and her joie de vivre, Leonie possessed an extraordinary talent for touching the emotional chords in human beings. She wanted people to like her - not an unusual trait - but she also understood the shy and the hopeful: she was genuinely interested in others, and as she grew older her sympathy and wisdom increased". The Irish playwright, Lennox Robinson (1886-1958), reminisced fondly, "she talked brilliantly herself but with the great gift of making everyone else talk a little bit better than they thought they could".

In about 1895 her husband introduced her to the Duke of Connaught and his wife, Louise. She developed an extremely close attachment to the Duke who fell in love with her (though it was thought not to have been physical at Leonie's behest), while his shy wife also adored her for bringing life to her husband: "Arthur (the Duke) and I never had any fun until we met Leonie". The Duke said he didn't know he could dance until he had danced with Leonie; and, she also taught him not to be cross and how to make others happy even when he was sad. Together, she and her sister Jennie (a great friend of the Duke's brother, King Edward VII) helped to improve relationships between the Royal brothers so that by the time the King died in 1910 the two were reconciled.

In her final days, Leonie was tended for at her bedside around the clock by various nurses. In 1943, she died peacefully in her sleep. Earlier that evening as the nurse had been dozing off she saw an elderly woman approach Leonie's bed, speak softly to her, and then leave. The nurse had of course assumed it was one of the family so there was no need to think anything out of the ordinary had happened. It was only after the funeral as everyone had gathered in the Dining Room that the nurse casually remarked that the lady who had visited her that evening was the same one as in the portrait to the left of the fireplace: the lady in the portrait was Leonie's mother-in-law, Lady Constance, who had died 18 years before. As a testament to their love, Leonie's husband also died within the year.