Her Grace, "May" the Duchess of Roxburghe 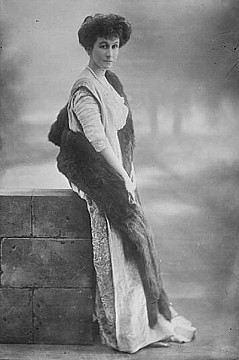 Her family's century-old real estate empire in Manhattan was second only to the Astors and she was considered among the most eligible of America's heiresses. However, she was duped into an unofficial engagement with the disreputable and cash-strapped 9th Duke of Manchester, who used this news solely to stave off his creditors! This was quickly broken off and brushed under the carpet. In 1903, she was married at Ochre Court to the 8th Duke of Roxburghe. Her marriage was distinguished for two reasons: one, it placed her within the highest echelons of the British aristocracy (her son's godparents included King George V and Queen Alexandra no less); but, two, it was a bonafide "love match". She was a close friend of Consuelo Vanderbilt and had been a bridesmaid at her miserable wedding to the Duke of Marlborough, who coincidentally was a cousin of Mary's husband. Consuelo said of Mary - with a hint of bitter envy - that her, "chief interests were needlework, salmon-fishing and bridge. To these diversions she devoted a good brain which might perhaps have been used to better purpose". She inherited some $28 million from her parents and the Goelet art collection, both of which were put to good use at the Roxburghe's ancestral pile, Floors Castle, in Scotland. After ten years of being unable to have children, the Duchess gave birth to a son in 1913.