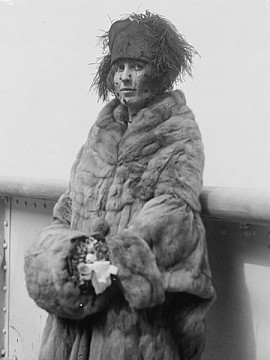 She grew up between 838 Fifth Avenue in Manhattan and her parent's summer house at Newport. Her father was a socially prominent banker but it was her mother who was the source of the most part of their family fortune: Mrs Sophia (Brown) Sherman was a member of the Brown family of Providence (who established Brown University in 1764) and had grown up at the Nightingale-Brown House.

In 1911, Mildred married the 5th Lord Camoys of Stonor Park in England. As can be seen from her photograph, Mildred did not mix well with the cold: Stonor Park was something of a rude awakening to someone who had fainted when trying to unfasten her shoes on honeymoon without the assistance of a lady's maid! But, it wasn't just the cold that shocked her, it was the potential germs that lurked in the ancient four poster beds. In answer to this problem, she ordered all the posts sawn-off the four poster beds and the canopies removed! Stonor was now "hygenic" but the cold was ever-pervasive...

Heating systems may have been common in most of America's comparatively new mansions, but for the ancient houses of England they were a rarity. When the Camoys' rented Stonor to Mildred's childhood friend, Lily Whitehouse and her husband (son of the 9th Earl of Coventry), Lily apparently had an oil boiler from a steamship installed which must have delighted Mildred. Even before then she had refused to stay in other country houses, preferring to be passably warm wrapped-up alone by her own fire rather than freezing in an evening dress at a party! Her dread of the cold even ruled out her being presented to the King and Queen at what she supposed was their draughty palace!

In 1946, Mildred purchased the informal, rambling house she would name Stonor Lodge at Newport. She still had to endure winters in England, but every summer she and her family enjoyed their American vacation. Her husband died at their house in Newport and their younger daughter, the adored Mrs Drexel, lived there up until her death in 2012.