Built from 1793 for the Coggeshalls, one of Newport's oldest families. Once a cottage known as "Mayfield," it was added to over the years until it developed into a rambling, colonial-style mansion. In stark contrast to its grander neighbors along Bellevue Avenue, Stonor Lodge always managed to retain its farmhouse informality and it was here that Jackie Kennedy enjoyed a day's peace before her wedding to JFK. It may not have looked as grand as its neighbors, but Stonor Lodge was built through through a combination of fortunes derived from some of America's most wealthy families: Astor, Brown and Drexel. In 2016, a massive fire made short work of the old mansion. In its place, a new house is being built that will face north onto Hazard Avenue....
zoom_in 5 images 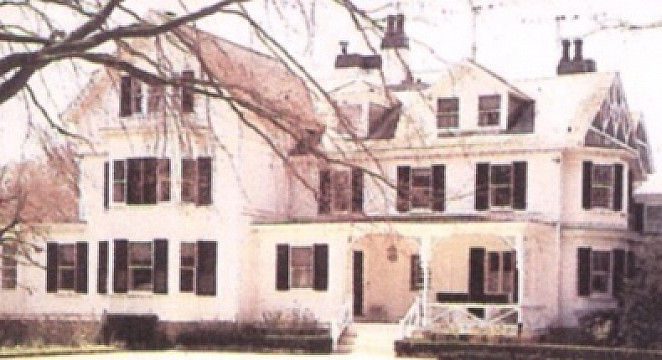 The original farmhouse made up the northern portion of the mansion into which it grew. John Coggeshall (1599-1647) was a founder and the 1st President of the Colony of Rhode Island and Providence Plantations. He was granted 400-acres along what is now Bellevue Avenue and his descendants built "Mayfield" on a farm that made up part of that land.

From 1860, Newport property developer and resident architect, George Champlin Mason Sr. (1820-1894), was designing summer homes that were attracting prominent names from New York for the summer season such as Ogden, Schermerhorn, Warren, and Tiffany. In 1865, at the conclusion of the Civil War, Mayfield was purchased by one Henry Tiffany who was almost certainly a relation of Charles Lewis Tiffany (1812-1902), the entrepreneurial and pioneering founder of Tiffany & Co., Jewellers, of New York.

That year, Henry Tiffany commissioned a local builder (N. Barker) to make some minor alterations to the old house before employing Mason himself in the following year (1866) to carry out a major renovation and extension. Over the course of the next decade, Tiffany sold it to a Mr C. Morgan who in turn sold it to one Charles B. Parkinson.

The Kanes at Mayfield
In 1876, Mayfield was purchased by Walter Langdon Kane (1843-1896) and his wife, Mary Rotch Hunter (1854-1936). He was a great-grandson of John Jacob Astor (1763-1848) and his "charming" wife and her sister were described as "bulwarks of Newport society". Three years earlier, Mrs Kane had survived the sinking of the paddle steamer S.S. Ville du Havre but her other sister and both her parents were among the 226 who drowned that day.

The Kanes hired Dudley Newton (1845-1910), a former pupil of George Champlin Mason Sr., to carry out a major reconstruction of the old house. The changes were such that the Historic Preservation & Heritage Commission lists the construction date of the house at between 1870 and 1880, ie., alluding to its metamorphic re-construction. The exterior was embellished by Newton with a stick-style trim plus further period detailing. The original roofline was also altered, and the entrance hall and further reception rooms were added.

Mrs Kane becomes Mrs Glyn, and the Fire of 1916

Walter Kane died in 1896, but his widow continued on at Mayfield - gaining something of a reputation around town for the speed of her carriage-driving! Four years later, she remarried an Englishman, William E. Glyn (1859-1939), a former professional tennis player and runner-up in the first U.S. National Championship, held at Newport in 1881.

In 1916, a fire ravaged much of the house leaving only a few smoldering rooms standing. One source claims it was the Glyns who restored it while another states that it was rebuilt by Lord and Lady Camoys. Considering that the Camoys bought it as a family house and their daughter only first stepped foot in Newport in 1939, it would seem unlikely that they were living there in 1916. This also fits with the source that says the Camoys bought the house in 1946 (seven years after Glyn's death), from J. Gordon Douglas Sr., of New York.

From 1946, the new owners were the 5th Lord and Lady Camoys, otherwise known as Ralph Stonor (1884-1968) and his American wife, Mildred Sherman (1888-1961). As their granddaughter put it, they rebuilt/extended the house in a way that made it a "nightmare for a home decorator" but a "magical" place for young children to grow up and play in. Once the family had settled in, Mildred rechristened the estate "Stonor Lodge" for her husband's 13th century ancestral home back in England, Stonor Park.

Lady Mildred had strong roots in Rhode Island. Her father, William Watts Sherman (1842-1912), was a socially prominent banker of New York and Treasurer of the Newport Casino. Her mother, Sophia Augusta Brown (1867-1947) grew up at the Nightingale-Brown House in Providence and her aunt (Sophia's sister-in-law) built and lived at what is now the clubhouse of the NYYC at Newport, Harbour Court. Mildred was descended from the founder of Rhode Island, Roger Williams (1603-1683), and her mother's family gave their name to the Ivy-league university, Brown, that they established at Providence in 1764.

Lord and Lady Camoys wintered at Stonor Park in England and summered at Newport. There was no question about which house Lady Camoys preferred: She was acutely sensitive to the cold and the lack of central heating in England's ancient country houses had a direct effect on her social life. The same was not be said of her summer home which she enlarged to 21 rooms over 9,100 square feet... with a full central heating system!

Lady Camoys died in 1961 and though her husband continued to summer there (he died at the house in 1968), Stonor Lodge was left to their youngest daughter, Noreen. She was the wife of John Rozet Drexel III (1919-2007) who'd spent his summers at Fairholme and was a great-grandson of the legendary banker Anthony Joseph Drexel (1826-1893). They kept the house the same, but built a large, separate garage and a connecting guest cottage. Noreen's daughter remembered the house fondly: "It was a really fun, happy place. Honestly, it wasn't grand... it rambled. You went from room to room to room".

Unlike its palatial neighbors, Stonor Lodge always maintained an informal, homey atmosphere which was a large part of the reason why Jackie Kennedy came here for a day's peace before her wedding to JFK in September, 1953, at Hammersmith Farm.

Noreen was a close friend of Jackie's mother, Janet Auchincloss, and so Jackie came to know Noreen well. The story goes that the day before her wedding, Jackie ran over to Stonor Lodge to escape the mayhem and steal a day's calm. The maid opened the door to her as Noreen was coming down the stairs with a concerned look on her face: "Oh, Mrs Drexel" Jackie implored, "may I stay here for the day? I need to get away from the house. I won't bother you - I brought a book to read" she said showing the book in her hand. "Of course, Jackie" replied the humanitarian, "we are always happy to see you here". And so, Jackie curled up and enjoyed a day's tranquility in the sunroom at Stonor Lodge before the facing the world and the myriad of flash cameras the following day.

The New Bercowitz House
John Drexel died in 2007. Noreen converted the garage into a comfortable 2,275 square foot home and gave the main house to her children. Five years later (2012), Noreen, the "undisputed doyenne of Newport," died and that year Stonor Lodge was placed on the market. The following year (2013) it was purchased for $3.29 million by Mortimer "Tim" Berkowitz III and his wife, Amelia, both of New York City.

In February, 2016, Stonor Lodge suffered yet another devastating this fire, but this time it burned to the ground. The cause is still "undetermined" but the police are not suspicious. The Bercowitzes are building a new home on the 7,650 square foot imprint that will face north onto Hazard Avenue. The 4-acre estate on which it sits still remains in tact, stretching from Bellevue Avenue to the east and Coggeshall Avenue to the west.

Jackie's Newport: America’s First Lady and the City by the Sea By Raymond Sinibaldi

Newport Tales: Stories of a Newport Childhood By Jay LaCroix

A Walking History of Bellevue Avenue, Newport, Rhode Island By the Preservation Society of Newport

Jackie and Maria: A Novel of Jackie Kennedy & Maria Callas By Gill Paul