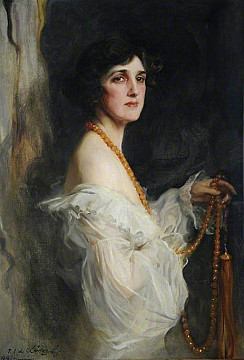 She was brought up between 17 Grosvenor Place in London and Tranby Croft in Yorkshire. She was a great friend of Winston Churchill and helped improve his speech-giving skills when he started out in politics. A natural actress, she performed in both French and English at the small private theater in Chatsworth House when King Edward VII and Queen Alexandra were in the audience. Aside from being a well-known society figure, she was also noted as an excellent horsewoman and ice skater.

In 1899, she travelled to America for the wedding at Beaulieu of a family friend, Julia Grant, to Prince Cantacuzène. Her good looks, fashion-sense and large fortune combined to make quite a stir in society headlines: Muriel was described as, "Great Britain's most beautiful girl" though her style in clothing was remarked to be "peculiar" or at best "eccentric". She was said to be "almost Amazon" in stature with "a superb figure".

It was noted in the press that her sisters called her "impulsive" and she would be sure to break hearts in America as she already had done in England. In 1894, she broke off her engagement to the future Earl of Ancaster who would go on to marry a New Yorker, Eloise Breese. Muriel was the great love of the Duke of Marlborough and they were said to have been engaged prior to his marriage to Consuelo Vanderbilt. Muriel quickly won over the New York press too, who found her: "charming in conversation and when talking... very animated: the dark eyes flash and the beautiful white teeth show"! By September, the New York papers were abuzz with what they expected would be the imminent news of Muriel's engagement to Robert Goelet who'd inherited $60 million earlier that year.

The New York Journal reported, "Robert Goelet has become an ardent worshipper at the shrine of this fair English woman... constantly since her arrival, and he looks extremely happy and unhappy by turns"! Instead Muriel returned to England and Goelet's was another heart she left broken behind her. Another unsuccessful suitor was Prince Francis of Teck and then her parents tried to match her with George Cornwallis-West. But, her eyes were firmly fixed on the notorious lover, the Marquess Luis de Soverell, while George was head over heels with (and later married) Jennie Jerome, Winston Churchill's mother.

During World War One, Muriel became a nurse and tended to wounded officers at her sister's former townhouse, Dorchester House. It was here that she met Captain Warde to whom she was finally - though "not very happily" - married. They divided their time between their homes in London and "Villa Maryland" at Cap Ferrat in the South of France - built for Muriel's mother when the Duke of Connaught was a frequent guest.

After Warde's premature death, Muriel bought Cannon Hall in Hampstead where she lived with her companion, Mademoiselle Jeanne Beliac. Its walls were covered with the impressive Wilson art collection, some of which she distributed between family but she left most of it to the Ferens Art Gallery in Hull, stating "I owe everything to Hull".