Completed in 1917, it was financed by the "quite mad" Stanley R. McCormick (1874-1947) and designed by the Parisian-born artist Jules Henri de Sibour (1872-1938). It replaced the Belden-Noble Residence bought by McCormick in 1906 and became one of the first purpose-built luxury apartment blocks to be erected in the capital. The 60,000-square foot building was designed specifically to blend in with the other Beaux-Arts mansions on Dupont Circle and was initially divided into six apartments with room for more than 40-servants. Longtime U.S. Secretary of the Treasury, Andrew W. Mellon, occupied the top floor and as perhaps its most distinguished resident the building is named for him today, or is otherwise known as the "McCormick Apartments"....
zoom_in 11 images 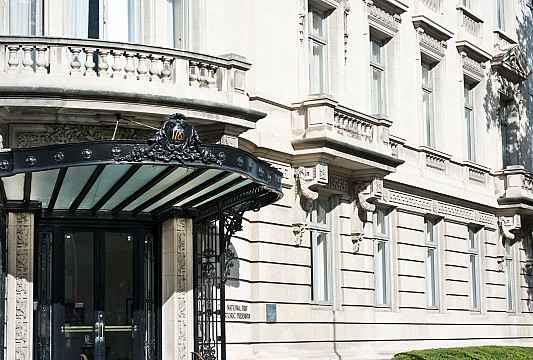 Stanley McCormick was the youngest son of the founder of the International Harvester Company. On paper, life for him started promisingly: he was handsome; a natural athlete; and, graduated cum laude from Princeton University. He became comptroller of the family firm and building this block was one of several successful real estate projects. But, not before long, his mental health declined and he spent the last forty years of his life as a schizophrenic being prodded and probed by various doctors at Riven Rock, the McCormick estate in California. However, his wife (though the marriage was never consummated), Katharine, became a well-known suffragist and used the McCormick millions to almost single-handedly fund the research necessary to develop the first birth control pill.

Andrew W. Mellon lived here from 1922 until his death in 1937, dividing his time between the apartment and Lenmarkee in Pittsburgh. Already a well-known industrialist and the son of the founder of the Mellon Bank, he was the U.S. Secretary of the Treasury through the boom years of the 1920s, dominating the Coolidge administration and significantly reducing the national debt. However, his reputation collapsed with the Wall Street Crash of 1929 and by 1933 he had retired from public life. Nonetheless, he continued to use the apartment intermittently while he completed his plans for the National Gallery of Art.

In 1936, the art dealer Joseph Duveen leased the apartment below Mellon's specifically to showcase a meticulously selected collection of art and sculpture for Mellon's benefit. That year, Mellon paid $21 million for the 42-piece collection, which at the time was the largest single transaction paid for art, beating anything Hearst, Vanderbilt or Frick ever paid.

Other important residents of that Gilded era included: Thomas Fortune Ryan, co-founder of the British-American Tobacco Company; Robert Woods Bliss, who gifted Dumbarton Oaks, his research library, and his collection of pre-Columbian and Byzantine art to Harvard University; and, Edwin T. Meredith, founder of the media conglomerate, the Meredith Corporation, and U.S. Minister of Agriculture under President Woodrow Wilson.

From 1941, the building was partitioned for use as offices. McCormick died in 1947 and his $25 million estate was conveyed to his wife, Katharine. In 1950, she sold the building to the American Council on Education. Twenty years later (1970) they sold it to the public policy think tank, the Brookings Institution. Six years later (1976), it became the headquarters of the National Trust for Historic Preservation and in the same year - perhaps unsurprisingly - it was declared a National Historic Landmark. By 2009, the Trust had outgrown the building and in 2013 they sold it for $36.5 million to another think tank, the American Enterprise Institute. Whereas this stretch of Massachusetts Avenue was known as Millionaire's Row, it then became Embassy Row and is now Think Tank Row.

Duveen: A Life in Art By Meryle Secrest

A History Lover's Guide to Washington, D.C., Designed for Democracy By Alison Fortier