Completed circa 1895, for Isaac Stern (1843-1910) and his wife, Virginia Michels (1860-1927). Standing on the northeast corner of Fifth Avenue between 67th and 68th Street, it was designed by Schickel & Ditmars and was noted for its extravagant interiors. Positioned between the Yerkes Mansion and the George J. Gould Mansion, it stood opposite the even more impressive Whitney Mansion. After it was purchased in 1909 by Thomas Fortune Ryan, he bought three further neighboring properties to create his own art gallery and a 25,000-square foot Italian garden which with a 140-foot frontage along Fifth Avenue was reckoned to be, "probably the most valuable garden site in the world". Ryan's purchases were said to have inspired Frick....
zoom_in 10 images 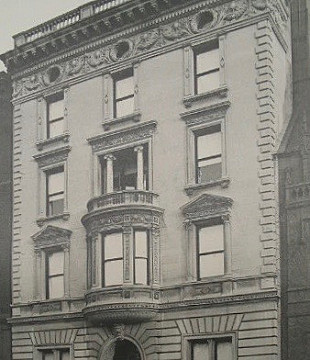 Isaac Stern was one of three brothers who founded the Stern Bros. Department Store on 23rd Street off Madison Square. Aside from building this house, its success allowed him to buy a yacht and a castle (Cedar Lawn) while providing a third of the capital that enabled his son to co-found the investment bank Bear Stearns that famously collapsed in 2008.

In 1892, Stern paid $155,000 at auction for the 55-by-125-foot plot. He employed Schickel & Ditmars - the Stern family's architects of choice - to build his new home which immediately became one of the largest on Fifth Avenue. But, not even a decade after it was finished, Stern had re-commissioned the same architects to draw up plans for another mansion at 42 East 52nd Street and in 1906 he sold his not-so-very-old house for $750,000 to William J. Dingee who'd made a fortune in real estate in Oakland, California.

While the ink was still drying on the deed, Dingee was induced by the City Investing Company to swap his new acquisition for two "investment opportunities" further down Fifth Avenue at Numbers 581 and 583, just north of 47th street. He thought he was on to a good thing, but by 1908 he had overstretched himself and his empire came crumbling down around him. He was declared bankrupt by 1921 and died in obscurity in 1941.

In 1909, Thomas Fortune Ryan paid the City Investing Company $850,000 for the house. It then emerged that he had been the man behind the plan to persuade Dingee to part with his new acquisition, and so America's 10 wealthiest man had pulled off another coup! But, still in need of a bit more room for his art, he also bought 3 East 67th Street from Mrs Edward Ladew, tucked behind and to the right side of his neighbor at 857 Fifth Avenue.

Commissioning Thomas Hastings of Carrère & Hastings - the same men behind the Frick and the New York Public Library - Ryan replaced the Ladew house with his own private museum, a comparatively small but sumptuous 2-story Italian Renaissance building that the less travelled members of the press stretched to dub the "American Louvre". Aside from containing art, it shared practically nothing with that Parisian museum, but it was a bijoux gem in itself: Looking out over 67th Street, the great balustraded balcony was crowned by an arch either side of which Alexander Stirling Calder had carved a pair of languorous figures: the male on the left represented "Imagination" and the female on the right symbolized "Beauty". Inside, Ryan's collection focused more on objets d'art and his collection of Limoges Enamels was reckoned to be the most valuable in world.

"Probably the Most Valuable Garden Site in the World"

In 1910, having put a roof over his art collection in the style befitting members of the Papal Nobility - Pope Pius X had made Mrs Ryan a Papal Countess in 1907 - the Ryans now turned their attentions to what they called a "light protector" for their new home.

In a city in which daylight was becoming an ever rarer commodity, Ryan now bought the adjoining low-slung brownstone building to the right of his mansion that had formerly housed his neighbor's (Charles T. Yerkes') art gallery. Knocking it down, he created an Italian Garden in its place, thereby opening a second side of the house to natural light.

Finished in 1912, the L-shaped garden covered 9,300-square feet and incorporated 32-Corinthian marble columns that had once lined the interior of Yerkes' gallery. It enjoyed a 40-foot frontage along Fifth Avenue and ran back 153-feet before taking a left around the back of the Yerkes Mansion which gave it another frontage of 53-feet on 68th Street.

In 1925, Ryan expanded his garden again to what now became, "probably be the most valuable garden site in the world". He paid $1.1 million for the 125-by-100-foot Yerkes Mansion which he promptly demolished to allow for what now became a staggering 25,000-square foot garden for which he again employed the services of Thomas Hastings.

The garden was well laid out and pleasant but apart from its location it didn't incorporate anything out of the ordinary. It was principally covered by lawn and shaped by shrubbery and flowerbeds.There were two fountains around which were arranged marble benches and the tall stone walls topped with barbed wire that guarded the perimeter were made more pleasing from the inside with lattice work interwoven with vines.

After Thomas Ryan died in 1927, his townhouse, art gallery and gardens - an amalgamation of no less than four of Manhattan's priciest properties - became the home of his fourth son, Clendenin J. Ryan. In the early 1930s, commuters on the buses that went up and down Fifth Avenue occasionally caught a glimpse of Clen Ryan sitting back in one of the benches reading his morning paper. This privilege gave the city an extra $40,000 in taxes every year and in 1930 Clen Ryan's Fifth Avenue estate was valued at $7.5 million.

By 1937, Clen Ryan had moved to darker, but quieter surroundings at 32 East 70th Street. Sadly this didn't help ward off his depression and two years later he was found face down in his gas fire, dead, with the gas pipes still hissing. Earlier in the year, he had lent his art gallery on 67th gallery street to the city who continued to use it for various exhibitions until the Ryan family donated it to the Seaman's Church Institute. In 1943, having been equipped and furnished at the expense of the Ryan family, the former art gallery was re-opened as the Janet Roper Club for the benefit of America's merchant seamen.

In 1949, the Ryan's Fifth Avenue estate was sold to Jesse J. Secoles who erected a 19-story apartment block in its place. In 1962, its neighbor on 67th Street, the former George J. Gould Mansion, as well as the Janet Roper Club next door, met with the same fate.

House of Cards: A Tale of Hubris and Wretched Excess on Wall Street By William D. Cohan