Completed in 1909, for Edward Henry Harriman (1848-1909) and his wife Mary Williamson Averell (1851-1932). The mansion is unique among the Gilded Age Estates for being wholly American - from the materials used to the decoration within, this was an expression of American excellence. Arden House sits on top of Mount Orama and covers 97,188-square feet of living space, making it the 4th largest historic house constructed in the United States, behind only Biltmore, Oheka Castle and Whitemarsh Hall. Today, the Arden Estate is comprised of 450-acres of protected land within the Palisades Interstate Park. Only 40-miles from New York City "The Arden House" is operated as the country's first - and among its premier - conference centers....
zoom_in 7 images 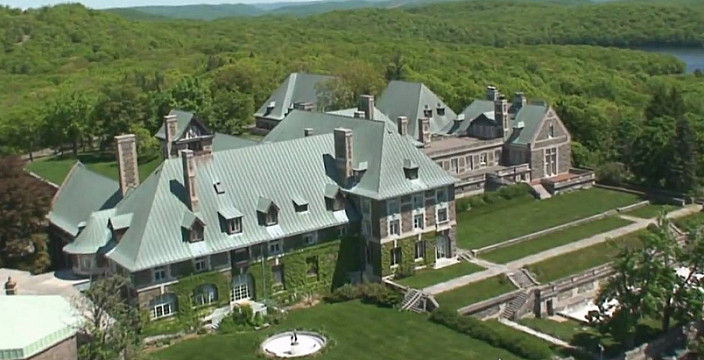 E.H. Harriman was the son of a clergyman. He quit school aged just 14 to work on Wall Street and aided by his uncle, Oliver Harriman, by the age of 22 he had purchased a seat on the New York Stock Exchange. Through his father-in-law, W.J. Averell, he became interested in railroads and soon became one of the leading railroad barons of his era, leaving a fortune of $100 million by the time of his death. His wife's family were long associated with the progression of Ogdensburg, New York, and her great-uncle, William Holt Averell (1794-1873), had purchased the historic Otsego Hall that became famous as the home of James Fenimore Cooper, author of The Last of the Mohicans (1826).

In 1886, E.H. Harriman acquired the Arden estate at auction for $52,500. It was then comprised of 7,863-acres and had previously been in the possession of Peter Pearse Parrott (1811-1896). Parrott had named it for his wife, Mary Antoinette Arden (1822-1896), who grew up at Ardenia. The Parrott family invented the Parrott Guns & Cannon, and as a boy, Harriman had worked in the iron foundry that belonged to Peter's brother, Robert. E.H. Harriman grew up to make his own fortune in the railroad business and after acquiring Arden he added a further 20,000-acres to the estate, including the land on which the foundry had stood that would later become part of the Harriman State Park.

In order to determine the finest vantage point on which to build his house, Harriman first set about channelling over 40-miles of bridleways through the dense forest of his vast estate. By riding his horse on these paths, in 1905 he eventually found selected the ideal site: on the crest of the forested ridge that rises steeply from the valley with the Ramapo River on one side and the wooded ravine of Forest and Cranberry Lakes on the other.

The railwayman was quite unperturbed by the logistical difficulties of building such a house 1,300 feet above sea level: Doing what he did best, he built a cable railway by which workmen and materials could easily be taken to and from the site. A deep artesian well was drilled to supply the estate with water, the forest was cleared and the granite (with which the mansion was built) was blasted to create a 50-acre plateau on which the house and gardens would stand. Carefully overseen by the Harriman, the plans and construction of the house were completed by the celebrated architects, Carrère & Hastings.

The mansion was approached by a carriage drive that for 3-miles meandered its way up through the estate. However, for visitors with automobiles a more direct route was available via a horizontal platform that raised the car and passengers directly up the steep side of the mountain in just 10-minutes! The irregularly shaped mansion was bounded by a high wall covered in Japanese ivy on one side, with a view across the wooded hills on the other. In her book, Maury Klein described a visitor's impression in 1914:

A wide corridor of colored marbles led into a giant room with a marble floor softened by rugs and bearskins... A fireplace (as tall as a man was) flanked by sofas, easy chairs, and two of three tables with stacks of magazines and newspapers. All the rooms at Arden were cavernous and bordered a central court with a fountain, shrubbery, and some statuary. Vases and tubs of flowers lined the corridors and spilled over into every room. A grand stairway of unpolished white marble led (guests to their) bedroom.

The dinner was delicious... the servants well-trained and unobtrusive... The organ room was about the size of the Episcopal Church in Medina. Another huge fireplace dominated one end, and a giant loft concealing the organ stood at the other beneath a high, vaulted ceiling... The room could seat at least two hundred people. An immense bas-relief of an Indian hunting buffalo, done by Mary's son-in-law, Charles Cary Rumsey, loomed above the fireplace.

In stark contrast to many of the Gilded Age Estates that strived to achieve equality with the great houses of Europe, Harriman's sort to be an an expression of purely American excellence. The carved woods, paintings, tapestries, marbles and sculptures were all sourced from, and made, in the United States.

The Harrimans carefully oversaw every detail of design to ensure its place: Murals by (Barry) Francis Barrett Faulkner (1881-1966) lined the corridors around the inner courtyard; a bas-relief of Harriman by James Earle Fraser (1876-1953) stood over one of the fireplaces; the Harriman's son-in-law, Charles Cary Rumsey (1879-1922), created a fountain of the Three Graces; corbel carvings of bighorn sheep in the music room; and, at least two marble fireplaces, one of which featured a caricature of the architect Thomas Hastings (1860-1929). There were tapestries by the Herter Brothers that told the story of the creation of the estate; and, photographs by Edward Sheriff Curtis (1868-1952) of the Alaska Expedition of 1899 in which Harriman participated lined the "Indian Corridor".

The Harrimans moved into their country home in the summer of 1909, but by September of that year Ned Harriman was dead, leaving a fortune of $100 million. In 1910, in accordance with his wishes, his widow and elder son, W. Averell Harriman (1891-1986), future Governor of New York, donated 10,000-acres of the family estate and $1 million to create and maintain the "Harriman State Park". The Harriman family remained at Arden while Mrs Harriman became increasingly involved in artisanal and ecological philanthropy

When America entered World War II, W. Averell Harriman leant Arden to the U.S. Navy who transformed it into the first Navy convalescent home in America, following successful examples set by other large houses in England and Russia. The Harrimans continued to use the home as their summer retreat after the war, up until 1950. Averell and his younger brother, the financier Edward Roland Noel Harriman (1895-1978), then deeded Arden to Columbia University to serve as the home of The American Assembly - the public policy institution founded by Dwight D. Eisenhower.

In 1966, Arden was added to the National Register of Historic Places. In 2007, according to The New York Observer, Arden and its remaining 450-acres was purchased by the Open Space Institute for $4 million. They had intended to sell the (protected) land to the State of New York, but the plan did not materialize. In 2011, Arden was sold again for $6.5 million, becoming the headquarters of the nonprofit organization Research Center on Natural Conservation, backed by the Beijing-based real estate company, Soufun Holdings. Today, "The Arden House" is billed as one of the country's premier conference centers.

Harriman Trails: A Guide and History By William J. Myles

Citizens of London: The Americans Who Stood with Britain in Its Darkest, Finest Hour By Lynne Olson

The Last of the Mohicans : Director's Definitive Cut By (Starring) Daniel Day-Lewis