Completed in 1896 as a palatial twin residence for "Jack" Astor (1864-1912) and his widowed mother, Mrs Lina (Schermerhorn) Astor (1830-1908). A bitter feud between the the two rival branches of the Astor family saw the house (350 Fifth Avenue) in which Jack was born and his mother had lived for thirty years demolished and replaced by the Waldorf-Astoria Hotel that he co-owned with his loathed first cousin, Willy Astor. After his mother's death, Jack set about converting the chateau into a single residence for him and his new wife, the beautiful but glacially cold Ava Lowle Willing....
zoom_in 15 images 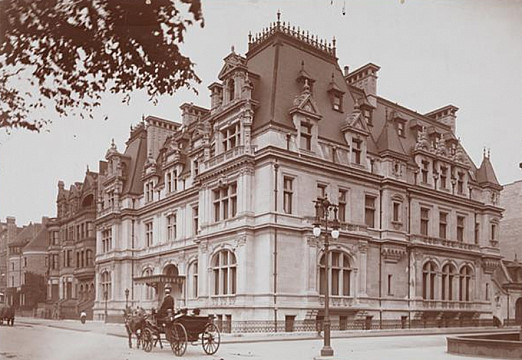 Before the works were complete, Jack and Ava's marriage was over and she was unkind enough to publicize the fact that she'd only ever married him for his money. On completing the works, Jack still held a housewarming for 208-guests in February, 1911, with Mrs Ogden Mills stepping in to assume the role of hostess; and, by September there was a new (albeit much younger) Mrs Astor with whom to share his home.

Jack famously died aboard the Titanic the following year and his young widow and their new-born son, Jakey, were now the sole proprietors. In 1916, she remarried William K. Dick and thereby relinquished ownership of the chateau which now fell to her stepson, Vincent Astor (1891-1959) and his wife, Helen Huntingdon (1893-1976). These far more socially-aware Astors entertained at the chateau until 1924 when its contents were auctioned off and it was replaced by the Temple Emanu-El that stands in its place today.

The Second Mrs. Astor: A Heartbreaking Historical Novel of the Titanic By Shana Abe