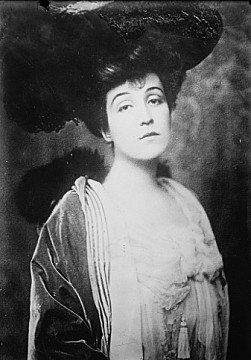 Born in Philadelphia, she came from a long line of distinguished Americans and counted among her immediate ancestors: Thomas Willing (1731-1821), 1st President of the First Bank of the United States; Edward Shippen (1639-1712), 1st Mayor of Philadelphia; William Moore (1735-1793), 4th President of Pennsylvania; and, William Barton (1754-1817) who co-designed the Great Seal of the United States. Her paternal grandmother, Mrs Eliza Willing, was a first cousin of the Duchess of Plaisance.

In 1891, "the divinely beautiful" Ava married Jack Astor in what was one the most prominent society weddings of the Gilded Age. But, it was not a happy union. Jack was handsome and one of the richest men in the world, but his anxiety made him clumsy and Ava mocked him and called him "stupid" in front of strangers. All contemporary accounts described Ava as a, "cold, hard, arrogant woman incapable of loving anybody". However, she had "brains and presence" and shined in society next to her awkward husband who was consigned to follow her about, "like a bedraggled and slightly bad-tempered spaniel".

Ava was known to have been one of the several high profile lovers of the "breathtakingly good looking" Winthrop Rutherfurd (1862-1944) and after only five years of marriage she all but separated from  Jack and moved to England - which came as both a relief and an embarrassment to him. There, she mixed in the same circles as King Edward VII.

In 1909, Ava returned to America and filed for divorce. She made no secret of the fact that she found Jack "repulsive" and had only married him for his name and money. She walked away with a settlement of $2 million. Their son stayed with Jack (to whom he was devoted) while from 1911 Ava and their daughter - who was in fact said to have been fathered not by Jack, but by Cyril Henry Hatch - moved back to England, leasing Sutton Place. When Jack famously went down on the Titanic the following year, she did not attend his funeral. She did however return to America to take custody of their son (principal heir to his father's $87 million) who she would later often tap for money.

Ava now divided her time between New York and Newport while spending her winters in London. Just after the outbreak of the First World War (1914), she made headlines by exposing her flawless back for a ball in London dressed as the Statue of Liberty. During the War, she was vice-president of the American Women's War Hospital in Devon.

Ava had no shortage of admirers and among them was the young Grenadier Guards Captain Montagu Parker (1878-1962), later the 5th Earl of Morley. He is remembered as the original "Raider of the Lost Ark" who in 1911 led an expedition to unearth King Solomon's treasure under the Temple Mount in Palestine. Rumor had it that after laying his heart on the line to Ava she retorted coquettishly, "well, bring back the Ark of the Covenant and I will talk to you again". Driven by passion, he set to with "tremendous energy" but both the expedition and his hopes for winning Ava came to nought.

Ava was always attractive (she "was still looking lovely" in 1938) and had a string of young English lovers so when her engagement was announced to a man fourteen years her senior, everyone was taken by surprise: In 1919, she became the second wife of the still dashing former member of the Royal Household, Tom Lister, 4th Lord Ribblesdale. In contrast to first impressions, it was Ava's decadent expenditure that necessitated the marriage. He married her for companionship, not money (she forfeited her Astor dollars on marrying him), while it was she who got his money, position, and a title to boot!

The caustic tongue of the popular society cook Rosa Lewis - "the Duchess of Duke Street" - a former lover of Ribblesdale's and the owner of the Cavendish Hotel in London (where somewhat extraordinarily they chose to spend their four-week honeymoon) called Ava, "not only Willing, but eager"! Ava was the polar opposite of Tom's warm, fun-loving first wife; and, though his children and family were civil enough to Ava's face, behind closed doors they "positively disliked" her.

Ava preferred her townhouse at 18 Grosvenor Square (a leftover from her divorce) and only once visited the Lister family's ancestral seat, Gisburne Park, where Tom preferred to spend his time. Their differences quickly became apparent: Ava was still vivacious and enjoyed the bright lights of London while Tom was getting on towards seventy and preferred the quiet life and country pursuits. After six years, before it could end in divorce, the old Baron died. Ava "plunged back into high society with a vengeance. She was soon seen everywhere, heavily scented and followed by half a dozen yapping Cairn Terriers". At about this time a young Lytton Strachey took tea with her in London:

The immense size of that Grosvenor Square house - double doors flying open, a vast hall with a butler and two female footmen permanently established in it, vistas beyond of towering pilasters and a marble staircase and galleries - it struck awe into the heart. Then a door quite close at hand was swiftly opened, and I was projected into a large square room, in a distant corner of which, on a sofa, was a lady whom in my agitation I hardly recognised - the colour of hair seemed to have quite changed - and as I advanced three small dogs rushed out at me snapping. I at last reached the sofa and we had a long but not amorous tete-a-tete. The poor dear woman is terrified of Bolshevism - thinks Mr Smillie (Robert, Trade Unionist & Leader of the Miners) will lead the mob against her - and asks anxiously "Do you think they'll all go red?" I read her a lecture on the unequality of wealth, and left her trembling to get ready for the Opera.

By 1933, Ava had given "a depressing account of her daily life" to the future British Prime Minister, Herbert Asquith, which led him to have "less and less envy for the very rich". In 1940, Ava returned to America as a war refugee. She reclaimed her American citizenship (which she had renounced to marry an English Lord), but contrary to U.S. law she continued to style herself "Lady Ribblesdale". When she died in her apartment at 720 Park Avenue in New York, she left a token $25,000 to her son, Vincent (despite all the money he had lent her from the Astor coffers over the years), leaving the lion's share (estimated at $1-3million) to her daughter's children. Nothing was left to charity.

The Husband Hunters: American Heiresses who married into the British Aristocracy By Anne de Courcy

The American Heiress By Daisy Goodwin

To Marry an English Lord: Tales of Wealth and Marriage, Sex and Snobbery in the Gilded Age By Gail MacColl & Carol McD. Wallace

The Heir Apparent: A Life of Edward VII, the Playboy Prince By Jane Ridley

Lily and the Duke (Sex and the Season: Book 1) By Helen Hardt