Built in 1862, for William Backhouse Astor Jr. (1829-1892) and his wife, Caroline Webster Schmerhorn (1830-1908). In stark contrast to the A.T. Stewart Mansion that appeared in 1869 on the other side of Fifth Avenue, the Astor's comparatively modest redbrick-and-brownstone - the beating heart of New York's "400" - might on first glance seem surprisingly reserved for the home of New York's leading society hostess. In 1895, this prime piece of Manhattan real estate was replaced by the Waldorf-Astoria Hotel which was razed in 1929 in favor of the Empire State Building....
zoom_in 17 images 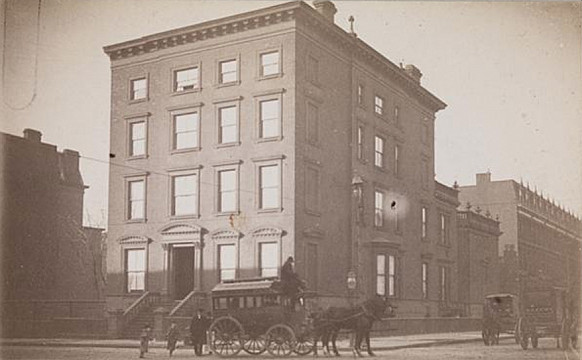 In 1854, William's father gave each of his two sons half of the same lot of land. In 1859, at 338 Fifth Avenue, John built a Frenchified version of the house his younger brother would put up three years later. They were separated by a walled garden with a fountain at its center. Though imposing, both houses may appear plain by the standards we usually associate with New York's aristocracy, but it was another ten years before Fifth Avenue began to see the chateaux and palaces for which it became synonymous in the Gilded Age.

William's father died in 1875 and left the bulk of his fortune ($90 million) to be divided equally between his two sons. This created a problem as it was now not entirely clear who was the senior figure in the family. Cracks had already been appearing in the brothers' once close relationship, but now their wives started to get involved too. Although, William's socially fanatical wife, Caroline, regarded the showy new chateaux and palaces being put up by New York's new money with nothing short of contempt, neither could she ignore the fact that her stately 'old' home was now looking perhaps a little tired.

Out went the formal English Regency Dining Room, transformed into the glittering white and gold of Louis XVI; and, the refined Adam-style Drawing Room was given an equally flamboyant makeover, dressed up in rich golden Rococo with a profusion of painted frescoes. It was the Rococo Drawing Room which was then chosen as the backdrop to their formal family portrait painted by Lucius Rossi that was often shared with the press.

William cared little for his wife's social ambitions (and some might say equally little for his wife!) and tended to avoid New York, preferring the company of a string of other women at Ferncliff or on his yacht in Florida or Europe. Her husband's notable absence was of little consequence to Mrs Astor who was kept companion by Ward McAllister.

An Evening with Mrs Astor

Mrs Astor maintained a resident staff of 18-servants and sometimes as many as 125-additional caterers were brought in for larger events. The staff at No. 350 were attired in court livery: green plush coats, white knee breaches, black silk stockings, gold buckles, and red whipcord vests with brass buttons emblazoned with the freshly-conjured up Astor coat-of-arms. A typical midnight supper would be served on plates of silver or gold and might consist of terrapin, fillet of beef, canvasback duck, partridge with truffles, quail, game, and foie gras in aspic. Pyramids of citrus fruit and mounds of orchids, roses, apple blossoms, and azaleas added color to the dining room table. Mrs Astor did things "properly" according to old Knickerbocker tastes, but as the years rolled on the formality of her dinners and the lack of new faces made for more of an ordeal than a party!

The Ballroom, Bastion of "The Four Hundred"

By any standards, Mrs Caroline Astor was an unbearable snob. As New York swelled with crisp new dollars, "Lina" and her equally class over-conscious friend, Ward McAllister, busied themselves by drawing up a list which would determine unequivocally, precisely who was, and glaringly who was not, counted among New York "society".

There were however two caveats which made genealogical and architectural allowances conveniently favorable to Lina: Firstly, anyone on the list had to be from a family that had enjoyed money for at least three generations. This worked out well for the Astors as the fortune Lina enjoyed was accumulated by her husband's grandfather - a man as rough and ready as they came when he stepped out of the backwoods and built the Astor Mansion in 1803. The second caveat was that the list would be limited to 400 names: the same number of people who could fit into Lina's new ballroom at 350 Fifth Avenue.

The pièce-de-résistance to her renovations at No. 350 was the ballroom: Lina built a new extension onto the back of the house that had previously been the stables and created an entertaining space that would serve as the beating heart and spiritual home of "the 400". Its silk-lined walls were all but invisible for Lina's vast and expensive art collection so that when the room was not being used for entertaining it doubled as an art gallery.

When not being danced on, the parquet floors were brightened up with Persian rugs that had once added a flourish to Lina's childhood home in Brooklyn. Under the chandelier that groaned with crystal, the room was punctuated with plush velvet, silk and satin seats of various shapes and sizes, more often than not in Lina's preferred color: Royal Purple.

Bringing Down the House of Astor
By 1890, the Fifth Avenue block occupied by the Astor brothers - purchased for $20,500 in 1827 - was even then worth a staggering $35 million. The combined Astor fortune may have been more buoyant than ever, but relationships between the two rival branches had hit rock bottom. "Willy" Waldorf Astor was Lina’s nephew, but there was no love lost between them. By 1891, having grown tired of politics and competing with his relentless aunt, he decided New York was not big enough for the both of them and left for England.

As his parting shot in 1891, he ordered the destruction of his childhood home and in its place built the “Waldorf Hotel” whose 13-stories would tower authoritatively over his aunt's home as a stark reminder of who was boss. The hotel that would set the standard for all hotels in North America was built as much with commerce in mind as with spite. The noise, dust and crowds of workmen left Lina looking at a wall of faceless brick before streams of tourists arrived, and just as Willy hoped, it made Lina’s life a misery.

George Boldt and the Waldorf-Astoria

In 1895, Lina's beloved home of just over 30-years and seven other Astor-owned houses on the block were reduced to rubble. In 1897, the 16-story "Astoria Hotel" was finished, by which time it had been agreed that the two hotels would join together as one, known as the Waldorf-Astoria that the socialite Louise McAllister then popularly dubbed, "The Hyphen". As a tribute to Lina Astor and the role her home played in New York society, the hotel's "Astor Dining Room" was a reproduction of the original Dining Room at No. 350.

Having once sneered at those who showed off their wealth with showpiece mansions, in 1895 Lina and her son moved into their newly completed chateau at 840 Fifth Avenue. But, Fifth Avenue was no longer the preserve of the well-heeled, it - and Lina herself - had become a tourist attraction and she lived out her final years shrinking from the windows to avoid the rubberneckers outside all hoping to catch a glance of the Mrs Astor.

A Season of Splendor: The Court of Mrs. Astor in Gilded Age New York By Greg King

Empire: A Tale of Obsession, Betrayal, and the Battle for an American Icon By Mitchell Pacelle

Top Drawer: American High Society from the Gilded Age to the Roaring Twenties By Mary Cable

What Would Mrs. Astor Do?: The Essential Guide to the Manners and Mores of the Gilded Age By Cecelia Tichi