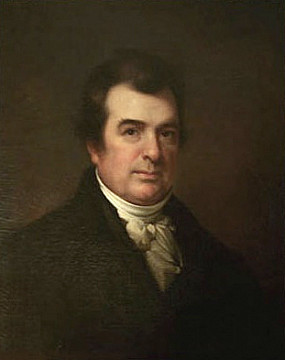 He was born at 44 Frankfort Street, New York City, the son of a Scottish Artillery Sergeant who settled in New York after the French-Indian War. He was educated at Columbia College and Princeton before receiving his medical degree from the University of Pennsylvania. In 1792, he enrolled at Edinburgh University to improve his knowledge of Botany and returned to set up his practice at New York in 1796, becoming a popular family doctor. In 1804, he was called upon to be the doctor present at the ill-fated Hamilton-Burr Duel, being a friend to both men. Hosack was a pallbearer at Hamilton's funeral and paid $400 towards clearing his widow's debts. Three years later, he leant money to Burr for passage to Europe to escape his creditors while awaiting trial.

Hosack was Professor of Natural History, Botany, Midwifery and Surgery at Columbia College. In 1799, he established the first Lying-In Hospital in New York for poor pregnant women; and, in 1801 he established the Elgin Botanic Garden, the first botanical garden in the United States. He was the founder and first president of the New York Horticultural Society, the first such organization in America. He co-founded and was the 4th President of the New-York Historical Society; President of the Literary & Philosophical Society of New York; Member of the American Antiquarian Society; Fellow of the American Academy of Arts and Sciences; Member of the Royal Swedish Academy of Sciences; and, a Fellow of the Royal Society in the United Kingdom. He established a botanical garden on his estate at Hyde Park which is better known today as the Vanderbilt Mansion.

The Great Fire of New York (1835) destroyed 530 of the City's 700 buildings, including all Hosack's property which was valued at $300,000. He died of a stroke one week later, and his pallbearers included Edward Livingston and Morgan Lewis. He was married three times and had nine children, seven of whom survived to adulthood. Through his third wife, Mrs Magdalena Coster, he became stepfather to a further seven children, including Washington Coster. The Hosacks had been living at 65 Broadway but when the two families united after 1825 they moved in with the Costers both at 85 Chambers Street and their magnificent country estate at Kip's Bay, the Coster Mansion. He later bought another house a few doors down on Chambers Street for his literary and artistic 'salon'.

American Eden: David Hosack, Botany, and Medicine in the Garden of the Early Republic By Victoria Johnson