Completed in 1805, for Janet Livingston (1743-1828), the widow of General Richard Montgomery (1738-1775) who was killed leading a failed attempt to take Canada during the American Revolution. It is the only surviving neo-classical country house to have been designed by architect Andrew Jackson Davis (1803-1892). The riverfront property with its vista of the Catskill Mountains is also the only Hudson Valley estate house from its era to survive intact. It remained in the same family until 1986 when it was sold to Historic Hudson Valley. Bard College acquired the estate in 2016. The grounds are open during daylight hours and tours of the house are available seasonally....
zoom_in 10 images 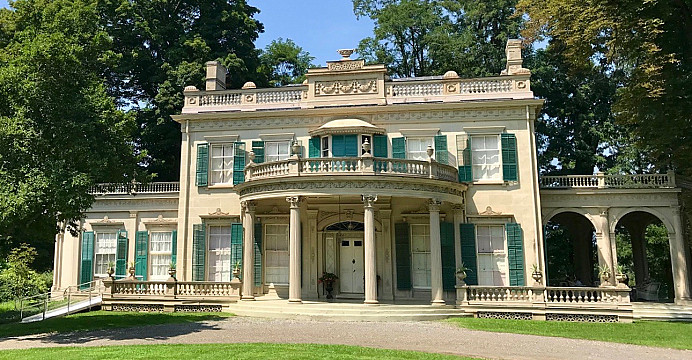 In 1680, Colonel Pieter Schuyler (1657-1724), 22nd Colonial Governor of New York and the first Mayor of Albany, purchased the land along the river at Cruger’s Island, including most of Red Hook. In 1720, he sold the stretch of land directly along the riverfront to Barent Van Benthuysen (1664-1723). His slaves cleared a plot of this land along the road to Cruger’s Island before building his home known as Van Benthuysen’s Castle.

Over the years, the Van Benthuysen estate was gradually partitioned and sold off or lost in mortgage foreclosures by succeeding members of the family. In 1802, Mrs Montgomery purchased 242-acres from John Van Benthuysen (b.1764) for $3,300 plus interest and moved from the home she had designed with her husband, Grasmere, to be closer to her family at Clermont Manor. Her new estate was located immediately to the south of the estate better known as Blithewood that belonged to her sister, Mrs Alida Armstrong.

Together with her husband's nephew - William Jones (1778-1813), youngest son of 4th Viscount Ranelagh - Janet set about building her elegant and formal home overlooking the Hudson River that she named "Chateau de Montgomery".

The entrepreneurial Mrs Montgomery - who once raised six thousand silk worms in a silk-producing project - had long held a passion for floriculture. She collected rare flowers, shrubs and trees; and, with the help of gifts from her many faraway family and friends her gardens soon included jasmine, mango and orange trees. In 1809, she wrote to her brother, the U.S. Secretary of State and eventual heir, Edward Livingston (1764-1836), “if I have a pleasure, it is in cultivating my plants.”

Before her new house had been completed, Mrs Montgomery had already started using the surrounding land to operate a farm supplying the local people, and she shipped any excess produce up to New York City. At the center of this profitable commercial venture was the nursery she established with apple, cherry, pear, peach, plum, apricot and nectarine trees, as well as grapes, berries and seeds.

Mrs Montgomery never remarried and leaving no children she had intended this property to be left to her favorite nephew, William Jones. He having predeceased her, she named another nephew to be her chief beneficiary, Lewis Livingston (1798-1822), the youngest son of her brother, Edward, who after the death of his mother, Mary McEvers (1768-1801), had been sent to live with her at Chateau de Montgomery. But, he too predeceased her and she changed her will for the last time, this time leaving her home to her favorite brother, the previously mentioned Edward.

Edward moved in with his second wife, the beautiful Louise d'Avezac de Castera (1785-1860), renaming the house "Montgomery Place". Though on a lesser scale, they continued to operate the farm, orchard and nursery as well as laying out walks and trails to the waterfalls and through the woods north of the mansion.

Edward's political commitments left him with little time to enjoy the estate, living for the most at Decatur House in Washington D.C. where his wife, Louise, hosted lavish dinner parties and their daughter was married. Returning to the States in 1835 having served two years as U.S. Minister to France, Livingston retired from public life to Montgomery Place with plans to build a new wing and orchard, but he died there the following year before his plans could take effect.

In 1844, Louise employed Andrew Jackson Davis (1803-1892), and together they began to transform Montgomery Place from a formal country seat into a gracious riverside villa. Over the next thirty years, the estate was improved by Davis working closely with both Louise and her daughter, Cora Livingston (1806-1873), who had married the first major American collector of Shakespearean folios, Thomas Pennant Barton (1803-1869).

Louise's southern roots saw the house become ornate and French in appearance. Wings were added either side and a verandah opened up the west elevation with the use of a colonnade and a similar portico at the rear of the house. In all, there are some twenty-two buildings spread throughout the 434-acre estate, and outbuildings include the coach house, the Swiss Cottage and the greenhouse.

On Cora's death in 1873, she gave life tenancy of Montgomery Place to two cousins on her mother's side of the family while ownership would pass directly back after their deaths to a cousin on her father's side, Julia Livingston (1801-1882), and her descendants.

The life tenants were Louise Livingston Hunt (1835-1915) and her brother Congressman Carleton Hunt (1836-1921), of New Orleans, who both spent their summers at Montgomery Place. In the meantime, Julia Livingston had married Major Joseph Delafield (1790-1875), but she was outlived by Carleton and so her only surviving child, Maturin Livingston Delafield (1836-1917), became the heir apparent. When Carleton Hunt died in 1921, he had outlived Maturin too and as such the property passed to Maturin's eldest surviving son, Brigadier-General John Ross Delafield (1875-1964).
The Delafields

General Delafield and his wife, Violetta Susan Elizabeth White (1875-1949), made the last major alterations to Montgomery Place while establishing two separate companies to own and operate the property. Mrs Delafield set about improving the gardens, following in the footsteps of Mrs Montgomery, Louise Livingston and Cora Barton, through their mutual passion for floriculture and botany.

Violetta added a herb garden, rose garden and the terraces to the west of the property. Meanwhile, General Delafield added squash and tennis courts, and oversaw the installation of a modern heating and plumbing system. He took a particular delight in the history of the old place and the artefacts that had belonged to Edward Livingston can still be seen there today.

In 1964, the house passed to the General's son, Major John White Delafield (1905-1985) who was descended on his grandfather's side from Mrs Montgomery's sister, Gertrude Livingston (1757-1833), of Staatsburgh House; while on his grandmother's side, he descended from Mrs Montgomery's brother "The Chancellor" Robert R. Livingston (1746-1813). In 1975, he placed the house on the National Register of Historic Places.

After the Major died, the controlling interest of Montgomery Place was passed to his son, (John) Dennis Delafield, President of Delafield Asset Management in New York. In 1986, he and his cousins sold the house and its contents for $3 million to Historic Hudson Valley while the family papers were given to the Princeton University Library. In 1992, after a five year, $3 million restoration project, the house was declared a National Historic Landmark. In 2016, it was acquired by Bard College and today the grounds are open throughout daylight hours and tours of the house are seasonal. 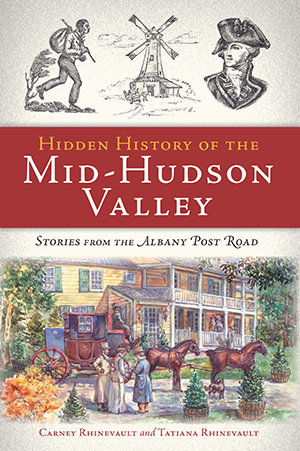 Hidden History of the Mid-Hudson Valley: Stories from the Albany Post Road By Carney Rhinevault and Tatiana Rhinevault