Built from 1850, for George Augustus Elliot (1820-1888) and his first wife, Harriet Reeve Brown (1830-1850). The mansard roof was added by the Johnes family in 1860 when the house was described as being in Newburgh on the road leading north east from "the Balm of Gillead tree" from which Balmville takes its name. It was the childhood home of Mrs Natalie (Knowlton) Blair, later credited as, "the earliest woman collector of Americana of the first rank," before being sold to the Beal family. The artists Reynolds and Gifford Beal helped design the gardens, converted the carriage house into their studio, and in 1914 the silent movie, "The Scales of Justice" was filmed here. Echo Lawn is now known as Villa Stonegate and the outbuildings are known as Stonegate Farm. It was added to the National Register of Historic Places and remains privately owned....
zoom_in 13 images 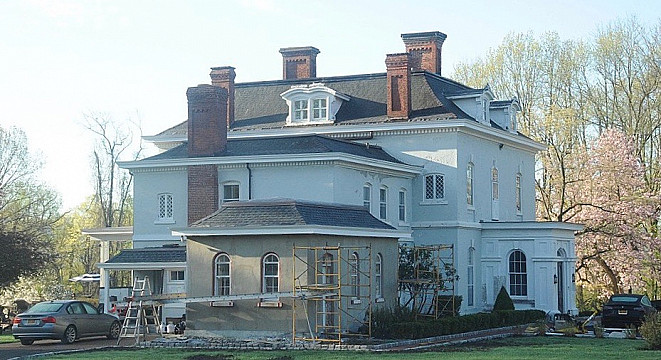 George A. Elliot was born in Connecticut, a son of the President of the New Haven County Bank and through his mother a great-great-grandson of Jonathan Law (1674-1750), Colonial Governor of Connecticut. In 1849, he married Harriet, daughter of Judge and U.S. Congressman John W. Brown (1796-1875), of Newburgh, who as a wedding gift gave the couple 37-acres, "scattered with fruit orchards". The land was situated immediately to the west of the Delano estate, Algonac, the childhood home of Franklin D. Roosevelt's mother and where he was married. A stream divided the two properties over which a rustic bridge was built in later years and a statue of Pan stood in a bed of myrtle and forget-me-nots.

Mrs Elliot died barely a year after they were married, but George continued to develop the land and finished their home - a large, uncomplicated Federal-style house. According to the Newburgh Historical Society, by 1859 Elliot had sold up to Edward R. Johnes, which corresponds with the date when the mansard roof was added in the Second Empire style - introduced to America a decade or so earlier by architect Detlef Linau. Elliot's decision to sell was more than likely to do with the fact that he took a second wife in January, 1860.

Edward R. Johnes (1814-1877) was the youngest brother of Charles Alexander Johnes (1796-1832), a merchant who settled in Newburgh and was elected its Mayor. Edward went into business with Charles' son, William Pierson Johnes (1821-1853), and they quickly became prominent wholesale dry goods merchants specializing in the manufacture of cotton and linen. In 1844, at Newburgh, Edward married Mary (1824-1896), who was "reputed a beauty," the daughter of Hiram Bennett (1793-1850), "a wealthy and highly respected citizen". She was a first cousin of Daniel Bennett St. John, President of the Newburgh Savings Bank and co-founder of The New York Times who lived all his life at Newburgh.

Mrs Mary Johnes outlived her husband and, "still a lady of charming presence," she continued to make her home at Echo Lawn joined by various children. Shortly before she died, her husband's nephew, Edward R. Johnes (1852-1903), and his new wife, Winifred, listed Echo Lawn as their home in the Social Register of 1894. Winifred was previously married to Ingersoll Lockwood, author of the "Baron Trump" children's novels. They lived here only very briefly with Mrs Johnes before moving into the literary idyll, Idlewild.

Mary Johnes died in 1896 and Echo Lawn was conveyed to her daughter, Mrs Mary Bennett (Johnes) Knowlton (1852-1922), the young widow of the popular and dashing Danford Henry Knowlton, "so genial a friend, so cultivated a gentleman, and so valued an officer". It was here that their daughter, Natalie, developed her passion for horticulture that would later be outshone by her interest, knowledge, and collection of Americana at Blairhame.

In 1908, Mrs Knowlton sold Echo Lawn to the as yet unmarried Thaddeus Reynolds Beal (1870-1932), then General Manager of the Poughkeepsie Light, Heat & Power Company. His father, W.R. Beal, had moved the family to up to Newburgh from about 1895 and became President of the Central Hudson Gas & Electric Corporation. Thaddeus succeeded his father as President in 1912 and four years later he married Alice Dresel (1893-1988).

Thaddeus was the brother of the noted artists Reynolds and Gifford Beal. He allowed them full use of Echo Lawn and gave them his permission to convert the carriage house into a studio bathed in natural light from a 50-square foot, north-facing window.

In 1911, Reynolds Beal (1866-1951), sometimes called "the American Van Gogh," returned from Europe where he had spent more time than usual sketching famous gardens eg., Hampton Court in England and the Tuileries and Luxembourg Gardens in Paris. Back at Echo Lawn, he leant on those sketches to help design the Italian walled garden that features a fountain signed by him with the date, 1911. His sketchbooks reveal a fountain for a garden that operated in, "the old Italian way," and he almost certainly put his naval background to work to bring it to life here. The Italian garden led on via a gravel path to a third fountain, best described by one of Thaddeus' grandchildren, Julie Moir Messervy:

The path from the sunken garden to the “frog pond” was flanked to the south by the lawn’s end and a great oak tree at its apex. To the north hemlocks rimmed was a semi-circular garden of hybrid tea roses. A path led through a cherry tree allée and towards a one-acre vegetable garden beyond. South of the circular fountain was a short set of stairs to a Concord grape arbor that extended nearly half a mile to the pond. Eventually the Japanese beetles proved too great an enemy to the grape crop and the vines were removed. There was a four-acre lawn filled with oak trees and a great Southern magnolia. A copper beech once stood at the house’s front entrance but has since been removed. A hedgerow of alternating white dogwood and redbud were planted for interesting bloom combinations. The lawns were interplanted with walking thyme for a lovely, aromatic effect.
The Italian garden (where croquet was played) was overlooked by the balustraded terrace adjoining the house. The Beals were always grateful to their considerate neighbors at Algonac who kept their trees topped ensuring their unspoiled view over the Hudson.

Towards the end of his life, Thaddeus Beal, "a notoriously bad driver," had a motor accident that left him with one leg three inches shorter than the other. Echo Lawn's staircase became an unassailable hinderance and the estate was subdivided when he built a single-story ranch house into which he moved. His son, John Wilkie Beal, moved into the main house and it remained with the Beals until 1957, when sold to Frederick Warmer.

Today, Matthew and Heidi Benson live on the 3-acre "horticultural paradise" that includes Echo Lawn's former outbuildings - the carriage house, the farm manager's house, the barn, milking parlor, stable and icehouse. Collectively, this part of the estate is now known as Stonegate Farm, named for the romantic, rough cut stone gateposts that the Beals built to mark the rear entrance to the estate. Sometime after the Beal family sold Echo Lawn in 1957, the main house was renamed "Villa Stonegate," and it too remains in private hands.

The Golden Flea: A Story of Obsession and Collecting By Michael Rips