Completed in 1852, for Warren Delano (1809-1898) and his wife Catherine Robbins Lyman (1825-1896). Before it was lost to fire in 1916, this was the childhood home of the indomitable Sara Ann Delano, mother of U.S. President Franklin Delano Roosevelt who was married here in 1880. Sara's father had made a fortune in the Opium trade with China and having rented Danskammer from Mrs Armstrong in 1849, two years later (1851) he purchased 60-acres from her, also on Danskammer Point, where he built this house, giving it the Algonquin name of "Algonac," meaning "hill and river"....
zoom_in 2 images 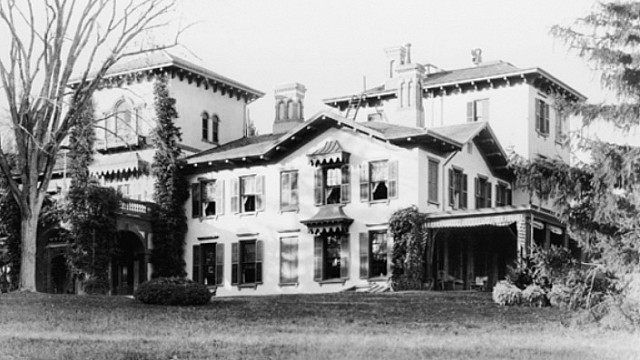 The original house was remodelled into an Italianate mansion by the noted architectural duo of Calvert Vaux and Andrew Jackson Downing. To disguise the additions, the house was covered in fawn-colored stucco, and the brick stable on the estate was a duplicate of the one they had built for Daniel Parish at his Newport estate, Beechwood. Internally, Vaux went to great pains to allow anyone coming from the second floor to enter any of the rooms on the first floor without having to pass through the main hall - filled with fine furniture and ornaments collected by Delano during his travels in the Far East - as he put it, "to add much to the privacy of the inmates of any country house".

A contemporary description of the grounds recounted that, "on the lawns Mr Delano and Mr Downing had planted spruces, hemlocks and pines for the winter, oaks and beeches and maples and exotic trees and flowering shrubs from China for the other seasons". It was situated next door to the Echo Lawn estate, the boundary of which was marked by a small stream. On the Delano side was a statue of Pan in a bed of myrtle and forget-me-nots, and at a later date when Echo Lawn was owned by the Beal family, a rustic bridge was built connecting the two estates and a "a great party celebrated this union".

Algonac was one of the most impressive of the Hudson Valley estates, but was consumed by fire in 1916. The grounds have since been developed and in regards to the current status of what remains of the house I am grateful to the insight provided by Bruce Knox and Steven Baltsas (see their comments below). "Vague parts" of the house - notably the porte-cochere - that survived the fire have been resurrected and given a new lease of life.

The Architecture of Country Houses By A.J. Downing