Built in 1853, for Andrew Robeson (1817-1874), and his wife, Mary Arnold Allen (1819-1903). The Italianate house stands on Bellevue Avenue across from Bowery Lane within its own, "spacious and picturesque grounds". It was designed by George Champlin Mason Sr. for Robeson who was the son of a Quaker abolitionist from New Bedford and made his fortune through whaling, banking and calico printing. The Robeson's granddaughter, Henrietta, married the architect Guy Lowell. Elm Court remains a private home and is still lived in by the same family who've owned since 1896....
zoom_in 2 images 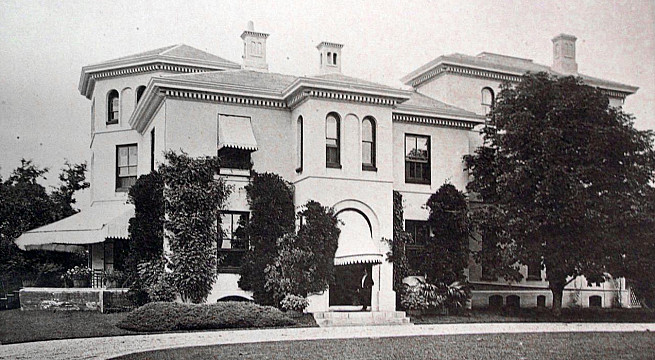 After Robeson died in 1874, it was acquired circa 1875 by Adele who was then Mrs Frederick W. Stevens. In 1882, she had McKim, Mead & White remodel and enlarge the house at a cost of $16,591 with the interiors redone by Ogden Codman Jr. - the same who collaborated with Edith Wharton on their landmark book The Decoration of Houses.

Adele's villa was described as, "one of the most luxurious in appointment and decoration, and was noted for the entertainments there given". One such party hosted by the Stevens took place in 1880 or 1881: "a ball was given there which surpassed in magnificence any former entertainment held in the fashionable watering place. The supper room was cooled by tons of ice arranged in a pyramid, at the rear of which calcium colored lights were placed, which, shining through the crystal mass, produced a rarely beautiful effect".

Just a year or two later, in 1882 Adele ditched her husband and hot-footed it to Paris to be with the Marquis de Talleyrand (himself then married to another American, Bessie Curtis) to whom - after their sensational divorces - she was married in 1887. From about the same time she rented out her villa to various high profile names for $6,000 a season at a time when most other villas in Newport were going for between $500 and $2,500. She did return to Newport in 1887 but society gave her the cold shoulder and she never returned.

Frank Work and the Carys

Adele eventually sold the property in 1893 for $87,500 to Christoper R. Robert and his wife, Julia. Just three years later (1896), Julia sold the house (then called "The Elms") and its contents for $115,000 to Frank Work - the personal stockbroker of "the Commodore" Cornelius Vanderbilt and great-great grandfather of Princess Diana - who'd been renting the house from the Roberts' for the Newport season since 1893.

Frank Work passed the estate to his daughter, Frances, who'd recently divorced her errant first husband and moved back to America with her daughter, Cynthia. It passed next to Cynthia who was married here (for a description of their wedding day read the notes on the Cary House in Manhattan) to her second husband, Guy Fairfax Cary, and after he died in 1950 it ceased to be a summer home and became Cynthia's year-round home. Mrs Cary was a prominent art collector whose collection of over 200-rare books are now at the Redwood Library in Newport, removed from their Manhattan home 61 East 91st Street. She died in 1966 when the house passed to her daughter, Cynthia (Cary) Van Pelt Russell. It is currently home to Mrs Russell's younger son, Guy Van Pelt, and his wife, Mary.

A Newport Summer: Off Bellevue By Ruthie Sommers & Nick Mele

The Newport Experience: Sustaining Historic Preservation into the 21st Century By Jeannine Falino