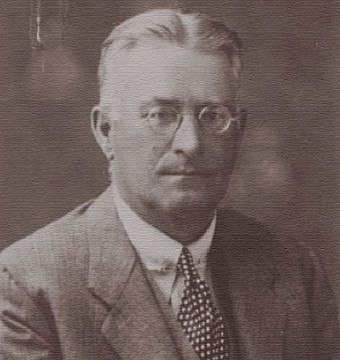 He was born in Boston, Massachusetts, a member of an old-monied American family. He was named for the family of his grandmother (daughter of U.S. Congressman David Ogden of New York) while his father's family had been among the most prominent in Boston's merchant circles since his great-great grandfather, John Codman (whose portrait by Copley hangs in the Boston Museum of Fine Arts), helped torch British tea in Charlestown Market. More relevantly, he was a nephew of the architect John Hubbard Sturgis who rejuvenated the old Codman house at Lincoln.

He grew up from 1873 at Dinard in Northern France where he received his early education. In 1884, he returned to America to study Beaux-Arts architecture at the Massachusetts Institute of Technology, becoming a proponent of English Georgian and 16th to 18th century French and Italian architecture. However, he was so disenchanted with his education at M.I.T. that 57-years later he requested his name be struck off the list of alumni. After "two dreary years" as an apprentice in Lowell, Massachusetts, he became attached to Andrews & Jacques in Boston and then set up on his account, relocating to New York in 1893 and opening an office in Newport where he met Edith Wharton.

His independent wealth and contacts allowed him to become something of a maverick, and his disinterest in conventional study saw him excluded from the usual professional listings and he was never invited to become a member of the American Institute of Architects. But his natural talent far outweighed his lack professional accreditations. He and Wharton worked together on Land's End while publishing (1897) their classic book on design, The Decoration of Houses, that focused on classic simplicity over Victorian clutter. Over the course of his career he worked on 22-mansions and his clients included the likes of Cornelius Vanderbilt II for whom he designed the second and third floor rooms at The Breakers, and John D. Rockefeller Jr., for the interiors at Kykuit.

In 1904, he married Leila Griswold, the widow of H. Walter Webb, Vice-President of the New York Central Railroad and brother-in-law of Eliza (Vanderbilt) Webb. She died six years later, not only leaving him her fortune, but also leaving him free to pursue the young men that were his sexual preference. He sold the house (15 East 51st Street) he designed for her when she was Mrs. Webb and built himself 7 East 96th Street in 1912. In 1918, he leased "Sans Souci" in Newport before leaving America permanently in 1920, spending the remaining 31-years of his life in France. There, he lived between the Château de Grégy near Paris which bore a distinct resemblance to the Villa Leopolda that he built for himself in the South of France. Although he ran out of money on the Leopolda project and had to rent it out, the house and its 50-acre estate is now touted as the most expensive private residence in Europe at $750-million. He died without children.

The Decoration of Houses By Edith Wharton & Ogden Codman