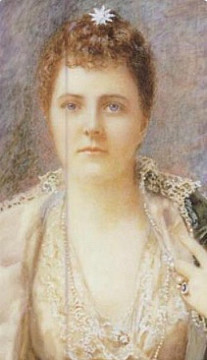 She is the great-grandmother of both Diana, Princess of Wales, and the actor, Oliver Platt. "Fanny" was the daughter of Frank Work who came from Ohio to New York as a teenager and orchestrated a "chance" meeting with Cornelius Vanderbilt (1794-1877) that led him to become his personal stockbroker. Fanny, "a great beauty in her youth," grew up at the since demolished family home 13 East 26th Street off Madison Square with summers spent rubbing shoulders with the Vanderbilts at Newport.

Fanny enjoyed all the trappings of being rich and beautiful in the Gilded Age. She was a regular at society parties in New York and Newport and frequently turned heads wearing the latest fashions. But, there was more to her than that: she was also very well read, fluent in French, and had a remarkable knowledge of art and furniture. She was also headstrong, so when the handsome James Burke Roche - the son of an Irish Lord with empty pockets but ladles of charm - proposed, she ignored her father's angry remonstrations and married him anyway. Her father did not mince his words:

I am an American to my backbone... I have only contempt for these helpless, hopeless, lifeless men that cross the ocean to carry off the very flower of our womanhood... If I had anything to say about the matter I'd make international marriage a hanging offence!
Between graduating from Trinity College, Cambridge, and coming to America, Jim Roche had been, "a revolutionist in South America, a gold miner in Alaska, an explorer in Patagonia, and a blockade runner during the Russo-Japanese war". He came to America with Morton Frewen (1853-1924), the epitome of the "helpless, hopeless, lifeless men" so despised by Fanny's father, and who was nicknamed "Mortal Ruin" by his own family as he lurched from one ruinous business idea to another! The dashing, inept young men equipped themselves as cowboys and rode off to Wyoming where they did their best to operate a cattle ranch while, "enjoying the occasional tussle with hostile Indians"!

Unsurprisingly, the venture failed, and our two hapless heroes galloped back into society,  donning their finest suits for what would prove to be the most lucrative of their ventures: bagging an heiress. Months after Jim married Fanny, "Mortal Ruin" put a ring on the finger of Clara Jerome, the elder sister of Jennie Jerome and Winston Churchill's aunt.

Fanny and Jim were married in September, 1880, and though not disinherited altogether, Fanny's allowance was reduced to $7,000 a year which was still $7,000 a year more than her husband could provide! Through gritted teeth, Frank paid off Jim's gambling debts of $50,000 before the young couple left for London where, "being an accomplished woman, a brilliant talker, and a beauty, (Fanny) made her way to the front ranks".

They divided their time between London and Ireland, returning to Jim's childhood home, Trabolgan, where two of their children were born. But, it very quickly transpired that Jim was not just a gambler, he was a compulsive gambler, and even worse, a womanizer. After Jim burned his way through $100,000 he didn't have in just one year, Frank paid up for the last time and in his own words, "stopped pouring money down a rat hole".

In 1886, after just six years of marriage, their house in London was stripped bare by bailiffs and Fanny finally saw the light, returning to New York with her daughter - Jim had refused to let her take their twin boys. Back home, she was again reinstated into her father's will and started divorce proceedings - a lengthy procedure as American divorces were not then recognized in England. But, Jim's nose soon caught wind that she was back in the money and bringing the boys as bargaining chips arrived in New York to abstract still more. Unsuccessful, he unceremoniously dumped the boys on the front doorstep of their grandfather's house, and left! Fanny was granted a "Delaware" divorce in 1891, but throughout Jim - and even his mother - had not let up. Her father was exasperated:

I have supported that man until I had to decline to pay his debts. He wrote to me himself. He begged me to come to his assistance. He asked me to save him from bankruptcy... I deemed it wrong to assist him further after his wife and children had come to this country... I have letters from his mother where she begs me to save her son.

Life resumed much as it had done before her marriage, but Fanny soon famously complained that it was very hard to make ends meet on an allowance of only $60,000 a year...! Disagreements over money led her to move out of her father's house in New York and down to Two-Mile Corner Farm (a previous present from Daddy, of course!) at Middletown, two miles from Newport, where she was developing a stable of horses. This was close to Elm Court where she had played hostess on behalf of her father since 1896.

It was Fanny's passion for all things equine that led her to take lessons to drive a four-in-hand carriage - in fact she became the first woman to drive a four-in-hand through Central Park. Her instructor was the younger, swarthy professional whip from Hungary who went by the name of Aurel Batonyi. According to him, his parents spent most of their time in Monte Carlo and aside from vast estates, the family owned over 100 racehorses and his mother had the largest collection of emeralds in Europe! The other story was that he was in fact plain old Arthur Kohn and the riding school to which he was attached thought the more exotic "Aurel Batonyi" would be a better name suited for their clientele!

At the age 87, Fanny's beleaguered old Dad once more faced the journalists at his door when news broke in 1906 that Frances had married Batonyi in secret the previous year and were thought to be in Europe. In what was the 13th codicil to his will concerning his troublesome daughter, Frank cut her out entirely, saying "she is nothing more to me," and as an added sting to the tail he immediately placed Elm Court on the market too.

This time things were different: Fanny returned to her farm at Newport but aside from a handful of the equine set (Alfred Vanderbilt included), Aurel was not accepted by society and she was blanked by former friends. Despite Aurel's claims to great wealth, it did not appear to be forthcoming and Fanny being Fanny, she could only last so long without money. It was over by the following year. Aurel's attempt to sue his would-be father-in-law to the tune of $1.5 million, for "alienating his wife's affections," before lashing out at his wife and attempting to counter-sue her for adultery all came to nothing. In October, 1907, Aurel was dispatched with a one-way ticket - and as rumor has it, a handsome pay-off - on the Kaiser Wilhelm II, before disappearing from the history books without a trace.

Divorced, again, and safely back on American soil, Frank took Elm Court (still owned by their descendants today) off the market and with the 15th and final codicil to his will, Fanny was once again made a fully fledged beneficiary to her father's $14 million fortune.

Depending on which account you read, Fanny either never quite regained her social standing, or she had a grand old time between New York, Newport and Paris - though being careful to stay well clear of marriage! She retained Elm Court and later bought an apartment at 1020 Fifth Avenue where she died at the ripe old age of ninety. She is best remembered as the great-grandmother of Diana Frances (Spencer), Princess of Wales.