Built 1787, for Benjamin Stoddert (1744-1813), tobacco merchant and 1st U.S. Secretary of the Navy. From 1900, the front was remodelled beyond recognition by the eccentric Albert Adsit Clemons (1872-1938) who believed he would live longer as long as he kept working on it! His surname is often misspelt "Clemens" and he is frequently referred to as a nephew of Mark Twain, but the claim is fictitious - they were not even distant relations. Halycon was purchased in 2011 by the biochemists and philanthropists Dr. Sachiko Kuno and Dr. Ryuji Ueno (who also own Evermay in Georgetown) as the headquarters for the Halcyon, a non-profit for creatives.
zoom_in 3 images 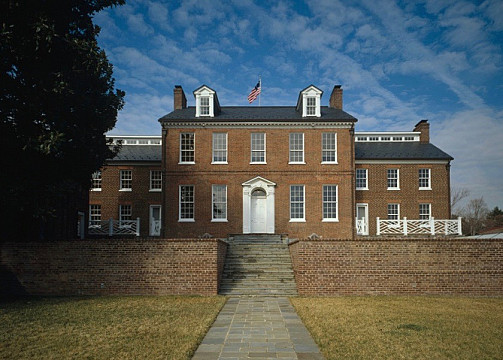 Stoddert built his 30,000 square foot mansion overlooking the Potomac and employed Pierre L'Enfant to design the gardens. He named his home Halycon, an ancient Greek word that both denoted an idyllic time in the past that was happy and peaceful, while also being the name given to a mythical bird capable of calming the wind and waves. As a tobacco merchant who depended on his produce surviving the ocean waves, it is believed that he therefore named his home for the latter.

In 1802, Stoddert's wife, Rebecca Lowndes (1757-1802), died. He then passed Halycon to their eldest child, Elizabeth Stoddert (1784-1859), who was married to Dr Thomas Ewell (1785-1826) and they lived there up until 1818. The house passed through several proceeding families and was purported to have been a safe house on the Underground Railroad before and during the Civil War, when escaped slaves travelled along the tunnel from the river up to the house.

John L. Kidwell (1820-1885) had purchased the house in 1859. Following his death in 1885, a family feud ensued over his will and the house sat empty for the most part and unsold for fifteen years. In 1900, Halycon, was finally sold to the extra-ordinary character, Alfred Clemons. He carried out extensive works, some useful and some not - several rooms were so small that not even a chair fitted, and many passageways and staircases led to nowhere! Most notably, he remodelled the front of the house as seen today.

In 1966, the house was purchased from Georgetown University for $275,000 by architect Edmund Woog Dreyfuss (1914-1982) as a business venture. But, though he rented the 12 apartments into which it had already been divided, he and his partners could never agree on how best to develop the historic mansion. To confound matters, Edmund was incapacitated by a stroke in 1978 and so the house came into the possession of his son, the noted sculptor John Dreyfuss. John and his wife lovingly restored it to how Stoddert had known it, while respecting Clemon's work and keeping his facade and among features.

In 2011, Halycon was sold to the biochemists and philanthropists Dr. Sachiko Kuno and Dr. Ryuji Ueno (who also bought Evermay in Georgetown) as the headquarters for the Halcyon, a non-profit for creatives.

Remembering Georgetown: A History of the Lost Port City By David Mould & Missy Loewe, Foreword by Jerry A. McCoy

Heroes of the Underground Railroad Around Washington, D.C. By Jenny Masur, Foreword by Stanley Harrold, author of Subversives: Antislavery Community in Washington, D.C., 1928-1965