Completed in 1895, as a summer home for Cornelius Vanderbilt II (1843-1899) and his wife Alice Claypoole Gwynne (1845-1934). Located on 13-acres on the cliffs overlooking the ocean, this elaborate Italian Renaissance mansion perhaps more than any other typifies the Gilded Age and is regarded as the grandest of Newport's Cottages. It is the 21st Largest House in the United States, fractionally ahead of Lynnewood Hall and a hair's breadth behind the recently extended Mar-a-Lago. It contains 70 rooms (33 for servants) over five stories and occupies 62,482 square feet. The grounds and mansion are open to the public year-round, except for the third floor, which is still occupied by the Vanderbilt's decendants. As the iconic cottage of Newport and one of the most recognizable houses on the continent, it attracts 400,000 visitors annually...
zoom_in 11 images 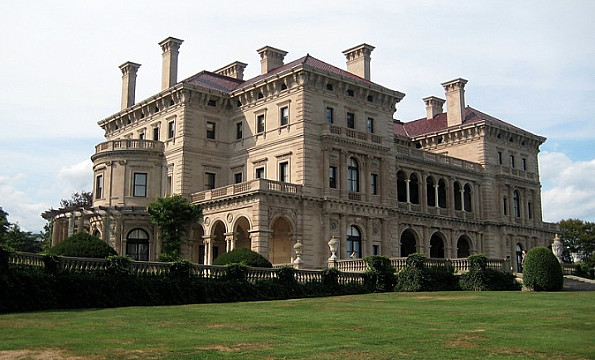 The first mansion built on this site - from which this one takes its name - was The Breakers, built in 1878 for the tobacco heir/magnate Pierre Lorillard IV (1833-1901) whose first cousin built Vinland next door. In 1885, the Lorillards sold their rambling, Queen Anne-style seaside residence to Cornelius Vanderbilt II - grandson of the founder of the family's fortune - who rehired the original architects and made several improvements.

In 1892, a fire tore through the not-so-old Breakers and Vanderbilt contacted his family's go-to architect, Richard Morris Hunt (1827-1895), to build him a two story villa of fireproof Indiana limestone. It sounded as modest as it might do for a man who started his career as a bank clerk on $50-a-year and married a girl he'd met while they both taught Sunday school. But, Cornelius Vanderbilt wasn't just anyone. He was the hard-working head of the Vanderbilt family and very soon the original plans for his new home were scrapped for what we see today: a quasi-palace rather than a shoes-off, seaside getaway!

In the same year that fire had torn through Cornelius' Newport home, he watched his younger brother unveil Marble House - another of Hunt's masterpieces and the first of Newport's truly palatial mansions. Cornelius was of course the most senior member of the Vanderbilt clan and it is therefore more than likely that he felt it was both his birthright and his duty to now surpass his younger brother's showpiece. In discussing the Vanderbilt family's propensity for mansion-building, the author Louis Auchincloss (whose wife was was a great-granddaughter of Cornelius' sister, Emily) surmised:

I can only suppose that they really believed that it was the duty of leaders of society to entertain according to the fashions of the day. It was not enough to go regularly to church, to give generously to the poor, to maintain the strictest moral standards and set an example in one’s speech and decorum. No, one had to provide some bread and circuses, too, not necessarily for the mob, but for the “society,” a group presumably made up of the community’s responsible leaders.

Hunt furnished the Vanderbilts with plans for several mansions of varying styles until they settled on this one in the Italian Renaissance. While travelling in Genoa, Hunt had purchased Peter Paul Rubens' book Palazzi di Genova (1622). It was through these predominantly 16th century palaces that Hunt was able to reproduce so many of the finer architectural details with such accuracy, but he took his principal inspiration from one in particular: the Palazzo Doria-Tursi on the famous Via Garibaldi in Genoa, built in 1565 for one of the all-powerful Grimaldi family. Sadly for Hunt, he died three weeks before the house-warming party for 300 guests was held at what was his finest achievement.

Marble, alabaster, rare stone, rare woods, tapestries, mosaics, panelling and further architectural elements were imported on a vast scale from Europe and Africa for the famously lavish Beaux-Arts interior. Construction was estimated to have cost $5 million and every detail was completed almost entirely by hand; and, it took just two years, having been swarmed on by a small army of international artisans all gathered together by Hunt.

On the interiors, Hunt was assisted by Edith Wharton's friend and collaborator Ogden Codman, Jr. (1863-1951), who designed the elegantly simple family quarters on the upper floors, panelled in ivory-colored wood with silken fabrics featuring figurines. Jules Allard (1859-1945) & Sons of Paris took charge of the furnishings and fixtures; and, Karl Theodore Francis Bitter (1867-1915) oversaw the sculptural reliefs.

The most ornate and luxurious rooms are found on the 24,000 square foot ground floor, including a small reception room with delicate ornamental panels originally fitted at a house in Paris for Queen Marie-Antoinette (1755-1793). Among the too-numerous-to-mention architectural features is the central hall, 45-feet in height, upon which the main rooms are centered.

The Music Room was where their daughter, the sculptor Gertrude Vanderbilt (1875-1942), was married to Harry Payne Whitney (1872-1930). The entire room, down to the gilding, painted ceiling and furniture, was designed by a French architect and crafted by French cabinet-makers. They shipped it over in parts to Newport before its reconstruction was overseen by a team of French artisans who were also shipped over especially!

The library is panelled in walnut and stamped with gold and gold-embossed rectangles of Spanish leather with a 16th century fireplace from the Chateau d'Arnay-le-Duc in France. Said to be the grandest room, the dining room is 58-feet in length, standing over two stories high with 12 alabaster columns and a massive oak table for 34 guests. Another nod to its overall unparalleled grandeur was it water supply: guests could have their baths poured, not only hot or cold, but with a choice of fresh rain-water or fresh seawater! Thomas Gannon said, "if the Gilded Age were to be summed up by a single house, that house would have to be The Breakers".

Entrance to the 13-acre estate is made through sculpted iron gates on Ochre Point Avenue via a driveway lined with mature pine oaks and red maples. The portion of the estate that lines the street is protected by a limestone wall, the borders of which are planted with rhododendron, mountain laurel, dogwoods etc. The grounds were designed by Ernest Bowditch with rare trees that include the North African Blue Atlas Cedar, weeping willows and coppers to act as a shield from which to hide the estate from its neighbours. Manicured hedges of Japanese yew and Pfitzer juniper shade the footpaths that meander throughout the grounds and the grand terrace to the rear of the house is surrounded by Japanese yew, Chinese juniper, and dwarf hemlock.

The Lucky Few to call this "Home"

Vanderbilt died at a relatively early age in 1899 and his widow, Alice, retained the mansion as her summer house until her own death in 1934. She left the estate to their youngest child, Gladys Vanderbilt (1886-1965), who married Hungary's first Minister to the United States, Count László Széchenyi de Sárvár-Felsővidék (1879-1938) - pronounced Lazlo Say-Chay-Nee. Gladys had always been particularly attached to The Breakers and was the only one of her siblings to take a real interest in it. In 1948, Gladys had been widowed for ten years when she made an arrangement to lease The Breakers to the Preservation Society of Newport County for $1 a year, while retaining the third floor for her own private use.

Gladys died in 1965 and The Breakers passed to her fourth daughter, Sylvia Széchenyi (1918-1998), the wife of Count Antal Szapáry (1905-1972) - pronounced Sa-Par-ee When her husband died in 1972, Countess Szapáry sold the The Breakers and roughly 90% of the furnishings to the Preservation Society for $365,000. But, as her mother had done before her, she made an arrangement to maintain the third floor where she spent a good portion of each summer.

Like many other grand old dames in Newport, the press referred to the Countess Szapary as, "the doyenne of Newport Society" up until her death in 1998. But, unlike others who were given that sobriquet, by title and abode, she had no rivals in Newport. The third floor remains closed to the public as Sylvia's surviving family continue to make use of it today as per an agreement with the Preservation Society.