Completed in 1926, for Mrs Eleanor Elkins (Widener) Dixon (1891-1966) and her husband, Fitz Eugene Dixon (1888-1982). They replaced Ogontz with this 60-room, Tudor-Revival mansion. It incorporated Dixon's spectacular collection - the finest private collection in America - of English, Dutch and Flemish Heraldic stained-glass windows dating from the 14th to the 16th centuries. In both style, distinction and fate, it closely resembled the other great American Tudor-Revival mansion, Inisfada. Despite the best efforts of preservationists, this beautiful, intricate museum-piece was demolished in 1974. However, some of the windows were salvaged and can be seen today on display at the Philadelphia Museum of Art, while some of the Trumbauer-designed outbuildings on the estate have been converted into beautiful 21st century family homes.
zoom_in 15 images 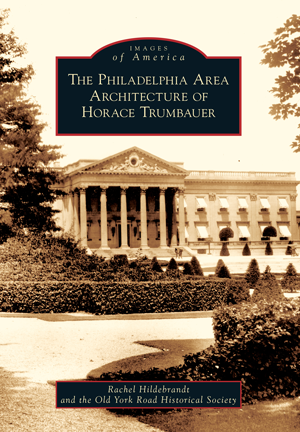 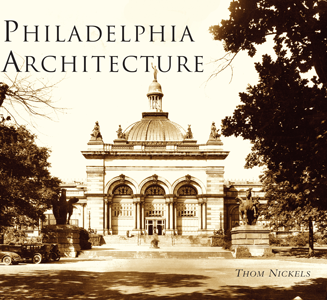 Philadelphia Architecture By Thom Nickels
In 1915, Joseph Early Widener (1871-1943) expanded the Lynnewood Hall estate by purchasing the 380-acres of adjoining land on which Ogontz stood, erected some fifty years previously for the legendary financier Jay Cooke (1821-1905). The following year, Widener gifted the old mansion and 114 of its surrounding acres to his niece, Eleanor, who since her marriage in 1912 had been living at Kulp House on City & Ogontz Avenues.

Eleanor was an heiress who'd lost both her father and her brother on the Titanic. Her husband, Eugene, was a banker and former Davis Cup captain. Though they lived at Kulp House for 12 years, they spent that time planning their new mansion. Tearing down Cooke's late 19th century showpiece, Ogontz, the Dixons replaced it with an English Tudor-Revival manor that they named "Ronaele" which is "Eleanor" spelt backwards. In her own words, Eleanor had set out to build a house, "less palatial than either Miramar or Lynnewood Hall, but equally impressive in its own right". She succeeded.

Designed by the Widener family's architect of choice, Horace Trumbauer (1868-1938), the Dixon's 60-room mansion was inspired by one of England's finest examples of late 15th century Tudor architecture, Compton Wynyates, in Warwickshire.

Spread out over differing levels and reaching three stories in places, the slate roof was interspersed with 28 chimneys marked by their own unique brickwork design and motif. The 173-foot long mansion was built of bricks with varying hues of color that were laid out in patterns concurrent with original Tudor style; and, in keeping with that period the door and projecting window frames were made of limestone. Mr Dixon was a scion of an old and notable Scottish family and above the main entrance door made of oak, 4-inches thick (believed to have been carved from choir stalls found in an English monastery), Trumbauer incorporated the Dixon coat-of-arms and motto, "Fortune Favours the Bold".

The mansion's interiors were designed by Charles Joel Duveen (1871-1940). In keeping with the English Tudor theme, some of the wooden panelled rooms were similar to those found at Rough Point, another Tudor-style mansion designed by Trumbauer in Newport.

Many of the rooms featured antique-panelling and the panelling found in the living room had been removed from a hunting lodge belonging to King James I (1566-1625) of England. The most striking feature was said to be the Tudor staircase - similar in style to originals found at Blickling Hall and Hatfield House - the landing of which was lit by a two-tiered brass chandelier. Though built as an ancient home, the house contained modern amenities by way of 13 bathrooms, an elevator and an indoor badminton court. The Dixons employed a domestic staff of 24, and many more on the estate.

Mr Dixon was a passionate collector of heraldic stained-glass windows found in the ancient manors of England. His collection included those (to mention just a handful) from Windsor Castle, Herstmonceux Castle, Wroxton Abbey and Costessey Hall. Every room in Ronaele was fitted with panes from his unrivalled collection and 66 of them can still be seen today at the Philadelphia Museum of Art.

Ronaele incorporated 93 of Dixon's stained-glass windows that dated mainly from the 14th, 15th and 16th centuries and included the arms of several Plantagenet and Tudor Kings of England. It was the finest private collection of it's kind in America and in 1927 a book was published with detailed illustrations: "The Collection of Heraldic Stained Glass at Ronaele Manor, Elkins Park, Pennsylvania" by Frederick Sydney Eden.

As passionate as Mr Dixon was for his heraldic stained glass, Mrs Dixon was just as passionate a horticulturalist. The greenhouses at Ronaele were extensive and contained a collection of over 200 varieties of orchids, including Mrs Dixon's own hybrid Dendrobium Ronaele, cultivated here and named for the mansion in 1935.

The estate incorporated a cattle farm and there were numerous outbuildings including a tea house, 8-room butler's cottage, garage and servant's quarters, all designed by Trumbauer. Aside from the greenhouses, there was also a swimming pool - out of sight but in comfortable proximity to the house - tennis courts and an indoor badminton court.

The Dixons were married at Lynnewood Hall just months after Eleanor lost her father and brother on the Titanic. They later divorced but Mrs Dixon continued to reside at Ronaele with her two children. Her daughter, Eleanor Widener Dixon (1914-1967), married and moved out in 1937, but her son, Fitz Eugene Dixon Jr. (1923-2006), heir to the Widener fortune of some $400 million and a noted philanthropist, remained with her.

In 1949, convenience necessitated that the Dixons move to Homewood on Chestnut Hill. On moving, they took with them the living room fireplace and 16th century panelling that was refitted into Homewood. The following year, Mrs Dixon sold Ronaele Manor to the Christian Brothers of La Salle College. They used the mansion to house members of their institute who were studying in the Philadelphia area, renaming it Anselm Hall.

In 1973, the Brothers removed many of Ronaele's interior features for display at the La Salle University Art Museum before selling the property for development. After a spirited battle by local preservationists - and despite it having been declared an historic site - the mansion was unceremoniously torn down in 1974 and the land built upon. Several of the Trumbauer-designed outbuildings survive, including the five-bedroom Pheasant Run.