Completed in 1891, for Joseph Francis Sinnott (1837-1906) and his wife, Annie Eliza Rogers (1842-1918). This Gothic spectacular that the Sinnotts named "Rathalla" covers 27,712 square feet and is distinguished by its 52 stunningly carved gargoyles and "grotesques" that would make it worthy of any Harry Potter film set. It was not lost on the aspiring, young architects who designed this elaborate castle that their work would be in full view of all those travelling along the Main Line of the Pennsylvania Railroad. Today, it is home to Rosemont College in Lower Merion and Radnor Townships...
zoom_in 8 images 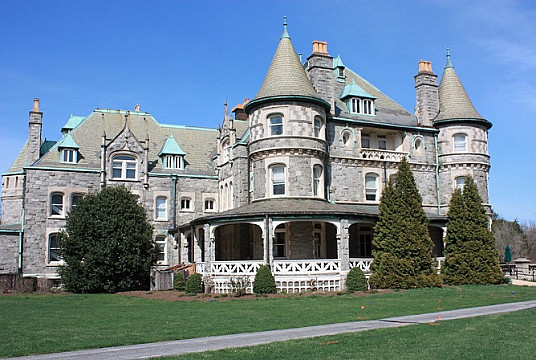 Joseph F. Sinnott was born to a devout Catholic family in Ireland that had taken up with the insurgents during the Rebellion of 1798. Subsequently, several of his family emigrated to America which led to his arrival in Philadelphia in 1854. Having started life as an assistant book-keeper with John Gibson's & Son, distillers, he eventually took co-ownership of the firm that was renamed Moore & Sinnott before becoming its sole proprietor in 1888. His distillery was the largest producer of rye whiskey in the United States and his reputation saw him made a trustee of the Philadelphia & Reading Railroad and a director of the First National Bank etc. He died leaving a fortune of $2.2 million.

The Sinnotts kept a townhouse at 1816 Rittenhouse Square but on becoming the sole owner of America's largest whiskey distillery, Joseph's mind turned towards building a country estate on the Main Line to reflect his success. In 1889, he purchased the 37-acre Rosemont Farm, formerly part of the Ashbridge House estate which then belonged to Mrs Rebecca Ashbridge (1814-1891) and is now known as Ashbridge Memorial Park.

In the same year that he purchased the land, Joseph employed the aspiring young architects Edward Hazlehurst (1853-1915) and Samuel Huckel Jr. (1858-1917) of Philadelphia to build his 32-room mansion covering 27,712 square feet. The press quickly took interest and plans for its construction were reported in the Philadelphia Inquirer:

Mr Sinnott will spare no pains or expense in the construction... Every known modern convenience will be supplied throughout the house, and the building alone will cost $150,000... The entrance to the mansion will be very imposing... From the gravel walk a flight of stone steps will lead up to a terrace of stone with an ornamental front.
Completed in 1891, the architects captured the fashion at that time for building French chateaux inspired by those in the Loire Valley. Like the McGill House (1891) in Chicago and Ochre Court (1892) in Newport, Sinnott's was inspired by the likes of the Palais Jacques-Coeur and the Chateau de Chambord made popular by the Vanderbilt family's architect of choice, Richard Morris Hunt (1827-1895). But, with its rough-cut graystone exterior and typically Victorian detail, Sinnott's castle has a distinctly Scots Baronial feel.

Situated on a small hill overlooking the estate, Joseph christened his new country seat (somewhat immodestly) 'Rathalla' which is Gaelic for "home of the chieftain upon the highest hill". Despite its Irish name, Sinnott's castle certainly wouldn't look out of place in Scotland or as a backdrop to any Harry Potter film. But, aside from its array of hipped roofs, conical turrets, hexagonal towers and the 100 double-hung sash windows, it is particularly noted for its gargoyles and "grotesques" that leer out from various perches, parapets, corners and balconies of the otherwise graystone and marble-trimmed exterior.

Including the gargoyles that watch over the main entrance there are 52 "grotesques" all carved from limestone but each one unique and designed to mimic family and friends of the Sinnotts: some grin, some cower, some cover their eyes and some stick their tongues out lewdly, but all are visible from whichever angle the castle is viewed. The other prominent feature interwoven across the castle's exterior is the letter "S" for "Sinnott" and the Sinnott family crest. Often overlooked are the tiles leading up to the main entrance that have been laid out to the design of the Sinnott family's coat-of-arms.

Inside, the artistry and imagination continues: each one of the castle's 17 fireplaces are unique and one in particular features carvings of all 26 characters from Chaucer's "Canterbury Tales". All the rooms on the ground floor stem off from the central hall that rises up the full three stories of the castle, crowned by a stained glass skylight.

The 8-foot wide, hand-carved oak staircase leads up to the second floor over which a stained glass window depicts the Sinnott family coat-of-arms with the motto: "Am a Deum et Serva Mandala" ("Give God Your Love and Do What He Asks of You"). However, the Sinnott family motto - as the family well knew - is in fact "Sine Macula" ("Without Blemish") which gives rise to the question: was the motto changed by the nuns after 1921?

The Irish passion for horses is no secret, and Sinnott was a true Irishman. He spent $25,000 on the carriage house which was described in its day as: "the most complete in its appointments of any in which fine horseflesh is well cared for". A grandson recalled, "it was huge, the carriage room was upstairs and they took the carriages up on the elevator".

Joseph died in 1906 leaving Rathalla to his wife for the remainder of her lifetime after which he directed that it was to be sold by his executors with the proceeds to be divided between his children. Waited on by seven live-in servants, Mrs Sinnott survived her husband until 1918. In the immediate years following her death, one of their grandchildren hinted that the executors of the estate may have been guilty of embezzlement: "my grandfather had money, but none of the (heirs) were making that much". Then, the real death knell came to the family fortune in 1920 when America was hit by Prohibition.

Joseph Sinnott had always maintained a close association with the Catholic Church in Philadelphia. Among other similar organizations, he was a member of the Catholic Historical Society, the St. Charles Borromeo Theological Seminary, St. John's Orphan Asylum and St. Francis' Industrial Home, etc. His wife had in fact started life as a Quaker but she became a staunch Catholic, described  as "very, very religious". It was then perhaps no surprise when Joseph's executors sold Rathalla in 1921 to the Sisters of the Holy Child of Jesus for $250,000, seeing the billiard room become a chapel.

In 1927, the Sisters sold the mansion for $1 to the newly established Rosemont College, a liberal Catholic arts college for women (men were also allowed from 2009) that continues today and counts among its alumni JFK' sister, Patricia (Kennedy) Lawford. Rooms have changed purpose and four of the original six carved ceilings on the ground floor have gone, but essentially the floor plan remains unchanged. Rathalla sits at the heart of Rosemont's campus and is still filled with period furniture that gives it a continued air of dignity and antiquity.

Gargoyles & Grotesques By A. Raguenet

Scots Baronial Mansions and Castle Restorations in the West of Scotland By Michael C. Davis

The Canterbury Tales By Geoffrey Chaucer

Last Call: The Rise and Fall of Prohibition By Daniel Okrent

The Hidden History of the Main Line: From Philadelphia to Malvern By Mark E. Dixon