Built from 1865 for the widowed Liberty Preston (1798-1882), Justice of the Peace and Postmaster of Roxbury, when it started life as "a simple 7-room home". His wife, Betsey Taylor More, was a first cousin of Jay Gould who grew up at the nearby Gould Homestead and became one of the richest - and most reviled - men in America. In 1893, the Preston property was purchased as a summer home by Jay's daughter, Helen Miller Gould (1868-1938) who was later married to Finley Johnson Shepard (1867-1942). Its situation under a hill resembled a scene from the Highlands of Scotland and Helen named her new home "Kirkside" - "Kirk" being the Scottish name for a church and because it stood to the side of the Jay Gould Reformed Church....
zoom_in 2 images 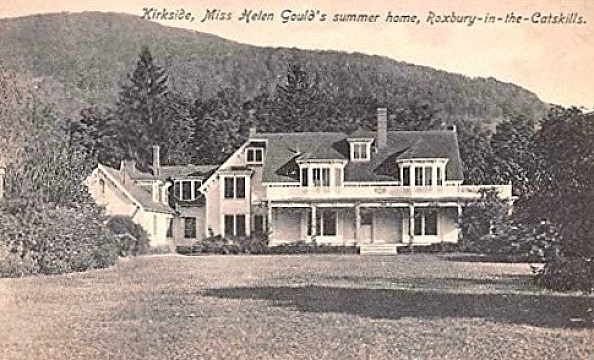 The church at Roxbury was founded in 1802, and the stone edifice seen today was preceded by three wooden-frame churches. The first two were destroyed by wind and the third burned. At that point, Jay Gould - who joined the church here in 1840 - proposed a stone building, but died before a site could be found. In 1894, his children saw the present marble church completed, naming it the Jay Gould Memorial Reform Church. Despite Jay Gould's public reputation as the most reviled man in America, in his private life he was as devoted to his children as they were to him. Perhaps to make good his many wrongs, Helen devoted her life to charity, spending over two-thirds of her fortune on good causes.

Helen was well-known for her charity, and just as her father had died with the reputation of being the most hated man in America, she died - according to The New York Times - with the reputation of being, "the best-beloved woman in the country". To mention a few of the gifts she bestowed upon the people of Roxbury: In 1903, she built a gas plant for the village large enough to supply gas for every street, business place, and home; in 1904, she paid the $4,000 the villagers were unable to afford to have Roxbury connected to the state road system with a new tarmac road; and, in 1911 she bought the 10-acre Dales Lake that was then connected to the existing supply to give Roxbury an unfailing supply of water.

In April, 1894, Miss Helen Gould - as she was then - was busy in Roxbury overseeing the final interior touches to the church shortly to be dedicated to her father, while at the same time putting her head around the next door property to check on the improvements being made to her new summer cottage, Kirkside.

Her summer home stood on 11-acres and in the early 1900s she employed the same landscape architect she'd used to improve the gardens at Lyndhurst - Ferdinand Mangold - to put his magic touch to work here. Amid, "a horticultural wonderland" of native plantings plus other specimens brought over from Lyndhurst, he laid out winding paths along the river with two Adirondack-style rustic bridges, a small island, and a rustic gazebo. In 1914, she increased the estate to 14-acres, significantly enlarging the house to its present appearance and adding a 9-hole golf course which is now the Shepard Hills Golf Course. She frequently leant her gardens and grounds to the villagers for public functions.

Helen died at Kirkside in 1938, when it was valued at $42,026. 300 people filled the church for her funeral here and a further 1,500 attended her memorial service in New York City. Her husband, Finley J. Shepard, and their children still occasionally made use of Kirkside until 1949. That year, it was announced that the Helen Gould Memorial Fund was donating Kirkside to the Dutch Reformed Church in America for use as a home for old-age ministers, their wives, and other church workers. Unfortunately, though the home was well attended to, the gardens were not: the paths grew wild with weeds and where there had been beautiful rustic bridges were now decidedly un-beautiful rusted-iron bridges.

In 1980, the park was saved from development by a civic committee and in 1999 the Town of Roxbury restored the parkland to its original, rustic splendor. Helen's old summer house is still called Kirkside and remains a nursing home for senior adults; and, the church is still popular with the extended Gould family who come up to be married.

Women of the Catskills: Stories of Struggle, Sacrifice & Hope By Richard Heppner

A History of Delaware County, New York: A Catskill Land and Its People, 1797-2007 By Tim Dureden

The Catskills: Its History and How It Changed America By Stephen M. Silverman & Raphael D. Silver

The Catskills: A Photographic Portrait By Michael P. Gadomski