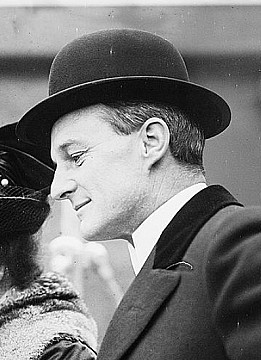 He was born at Saybrook, Connecticut, and educated at the Seabury Institute, Saybrook. He entered the railroad business working for the Northern Pacific at St. Paul, Minnesota (1889 to 1891) and the Atchison, Topeka & Sante Fe  at Los Angeles (1901 to 1905). He was Superintendent of the Santa Fe Coast Lines at Los Angeles. From 1905, he went into business on his own account in Chicago, but returned to the railroads in 1911 on being appointed a senior executive of the Missouri Pacific at St. Louis. The following year he was transferred to their offices in New York as the assistant to B.F. Bush, the President of the Missouri. After his marriage in 1913, he became a director of the Manhattan Electric Railway and the Interborough Rapid Transport Company. He was also a director of the Merchant's Fire Assurance Corporation, the Simms Petroleum Company, the Texas & Pacific Railway and the Ampere Band & Trust Company.

In 1913, he was married at Lyndhurst to Helen Miller Gould, the philanthropic daughter of the former President of the Missouri Pacific Railroad, Jay Gould. They lived between 579 Fifth Avenue in Manhattan; Lyndhurst in Tarrytown; and, Helen's summer home at Roxbury, Kirkside. They were both devout Christians and he faithfully assisted in his wife's philanthropy which included establishing welfare for railroad workers; religious institutions; engineering schools, libraries; recreation homes; and, the Hall of Fame at New York University. They adopted four children: (1) Finley Jr. (2) Helen, Mrs Gaines, Burton, Koch, then Mrs Happersberg; and, (3) Olivia, Mrs Burr, then Perry (4) Louis. After his wife died in 1938, Finley (by then almost completely blind) retired to Lyndhurst where despite his impaired eyesight, his greatest pleasure was still to play the huge pipe organ.