Built from circa 1792, for Abraham Gould (1766-1823) and his wife, Anna Osborn (1764-1847). It is best recognized today as the birthplace and childhood home of their grandson, Jay Gould, who became one of the richest but most reviled men in America. The Gould house stood on an "unproductive" 150-acre dairy farm leased from the Hardenburgh Patent. Jay left Roxbury in 1856 for New York City via Pennsylvania and though he may not have missed it, it was not coincidental that two of his children returned and built summer homes in the same region: In 1890, George Jay Gould built Furlough Lodge, which still remains in the Gould family today; and, Mrs Helen Gould Shepard summered at Kirkside in Roxbury, next to the Jay Gould Memorial Church....
zoom_in 2 images 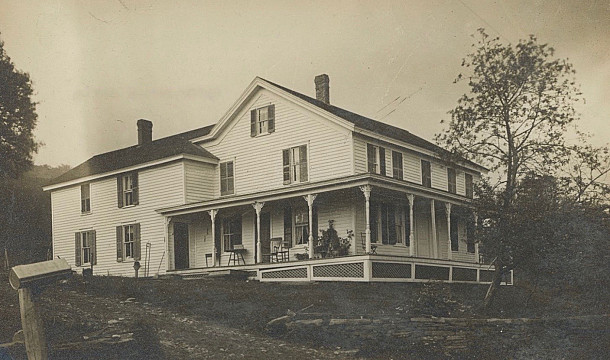 Abraham was the sixth child of Colonel Gould of Connecticut's 4th Fairfield Regiment. The Colonel was killed at the Battle of Ridgefield and his home was torched two years later. In 1788, Abraham married Anna and she persuaded him to pursue a career with the soil, having already lost three of his brothers at sea! They were among some 20-families who left Fairfield to settle in the Catskill region. Arriving at Stamford, some of the horses wandered off and in their pursuit Abraham and two others were directed by an early settler, Israel Inman, to the valley of Fall Brook. There, Abraham leased 150-acres from the Hardenburgh Patent in what became known as 'West Settlement' and later 'Roxbury'.

Several decades later, Jay Gould - who stamped his ticket out of Roxbury as a self-taught surveyor - wondered in amazement as to what could have possessed his grandfather to settle on such "barren and unpromising" land. It may have been picturesque, but the soil was only good enough for pasture and Abraham established himself as a dairy farmer.

In contrast to their life at genteel Fairfield, Abraham Gould and his family lived a tough, pioneer existence and despite his hard work, he never owned more than 20-head of cattle. But, he added to his income with an orchard and as the owner of the region's first cider-press. In 1796, Abraham's eldest son, John Burr Gould (Jay's father) was the first white child born at West Settlement, and after Abraham died in 1823, he inherited the farm.

Jay's father presumed to live, "in a little better style than the other farmers". His head had been imbued from a young age with stories of his more illustrious ancestors back in Connecticut which in later years led him to have airs beyond his means, and business ability. Life had not got an easier on the farm and while not rich, he nonetheless inherited a not uncomfortable house that his children recalled as having, "five large bedrooms" and a "large sitting room to the left of the entrance hall... dominated by a huge fireplace".

John's ambitions were also hampered by a lack of sturdy sons to help him out on the farm. After having five daughters, he finally had a son, Jay, but he was a weak, sickly child who was far more interested in books and numbers than getting his hands dirty. In 1851, John swapped the dairy farm for a house in Roxbury and with it a tin/stove business, hoping that his clever son with his gift for numbers could turn it into a success. Jay Gould had other ideas, and by the time his father died he was millionaire in New York City.

From 1851, A. Hamilton Burhans (1819-1899) - younger half-brother of state senator Edward Burhans - was the new owner of the Gould dairy farm. After he died, it was acquired by George Bouton (1846-1922) who that same year (1899) co-founded and served as the first President of the Cold Spring Co-operative Creamery Company, which continued up until 1936. George however died in 1922, and the Gould farm now became home to his son Charles (1882-1962), but he sold up in 1934. It was purchased that year by Lynn and Bertha (Slauson) Cammer, and they farmed here until Lynn's premature death in 1956. Five years later (1961), Bertha sold the farm and moved into a house on Locust Street in Roxbury where she lived until 2004. For a long time, she was a cook at the Kirkside Adult Home, originally the summer home of Jay Gould's daughter, Helen.

A History of Delaware County, New York: A Catskill Land and Its People, 1797-2007 By Tim Dureden

The Catskills: Its History and How It Changed America By Stephen M. Silverman & Raphael D. Silver

The Pioneers: The Heroic Story of the Settlers Who Brought the American Ideal West By David McCullough