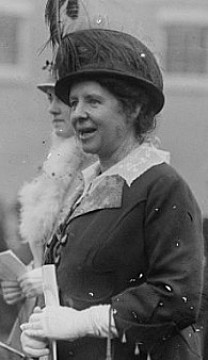 She was born in Manhattan and grew up between 579 Fifth Avenue and Lyndhurst in Tarrytown. Despite her father's public reputation as the most reviled man in America, in his private life he was as devoted to his children as they were to him. Perhaps to make amends for his many wrongs, Helen devoted her life to charitable causes, spending over two-thirds of her fortune doing so. Whereas her father died with the reputation of being the most hated man in America, she died with the reputation of being, "the best-beloved woman in the country".

Helen had grown up with the tradition that every morning at the breakfast table her father would distribute the letters he'd received asking for handouts between his children and it was their job to discern which were genuine and worthy of attention, and which were not. Helen was 24-years old when her father died and she received a $10 million share of his fortune and his house at 579 Fifth Avenue. Hiring three secretaries, she transformed the second floor of the mansion into a sparse, fit-for-purpose welfare office. Each day, the secretaries were tasked with going through her correspondence which included hundreds of "begging letters" and her chief secretary, Miss Altman, would then report back to Helen as to which of these required her attention. She was assisted by Margaret Terry (1820-1908) who joined the Gould household in 1877 as a housekeeper and was now Helen's companion and sounding board on the direction of her charity.

As an example, in just one week Helen recalled that the requests she received ranged from $15 for a new set of false teeth, to $1 million to found a colony abroad! She estimated that she would need $100 million a year to satisfy all those who wrote to her.

Nationally, she first came into the public eye during the Spanish-American War in 1898. After giving $100,000 towards the war effort itself, she gave an additional $50,000 for military hospital supplies and worked with the American Red Cross. After visiting wounded soldiers who had been returned to a hospital on Staten Island, she assumed control of the Women's National War Relief Association which she reorganized into an effective body. On one occasion when an administrative error resulted in vital supplies being withheld at Montauk, she immediately wired $25,000 from her own account to get them on the move.

She became something of a national heroine for her work in both the U.S. and Cuba, "to relieve the sick and wounded victims of the conflict". For this, she was awarded with a Congressional Gold Medal and she received over 3,000 personal letters from soldiers and sailors thanking her for her work - each one of which she preserved in a bound book.

Helen gave liberally to a wide variety of causes. For example, in the village of Roxbury where she kept her summer house, Kirkside, her gifts to the village included: a tarmac road; a gas plant; and, 10-acre lake providing an unlimited water supply and recreation.

The national charity closest to her heart was the Railroad Young Men's Christian Association, many of whose members had worked under her father - the same man who cut the pay of his Chinese workforce, who built him the largest railroad in the south west, to less than a dollar a day. Helen gave hundreds of thousands of dollars to this institution.

She and the equally philanthropic Mrs Russell Sage paid $500,000 for the new Y.M.C.A. building at the New York Navy Yard in Brooklyn. She personally donated the new library building at New York University, paid $10,000 towards its engineering school, and financed its Hall of Fame. She paid $200,000 for a new building for the U.S. Army at Fort Munroe and gave generously to help the public after the earthquake in San Francisco and the great Texas Flood in 1921. She gave four scholarships annually for girls to study at Vassar College, regularly contributed to Rutgers College, and was the backbone behind the Woodycrest Home for Crippled Girls and the Girls Sewing School in Lyndhurst.

Other organizations with which she worked included: the National Council of Women; the Business Woman's Church Members Club of New York; and, the National Save-a-Life League. She was a member of the Westchester County Women's Republican Club.

In 1895, she graduated from New York University's School of Law and she was seemingly the only one of her siblings to inherit her father's business acumen - albeit completely devoid of his ruthless, self-serving methods. She invested heavily in traction companies, notably in the larger southern cities. These were run by a small army of managers and secretaries, but they were all closely directed by her and once a year she made a 7,000-mile round journey in her private rail car to inspect her various business interests.

On her cross-country business trip in 1912 she was accompanied by one Mr Finley J. Shepard, assistant to Benjamin Franklin Bush, President of the Missouri Pacific Railroad etc. After something of a whirlwind romance, the two (who were both in their forties) were married at Lyndhurst only months later on January 22, 1913. They had none of their own children but in 1914 they adopted a 3-year old waif who'd been abandoned on the steps of St. Patrick's Cathedral in New York. In 1917, they also adopted the two daughters of Helen's brother, Frank, who spent increasingly more time in France than in the States. Soon afterwards they fostered another boy as a playmate for their first son.

The Shepards were unaffected by society life and while Helen's siblings were busy spending their millions building the likes of Hempstead House, Georgian Court, and the Palais Rose - to mention only a few - the only house she bought and did work to was her comparatively modest summer home, Kirkside, in the Catskills. She maintained her parents house at 579 Fifth Avenue as it always had been with very few changes, and only made improvements to the gardens at their country estate which she also inherited, Lyndhurst. She was passionate about flowers and horticulture, but charity remained her driving force and during her life she gave away over two thirds of her fortune.

Litigation over the Gould Estate

From 1916, Helen played a key role in the litigation over the administration of the $85 million family fortune from which she and all of her siblings received the residual income.  Her father had placed their eldest brother, George, in charge of the railroads and managing/investing the fortune wisely. But, during his time at the helm the fortune defied both the markets and inflation and dropped to $50 million, resulting in his siblings suing him for "malfeasance". George was struck off a trustee shortly before his death, but the ensuing legal upheaval was not concluded until 1927 at which point Helen resigned as a trustee and walked away as the recipient to the interest of a $13 million share.

Lyndhurst: A Guide to the House & Landscape By Amelia Peck