Built 1897, for Frederick Gilbert Bourne (1851-1919) and his wife, Emma Sparks Keeler (1855-1916). On its completion, Indian Neck Hall was the largest mansion on the South Shore of Long Island and was only later eclipsed by the likes of Oheka Castle and Inisfada. It is currently the 9th largest surviving house in the United States and in 2016 St. John's University sold the mansion to the Amity Education Group....
zoom_in 6 images 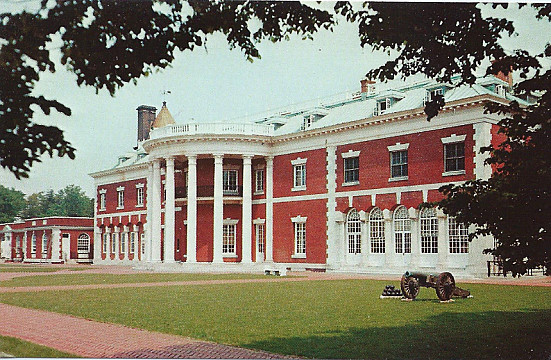 Frederick G. Bourne was the dynamic President of the Singer Manufacturing Company who oversaw its rise to become, "perhaps the first modern multinational industrial enterprise of any nationality". Out of the office, he developed passions for German automobiles and more particularly yachts, serving as the Commodore of the New York Yacht Club and sponsoring entrants to the America's Cup Race. Aside from Indian Neck Hall, he is also remembered for building Singer Castle that remains a prominent feature of the St. Lawrence Seaway on the fantastically named "Dark Island". When he died, he left an estate of $42 million to be divided among his seven surviving children.

In 1889, Bourne purchased Oakville Farm, a 438-acre property from local landowner William H. Ludlow (1821-1890), former Speaker of the New York Assembly. Eight years later (1897) he employed the architect Ernest Flagg (1857-1947), a graduate of the École des Beaux-Arts in Paris, to design and oversee the construction of a suitable home to stand on his now not-so-new country estate. This marked the beginning of a lifelong friendship between the two men and Flagg would later build Singer Castle too.

Flagg combined a Federal/Georgian-Revival exterior of red brick quoined with marble trim and two stately, columned corinthian porticos at the front and rear (the clock tower was added in 1912) with what he called "the modern French Renaissance" interior. The result was a massive 110-room, U-shaped mansion - 300-feet in length and 125-feet deep - built over two and a half stories and covering some 75,000-square feet of living space.

Bourne named his sprawling mansion "Indian Neck Hall" for the creek that ran through the property. Built on low-lying ground overlooking the Great South Bay, the 100-yard lawn that separated the mansion from the ocean had originally been marshland. The marsh had to be filled and packed with earth before work could even start on the house!

The Bourne family moved into their new home in 1900, by which time the estate had grown to encompass some 1,000-acres in Oakville and West Sayville. However, continued expansions and improvements carried on at the mansion until at least 1912, when the estate was then comprised of some 2,000-acres plus a modern working farm. The perpetual presence of workmen at Indian Neck Hall was not without its drawbacks, notably when a collection of diamonds worth $50,000 went missing in 1908!

The front of the house is just visible through the elegant 18th century wrought-iron gates off the Montauk Highway. Over a gentle ascent, it is approached by a long straight drive, or grand alleé, 1,700-feet in length and flanked by a noble avenue of trees either side. Back then, the hall sat surrounded by 160-acres of tranquil, landscaped gardens laid out by the great Frederick Law Olmsted (1822-1903) that included a three mile network of canals, spanned by a marble bridge that led to a picturesque trout pond.

Among the numerous outbuildings on the estate was the 80-foot long greenhouse to the right of the main house; stables that adjoined a six-car garage for Bourne's collection of German Mercedes-Benz automobiles; and, a boathouse approached by a waterway so deep that large yachts were able to sail directly up into the grounds.

Though only seven survived him, Bourne was a doting father of twelve children and his affection for them is reflected in rooms such as the roller skating rink under the verandah; the bowling alley under the conservatory; and, the indoor swimming pool. The family rooms upstairs were wainscoted in polished wood with a mahogany trim and other notable luxuries included the Turkish bath and a music room. Bourne had been noted for his singing voice when he was a child and in the music room he installed a huge Aeolian organ - possibly the largest on the continent - at a cost of $20,000.

Their moving in also happened to coincide with Mr and Mrs Bourne's 25th wedding anniversary. To celebrate, a party for 100 was held. The house was decorated throughout with white roses, lilies and azaleas; and, the drawing room was cleared for dancing while an orchestra played among palm trees. Among the many notable guests who attended that evening was Admiral George Dewey (1837-1917), hero of the Battle of Manila Bay.

The Bournes played a pivotal role in the local community at Oakdale. Every year they held a Christmas party at the Hall for the villagers and gave gifts to all the 300-children. It was here in 1910 that Bourne also undertook his final great project: to create jobs within the local community at the same time as making the estate self-sufficient. Acquiring further land from his distinguished neighbour, Admiral Nicoll Ludlow (1842-1915), he built a complex of concrete farm buildings with a distinctive windmill-shaped water tower that the Suffolk County News described as, "one of the show pieces of America".

Both Bourne and his wife died at Indian Neck Hall. His funeral in 1919 was attended by luminaries such as William Avery Rockerfeller Jr., Cornelius "Neily" Vanderbilt III, and J.P. Morgan, Jr. (1867-1943). The service was held in his beloved music room where a choir sang him on to the next world accompanied by his immense organ.

Having outlived his wife and five of his children, Bourne divided his $42 million estate between his seven surviving children. However, they squabbled over who should take what, prompting a local newspaper to quip that they seemed happier to share their inheritance with their lawyers rather than between themselves! In 1925, unable to reach a decision as to who should get the Hall, they sold the estate to developers for $1 million.

By 1926, for one reason or another, Indian Neck Hall remained in tact and the developers cut their losses, selling it on for $500,000 to the Brothers of Christian Schools. That same year, the Brothers established La Salle Military Academy and converted the Hall to that purpose. LaSalle was a notable institution, but closed its doors in 2001 when the Hall and its remaining 170-acres were purchased by St. John's University for their Oakdale campus. In 2016, it was sold to the Amity Education Group for $22.5 million.

The Sewing Machine By Natalie Fergie

Long Island and the Sea: A Maritime History By Bill Bleyer. Foreword by Billy Joel

Admiral George Dewey: The Life and Legacy of the Most Decorated Naval Officer in American History By Charles River Editors